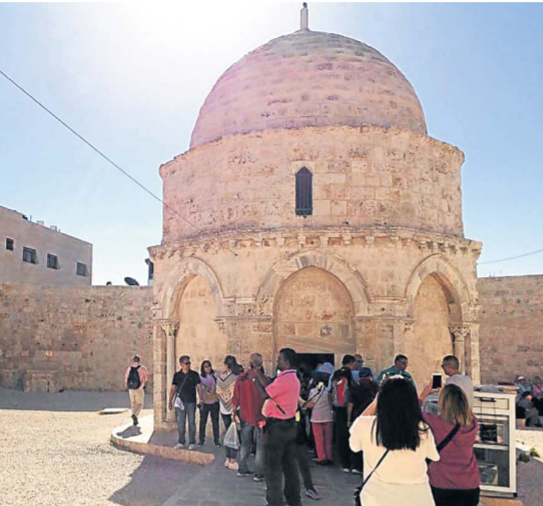 Pilgrims line up to the Crusades-constructed edicule housing the Ascension Rock.

It seems out of season for a Filipino Catholic to make the obligatory Via Crucis or Way of the Cross post-Lent and even post-Ascension Sunday, which this year fell on May 25. But this writer along with other Filipino travel addicts did just that early this June and right at the heart of Old Jerusalem.

The opportunity to track the Via Dolorosa, or the Way of Dolors or Sorrows, was afforded this writer and travel executives by Cathay Pacific, which has opened a new four-times-a-week flight from Hong Kong to Tel Aviv. The new flights with their affordable price rates should encourage more Filipino Catholics and other Christians to make the pilgrimage to the Holy Land.

One advantage of making the Via Dolorosa post-Lent were the thinning crowds. Compared to the pandemonium of Holy Week and Easter, post-

Ascension Jerusalem was bliss. The minus here was the creeping summer; at least Lent had taken place in spring, which should have alleviated the mass hysteria and claustrophobia in Jerusalem.

Still, when we did our pilgrimage, the temperature pleasantly teetered between 19º and 22º Celsius, not bad for pilgrims scorched and scalded by the perennial Philippine summer.

But because our Asia Tours guide Mendy Gonda perhaps knew we Filipinos had been through worse summers, and also because he was a Jew who obviously wanted a little more appreciation for the history of Jerusalem and her people and not alone the history of salvation of Christians, he took us on a long, literally biblical route that ran the gamut from Genesis to the Apocalypse. The result was sometime physically challenging but also intellectually stimulating and spiritually exhilarating.

Quite anticlimactic that we should start Via Crucis on the site where Christ was believed to have ascended to heaven. But Catholics, especially Filipinos, have often been accused of masochism for alleged excessively dwelling on the Passion and Crucifixion so that they stay there prostrate, transfixed, immobilized and marooned without progressing to the Resurrection—so for us self-flaggelating brown pilgrims to skip the Passion and go even past Easter and fast-forward to the Ascension was progress, indeed.

Moreover, the Ascension site is not a church but a mosque! In fact, Fr. Jerome Murphy-O’Connor, OP, in his best-selling “The Holy Land: An Oxford Archaeological Guide” (fifth edition, 2008) called it the “Mosque of the Ascension.” It is under the authority of the Islamic Waqf of Jerusalem.

How a Christian site has become a Muslim possession should disclose the multilayered history of Jerusalem, one of the oldest cities in the world. Israel itself has been at one time or another under the Egyptians, Assyrians, Babylonians, Greeks, Romans, Persians, Crusaders, Ottomans and European colonialists.

Ascension Rock is a slab of stone said to contain the right footprint of Christ before he went to heaven. (The left footprint is at Al-Aqsa Mosque also in Jerusalem.) An octagonal edicule, constructed by the Crusades, houses the slab. The Muslim restoration of 1200 largely preserved the Crusader edifice since “though not mentioned in the Koran,” wrote Father Murphy-O’Connor, “Muslims believe that Jesus ascended into heaven.”

One reason why Gonda made Ascension Rock our first stop was that it was located on Mount of Olives. He would like us to enter Jerusalem the way Jesus would have done 2,000 years ago—via descending from the Mount of Olives.

Along the way too, Gonda made us survey the ancient Jewish cemetery around the Mount of Olives, with tombs dating back 3,000 years ago.

Since the 19th century, Jews of the diaspora have sought to return to Jerusalem in their old age to be buried in its hallowed grounds, said Gonda.

Church of the Pater Noster

It was but only proper and instructive to start our tour of Mount Olives by visiting the Church of the Pater Noster, the Roman Catholic church and Carmelite monastery on French possession (again the multilayered history of Jerusalem) that used to be known as the Church of the Eloana, the latter being Greek for “olive grove.”

Constructed in the 4th century during the Byzantine era and destroyed by the Persians in 614, Pater Noster church was built only in the 20th century after the discovery of the ruins of the Byzantine sanctuary and it was so named because the old Eleona stood right next to the traditional site of where Christ was believed to have taught the Our Father.

The Dominican biblical scholar did not elaborate, but it must be pointed out that the Lord’s Prayer as we recite it now is a synthesis of the two major accounts of the classic prayer from the Synoptic gospels of Matthew and Luke.

The prayer is barely mentioned in Mark, the earliest of the three Synoptic gospels (“…forgive whatever you have against anybody, so that your Father in heaven may forgive your failings too” [Mark 11:25]).

But while Matthew’s account shows Jesus making the prayer during the Sermon on the Mount (that is, in Capernaum by the Sea of Galilee), Luke and Mark mention it in the context of Jesus’ journey to Jerusalem and his eventual Passion, with Mark more specifically situating the teaching on how to pray in Jesus’ approach to the Holy City via the Mount of Olives.

Hence, the convergence between Eleona and Pater Noster.

Murphy O’Connor pointed out that the tradition seemed to have been carried over by the Crusades that constructed an oratory, a prayer chapel, on the ruins of the Eleona.

Moreover, 12th-century accounts by pilgrims said a marble plaque used to hang in the loca tion with the Lord’s Prayer in Hebrew; another was said to have been inscribed in Greek. At the turn of the 20th century, excavations discovered a Latin version.

Nowadays, pilgrims could find at least 100 versions of the prayer in the church and cloister.

Mendy proudly led us to the Tagalog version. He asked us to recite the prayer and he expressed delight that Tagalog sounded much like Hebrew.

But I checked around and told our astounded Jewish guide that there were also versions of the prayer in the church in the “other Philippine languages,” such as Pampango and Cebuano. “Why, how many languages does the Philippines have?” he asked.

When he learned the number could run from at least 87 to more than 150, Mendy gasped: “The Tower of Babel!”

Outside, in the cloister gardens, I found a version in Ilonggo.

We proceeded to the Church of the Dominus Flevit (The Lord Wept), so called because the spot where the church was built was supposed to have been where Christ broke down and wept as he foretold to the apostles the destruction Jerusalem (Luke 19:41-44).

The modern church by the great Franciscan friar-architect Antonio Barlucci had been built only in the first half of the 20th century, but the early Christians had always believed the spot to be where the Christ made his tearful prophecy, and even the Crusades later built a church in the same place.

There atop Mount of Olives, which rises some 100 meters above the city, we were afforded a magnificent view of old Jerusalem.

In the foreground where the platform of the Jerusalem temple used to stand was now the Dome of the Rock, the golden-crowned mosque that was the center of Islamic worship since the 7th century.

To the north was the School of Omar built on the Fortress Antonia where Christ was tried and condemned by Pontius Pilate and the mob.

To the west was the tower of the Church of the Holy Sepulchre and the citadel of the Tower of David built by King Herod the Great and restored by the Crusades in the 12th century.

Then to the southwest were Mount Zion and the towering Church of the Dormition of the German Benedictines.

Instead of Damascus Gate, we entered Jerusalem through St. Stephen’s Gate in the east from the Mount of Olives.

Gonda made us trek from the Mount of Olives so we could see the awesome panorama of the Jerusalem of his devotion, nation, privation and destruction, the latter predicted of course correctly by Jesus.

All at once, I remembered Jesus’ lament and prophecy: “Jerusalem! Jerusalem! You who kill the prophets and stone those who are sent to you! How often would I have gathered your children together, as a hen gathers her young under her, but you would not! Behold, your house is left to you desolate!” (Matthew 23:37-39)

But reaching the gate and spot traditionally believed to be where the first Christian martyr was stoned to death, we found a strict checkpoint of several Israeli soldiers.

It was then we realized that we were making the Via Dolorosa at the start of the month-long Muslim feast of Ramadan!

But whether Mendy was aware of it or not, early Christian pilgrims making the most remote beginnings of the Via Dolorosa during the Byzantine era really entered the city through St. Stephen’s Gate, according to Father Murphy O’Connor.

St. Stephen’s Gate therefore should reflect the persistence of Christian memory against the latter Muslim hegemony in Jerusalem.