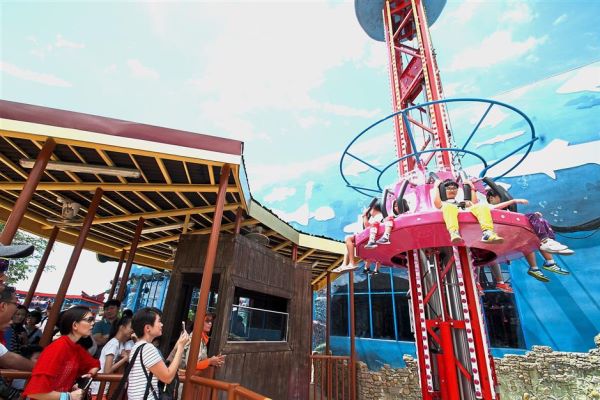 Young visitors brave it out on the Whirling Wizard, a child-friendly drop tower at the Fantasy Forest Zone of Movie Animation Park Studios (MAPS) in Ipoh on June 26, the first day of its soft opening. THE STAR/ASIA NEWS NETWORK

IPOH—Fans of local hero BoboiBoy, Smurfs and Dreamworks Animation Studio can now relive their dreams and enjoy their company right here in Malaysia.

They were among the first to experience the country and Asia’s first animation-centered theme park, costing RM520mil (P6.1 billion).

Adults converged at the Stunt Legends Arena where South-East Asia’s first thrilling car and bike live stunt shows were performed. And the children joined BoboiBoy and friends in an exciting 4D motion adventure on the Floating Island.

“It was my first experience in a 4D theatre. I must say it was pretty intense,” said the 40-year-old, who was with his wife and two children.

“We were sprayed by water and felt jolts of lightning.”

At the Fantasy Forest Zone, one of six themed zones offering over 40 attractions within the 21ha theme park, K’ng Wen Fei, six, braved the Whirling Wizard, a child-friendly drop tower with her brothers Yu Hai, 10, and Yu Shien, nine.

Young visitors braving it out on the Whirling Wizard, a child-friendly drop tower at the Fantasy Forest Zone of Movie Animation Park Studios (MAPS) in Ipoh on June 26, the first day of its soft opening.

Young visitors braving it out on the Whirling Wizard, a child-friendly drop tower at the Fantasy Forest Zone of Movie Animation Park Studios (MAPS) in Ipoh on June 26, the first day of its soft opening.

“I wasn’t scared at all. I can’t wait to grow up and ride on the Megamind Megadrop,” she said of the country’s tallest drop tower that descends 52m within three seconds at the Dream Zone.

“We’re spending a really special Hari Raya together this year.”

“We are very satisfied with the overall operations, including aspects of safety and security.

“Some minor hiccups will be addressed promptly so that the people can enjoy themselves thoroughly in the park,” he said.

Ramelle said plans were in the pipeline for more new attractions, including a roller coaster ride, while The Dream Zone and a few more rides were under “technical rehearsals”.

He expressed confidence that MAPS would receive about one million visitors a year. “May be, even 1.2 million,” he said.

“In addition, we are also working closely with local and foreign tour agents, Tourism Malaysia and Tourism Perak to promote MAPS,” he said.

In conjunction with the soft opening, those who purchase Day Passes at RM131 (P1535) for adults and RM104 (P1220) for children and senior citizens via www.mapsperak.com until Friday will receive complimentary entry tickets for a second visit.