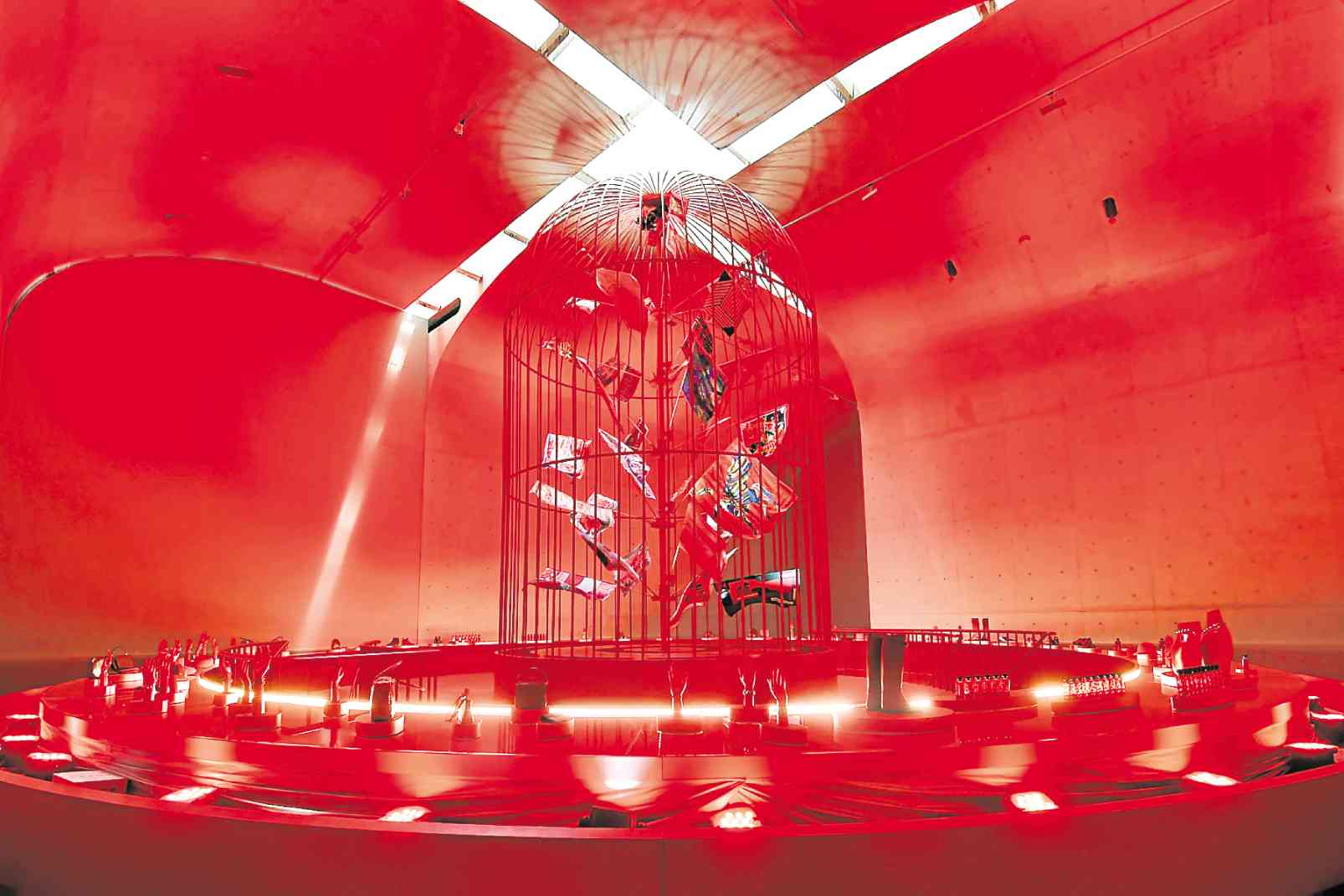 In huge Shanghai bash, Hermès lets its hair down . . .

Does Hermès consider factors such as cost and return on investment when it stages an event of this scale?

I asked Antoine Platteau, Hermès’ director of window design at the Faubourg Saint-Honoré flagship in Paris, the afternoon before the brand welcomed 1,200 guests to Hermès Club, a one-night club-theme party in Shanghai a fortnight ago, to celebrate Hermès’ Women’s Universe, its vast offering for female customers.

The storied French luxury house fetes Hermès’ Women’s Universe each year in key cities like Paris, New York, and, just last year, in Beijing. It held the same in Shanghai in 2014.

Long Museum West Bund, in a sprawling complex, is the largest private contemporary museum in Shanghai.

That evening, as we entered The Lock Hall—adorned with a larger-than-life version of the sliding door latch that’s found in Hermès Verrou bags—the first room in the elaborate, fantastical tableau called Hermès Club, I realized just how naive I must have sounded to Platteau, who simply replied there’s “no question of cost—it’s a party where we invite people, get to know them, and for us to express our view to them for one night.”

That’s the culture at Hermès—there’s free artistic expression among creatives, Platteau said. They never begin with how much a project or a product would cost; they’re encouraged to explore artistry.

When he designs windows, “it’s not about the product, that’s not the point,” Platteau said. “We’re not asked to show this, or that. It makes it more a pleasure. It’s more of a conversation. There’s no marketing. It’s more like giving an idea and sharing the soul of the house, but not with this bag or that. People are waiting for this bag, but we don’t show it just because they want to see it. We try to give a different point of view.”

At the Hermès Club, Platteau and company created nine different rooms that reflect just how Hermès “could be very fun also.”

It may have a very traditional and conservative image but they can break rules, too, he said.

Pierre-Alexis Dumas, the brand’s artistic director and a member of the founding family, “never tells us you can’t do this or that. Sometimes he’s surprised, but he never says no,” Platteau said with a laugh.

In directing the show to present Vanhée-Cybulski’s apparel collection, Goude—most known for his iconic images featuring Grace Jones—was given carte blanche. He chose to pay homage to the iconic Hermès orange box with a dance performance by a flamenco star, Rocio Molina, where 20 models were also seen marching out of massive orange boxes.

As the guests were ushered to the next room after the show, the theater aka The Music Hall—decorated with glass walls and those distinct orange boxes—was quickly dismantled and remade into The Billiard Room, a sort of gaming room with a billiard “table” more akin to a mini bowling alley. It would be the guests’ final stop in the evening’s bash.

In the other rooms were showcases of the house’s luxurious objects, some more overt than the others. The Chain Gallery had walls covered in Hermès wallpaper, the brand’s emblematic chaine d’ancre dripping from the ceiling, their ends tied with bottles of Galop d’Hermès, the women’s fragrance launched late last year.

On the other side of the room was The Bangle Bar, where LBD-clad bartenders served champagne—but only their upper torsos and arms bedecked with Hermès enamel bangles could be seen.

The centerpiece of The Red Ballroom—it was really all red—was a massive rotating birdcage, imagined by Goude, and bore one-off silk scarves by Barret. Around it below was a circular dance floor of sorts, where shoes, bags and perfume bottles waltzed on moving little platforms.

The Members Room was a showcase of all things Pierre Hardy—a monochromatic space bearing his jewelry and shoes for the brand, and a selection of purses, including a large black Birkin and a Kelly with a bejeweled strap.

The all-pink The Powder Room had vignettes showing silks, shoes and apparel. At The Night Club, guests were seen dancing against a portrait gallery of “members and benefactors.”

At The Valet Service, where the centerpiece was an apple-green “limousine” photo studio, the walls were lined with Bolide and Kelly bags. There were also multicolored purses, including a Birkin for Fall 2017, in “One Two Three and Away We Go” printed Swift calfskin.

As for the 1,200-strong crowd, composed of the brand’s top brass, VIP customers and international press, it would not be an exaggeration to say this writer hasn’t seen that much wealth under one roof in the form of bags alone—and I’ve covered my share of similar such parties and size hosted by other global luxury brands.

The marked difference, I thought, was that while Hermès objects and motifs are recognizable, and many of us know the luxury they represent, the style and imagery is largely understated. They’re devoid of that flashy, in-your-face and discomfiting display of unimaginable fortunes more synonymous with other luxury brands.

I also spotted at least two women with the fabled and famously rare Himalayan Nilo crocodile Birkin, which has been fetching record figures at Christie’s auctions—and costs even more at retail if you could get your hands on it.

At the lobby of the Peninsula Shanghai, where many of the Hermès guests were housed, every man or woman you bumped into was invariably carrying an Hermès bag. Imagine a random day at a Manila mall, but replace the sea of Uniqlo, H&M and Zara shopping bags with Birkin purses—in every imaginable color, size and fabrication.

Little wonder cost is no question for an event like Hermès Club. Not long ago, Hermès beefed up its leather production facility in France to meet the demand of the Asian market. Because while its affluent customers in sophisticated markets have moved on to acquiring other items from its vast selection of luxe merchandise, including bespoke furniture, it’s clear leather goods—primarily handbags—are still cardinal.

In China alone, it has 23 boutiques, including one of only five Hermès Maisons in the world, located in Shanghai.

The brand reported a 16-percent sales growth in Asia, excluding Japan, for the first quarter of 2017. During the same period, its global sales increased by 15 percent—and that’s just for leather goods.

Hermès is at Greenbelt 3, Makati City.