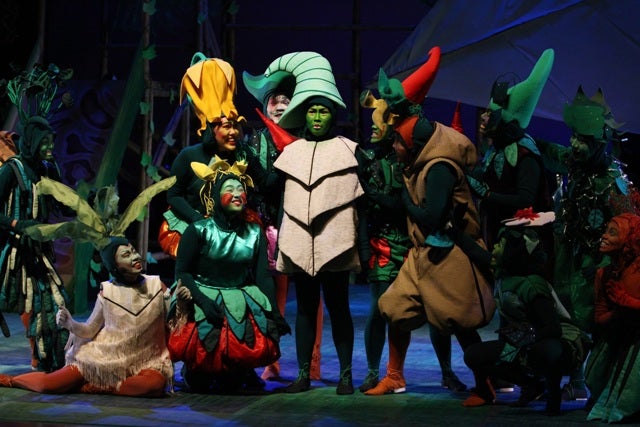 John Carlo Pagunaling’s costume designs for “Ampalaya the Musical” will be exhibited under the Emerging Designers category at the 2017 World Stage Design (WSD) event in Taipei, Taiwan.

Held every four years, the event showcases set, costume, lighting and sound work by designers from around the world, chosen by an international screening panel.

The works of three other Filipino designers—Mio Infante, Gino Gonzales and Jethro Joaquin—will be exhibited under the Professional Designers category.

“Ampalaya the Musical” is based on Augie Rivera Jr.’s children’s story, “Alamat ng Ampalaya,” on how the vegetable acquired its bitter flavor. It has music by Michael Dadap and libretto by Dadap and Patty Yusah. Music direction was by Elizabeth Vista-Suarez and direction was  by Dessa Quesada-Palm.

Produced by Silliman University, the show ran in Dumaguete City in 2014 and 2015. It had a performance at the Cultural Center of the Philippines in 2015.

Born and raised in Bulacan province, Pagunaling’s interest in theater began in high school at St. Mary’s College of Meycauayan, where he became president of its theater organization, Sining na Malaya.

“My teacher, Ms. Adaon, recommended that I audition for University of the Philippines (UP)’ theater arts program,” he says.

In college, he first did costumes for DUP’s staging of “Tatarin.” Apprenticing in set design under Tuxqs Rutaquio, director Jose Estrella for “Sepharad: Voces de Exilio” and in costume design under the late Ogie Juliano for a trilogy of Severino Montano one-act plays steered him towards deciding on a future career in production design.

His first break professionally was working as John Abul’s associate designer for the costumes of Peta’s “Care Divas.”

To constantly learn more about his craft, Pagunaling has taken clothing and textile classes at UP’s College of Home Economics and is currently taking dressmaking classes at Slim’s Fashion and Arts School.

He says the decision to commit is the first step for any project. “If I’m willing to give my 100 percent to a particular production, I’ll join the team and finish the race, whatever happens.”

His process begins with reading the script several times. “I analyze it using Jacques Lacan’s three psychoanalytic orders of symbolic, real and imaginary,” he says.

Research is the backbone of his design. “I always go to libraries, museums, galleries. I also use magazines, films, interviews and credible internet sites like Project Muse.”

He then collaborates with the director and the other designers (lighting, set, sound, etc.) to craft a “master symbol” or “master concept,” which he then translates to costume design.