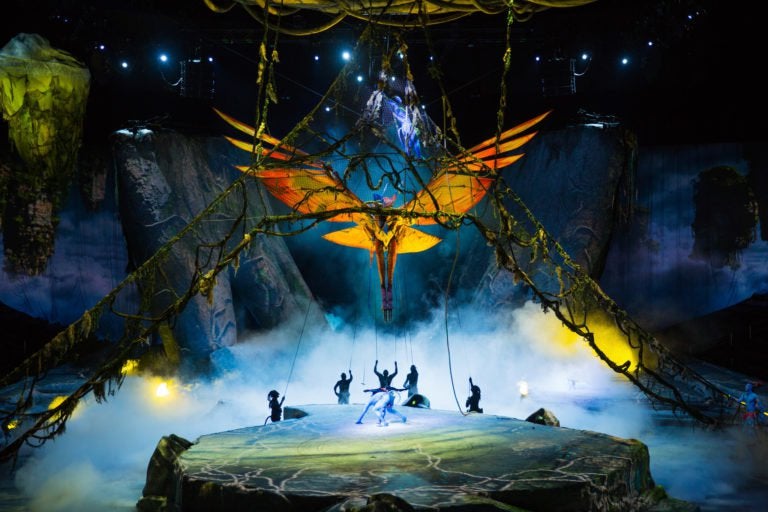 “Toruk” happens thousands of years before “Avatar.” It tells the legend of how a handful of young hunters saves the planet from a cataclysm.

“Toruk: The First Flight,” Cirque du Soleil’s latest show to perform in Manila, is a hybrid of its dazzling circus routines, plus well-conceived theatrical and cinematic touches that surprisingly heighten the experience.

It appears to have helped that Cameron had a say in the conceptualization and execution of “Toruk.” He had earlier collaborated with Cirque in “Worlds Away,” a 3D film retelling of one of its performances. It was only a matter of time before the gravity-defying landscapes of “Avatar” and its nimble creatures would become the next setting for Cirque’s brand of stage storytelling.

“Toruk” happens thousands of years before “Avatar.” It tells the legend of how a handful of young hunters saves the planet from a cataclysm.

One of their challenges is ensnaring the dreaded monster bird Toruk to use it in their quest.

What’s striking about “Toruk” is that there is actually more theatricality than acrobatics. While many of the blue-skinned Na‘vi hoist themselves up on elevated vines and do a lot of balancing acts on skeletal dinosaurs, the jaw- dropping somersaults one usually associates with a Cirque show are gone.

The characters don’t emote in the dramatic sense of the word. These acrobats-turned-semi-actors bicker, brawl, make peace and catapult themselves into the various rainbow pieces on stage using their bodies to express their emotions.

But, despite the absence of dialogue, the characters get the audience invested in their journey. Cowriters and codirectors Michel Lemieux and Victor Pilon make Pandora’s many lands and creatures feel powerfully tactile. The circular structure of the SM MOA Arena stage gives added depth and layering to the proceedings, as opposed to the usual 2D stage setup that often distances the audience from the stage proceedings.

At centerstage, a moving platform orb turns into a tribal assembly hall one moment, then the base of a towering green forest the next. Colorful mantles of cloth blossom become either tree-like flowers or the butterfly wings of the more magical Na’vi. Gallons of water also literally flood the stage during the deluge. And the backdrop projects an endless horizon showing the rise and fall of Pandora’s many moons—and, as a buildup, the shadowy trajectory of the fearsome Toruk.

Cirque’s latest show combines the best of film, classical circus and theater to present what feels like a fresh experience of stage spectacle. At the same time, it knows how to swing its rare emotional punch. The reveal at the end—uttered by a shaman-storyteller without aid of any prop or acrobatic feat—caps the show with stirring flourish.