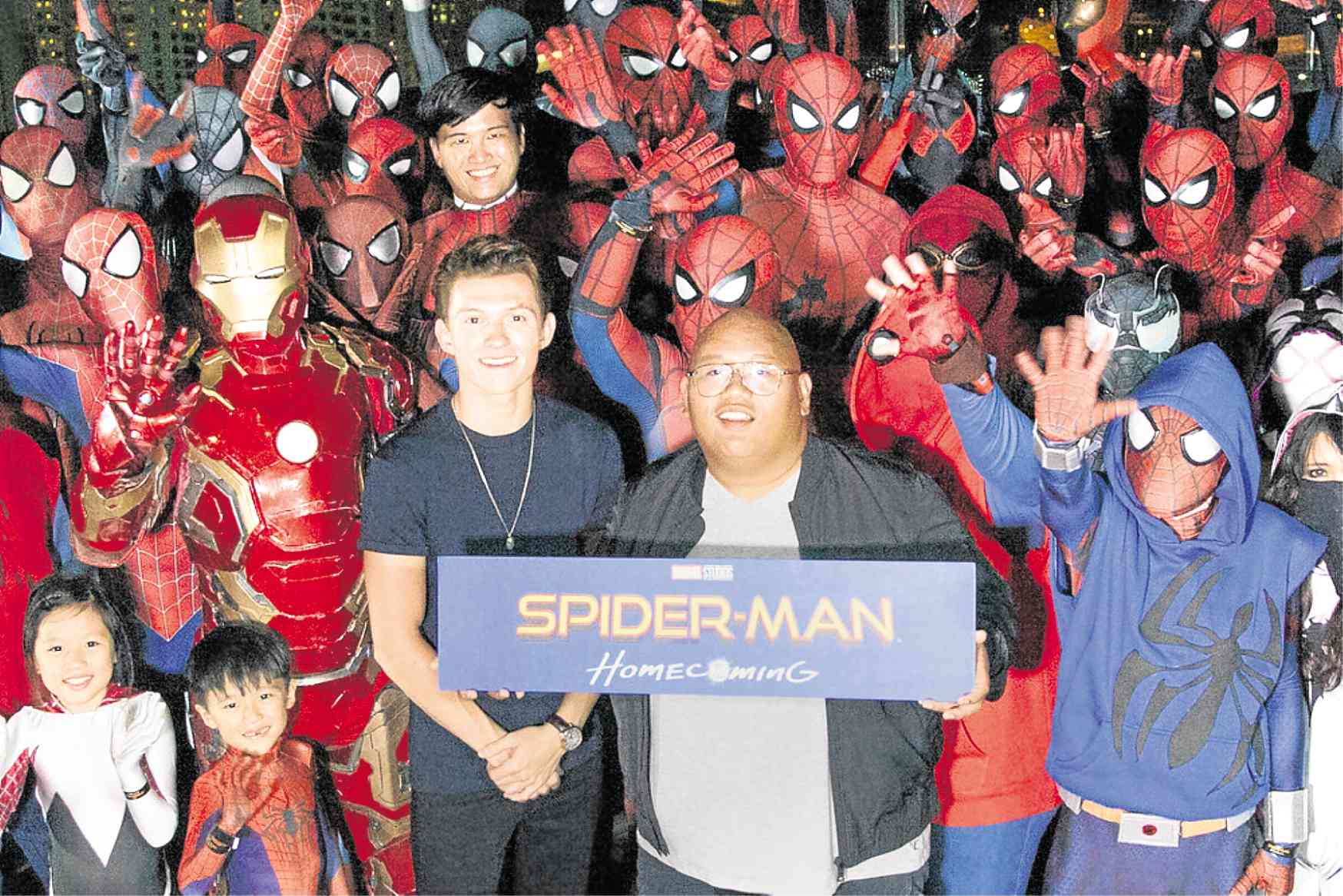 Tom Holland and Jacob Batalon had a marvelous time posing with fans at the Marina Bay Sands in Singapore. —PHOTOS COURTESY OF COLUMBIA PICTURES

As far as Jacob Batalon is concerned, he has the best gig in “Spider-Man: Homecoming.” He plays Ned Leeds, Peter Parker’s best friend at Midtown Science High School in the Marvel Cinematic Universe (MCU). “The best friend of a superhero can tell all the stories,” he tells Super. “Being a sidekick is great because you don’t have with the heady crazy things superheroes have to deal with.”

Ned Leeds actually first appeared in the comic book “Amazing Spider-Man” # 18 as a Daily Bugle reporter, in “Spider-Man: Homecoming,” he has been recast as a 15-year-old high school student of Asian descent. Batalon is the first actor of Filipino descent to appear in an MCU film. “We just got the name and kind of made him all up,” Batalon explains. “Jon Watts gave me a lot of creative control over what Ned Leeds should be and I was able to make Ned Leeds what he is.” Additionally, Batalon says portraying Ned has been good for him: “Ned is the one who’s affected me in real [life]. Ned is this really open and bubbly person and, because of that, I’m a lot happier in real life.”

Batalon was heavy into theater prior to coming to film. “The first time my manager came up to me, it came as an unnamed Marvel project,” he recalls. “It wasn’t until I did the screen test with Tom (Holland) that I knew for certain it was Spider-Man.” The property has meaning for him: “The first superhero film I ever watched was the Tobey Maguire Spider-Man, so it’s all come full circle for me.”

Both his parents are from the Philippines, of course. Batalon was born and grew up in Hawaii. “I grew up in a very typical Filipino household. Everyone spoke Filipino, everyone ate the food, everyone sang karaoke. Everyone loved having a good time.” He savors a serving of sinigang or adobo.
This Singapore swing is actually Batalon’s second trip to Asia. He visited the Philippines when he was 4. “I’m really thinking about it,” Batalon says of a return to the Philippines.

Batalon’s other big love is music, as he plays the piano and ukelele. His diverse playlist includes a lot of rap, jazz and R&B, with a range of artists from Stevie Wonder, Michael Jackson, David Bowie and Kendrick Lamar. Batalon would love to have a career in music as well.

Right now, he’s busy with films. He loves spy films and independent films, his favorites include Orson Welles’ “Citizen Kane” and anything by Martin Scorsese. He’d love to work with Leonardo diCaprio, do a comedy with Seth Rogen and James Franco (he’d be perfect) and another big goal would be to appear in a Star Wars film.

Batalon just finished “The True Don Quixote,” in which he plays another famous sidekick, Sancho. There’s already a “Spider-Man: Homecoming” sequel scheduled for 2019. He’s ready for that. “Yeah! Let’s do it for 10 years! Let’s do it till we’re old!”

Batalon’s favorite moment in the whole “Spider-Man: Homecoming” experience was breaking the news to his mother. His manager phoned him months after the audition, just as he was walking fast through New York City toward Grand Central Station. “I didn’t think I was going to get it. I started screaming and yelling on 42nd street,” he says. Two weeks later, he took his family to an Applebee’s and did the big reveal there. “Honestly, the best moment was when I told my mom, the way she reacted. Seeing her get so happy and giddy showed me that I’m becoming an adult.”

MCU supporting characters such as Gwyneth Paltrow’s Pepper Potts and Stellan Skargard’s Dr. Erik Selvig have also made appearances in the Avengers movies and that’s something Batalon would get into. “I will hope so. I’m keeping my fingers crossed. The idea just gets me.”

He had a great time on the “Spider-Man: Homecoming” set, maybe too much of a great time. “He kept coming back to the set and hanging out even after his scenes were shot. You do know they’re not paying you for this,” remarked Holland. The two have become really good friends since, sharing the grind and the glory of the press tour and the prospect of working together in the franchise’s coming films. “It’s great being written as best friends for life,” Batalon admits.

“Spider-Man: Homecoming” has changed his life almost completely, thrusting Batalon into a completely new reality. “I’m just going through the process of doing something big,” he says. “To be part of something so great is amazing.”

Jacob Batalon is about to make his own superhero jump and he’s so ready: “I’m really proud to represent the Philippines and to represent Hawaii. The fact that it’s happened on such a big scale, I really do appreciate being that guy.”