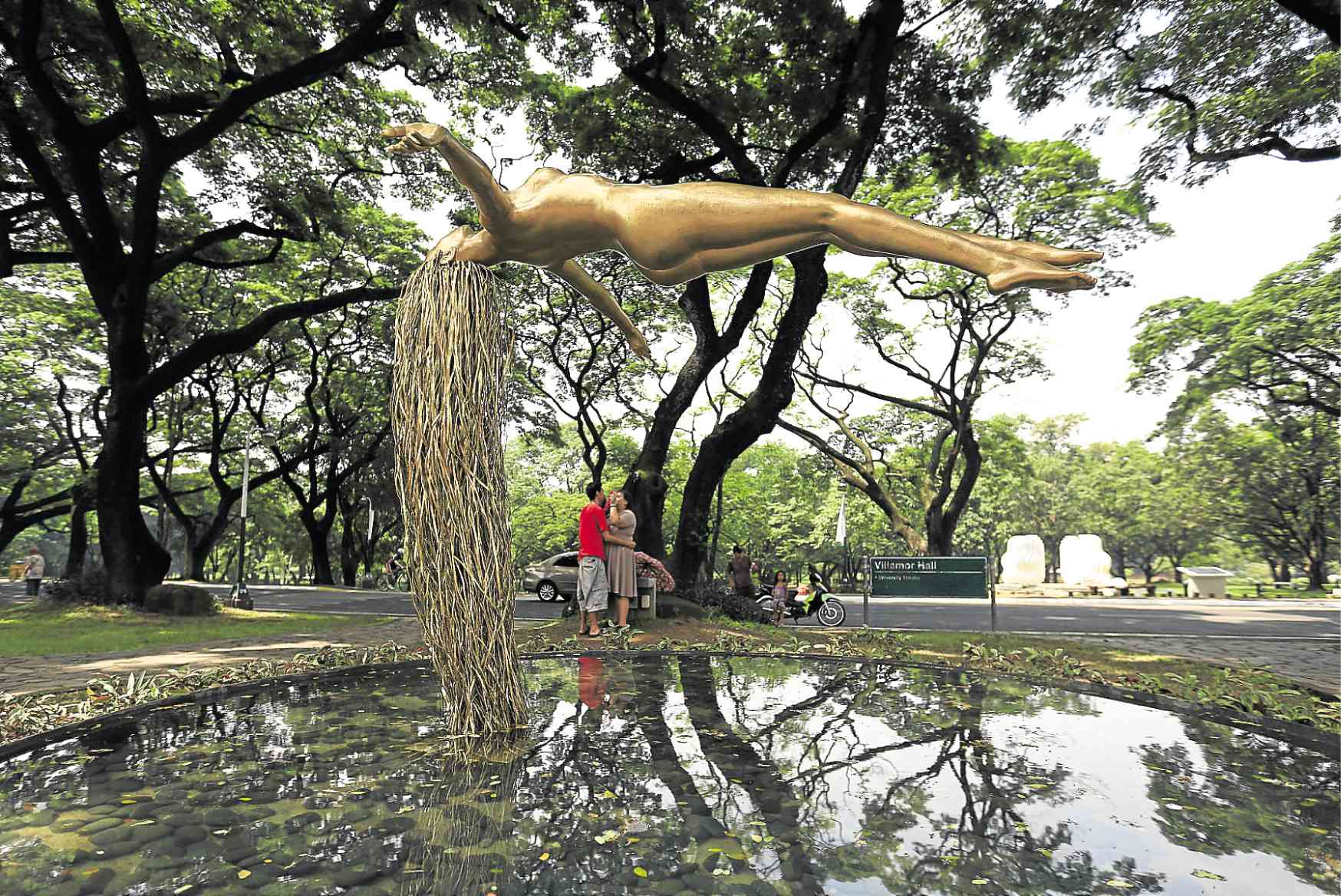 The controversial masterpiece of a famous sculpture artist Ferdinand Cacnio titled "UPlift" at the facade of Villamor Hall, University Theater, inside UP Diliman -EDWIN BACASMAS

There she lay, naked and gleaming golden in the sunlight, arms outstretched as if offering herself to the heavens as she floated up, up, up, transported by some kind of rapture.

It was a Thursday morning, and being the semestral break, the UP Diliman campus was nearly deserted, save for a small crowd of curiosity seekers and selfie snapshooters who had gathered in front of the UP Theater to see what the fuss was all about.

For the last week or so, social media has been abuzz with the controversy surrounding the so-called “female Oblation,” sculptor Ferdinand Cacnio’s statue of a levitating female nude that had been recently installed as one of the university’s public artworks.

Not since Mideo Cruz’s supposedly-blasphemous “Politeismo” six years ago has an artwork generated as much heated debate.

Perhaps it was fallout from the recent fiasco surrounding the Department of Tourism’s promotional ad for the country, which turned out to have been copied from an eerily similar South African ad, but Cacnio soon found himself hounded by accusations of plagiarism.

No sooner had his statue been unveiled when netizens quickly pointed to its similarity to one of “The Virgins of Apeldoorn,” a public sculpture by Elisabet Stienstra which had been installed in a park in Holland in 2001.

In response, Cacnio protested that he was totally unfamiliar with the aforementioned Dutch artist and her work, and his defenders were quick to post photos of his other work in a similar vein, female figure studies in various poses, suggesting that “UPlift” (the artist’s actual title for his sculpture) was well within the evolutionary stream of his art.

Originality, however, wasn’t the only issue raised by critics. It seems Cacnio has also run afoul of the PC (political correctness) police.

Feminists accused him of perpetuating the patriarchal male objectification of the female body with his work.

Cacnio may have made himself an easy target by giving his statue Victoria’s Secret model proportions, rather than abstracting her in the Henry Moore manner, or desiccating her à la Alberto Giacometti, or any such stratagems used by artists to sidestep the sexual fetishization issue. In the age of body dysmorphia, body shaming and other body image issues, it seems, a male artist represents the female figure at his own risk.

“In fairness, re: plagiarism, I would give him the benefit of the doubt; there are many artistic efforts in gravity-defying portrayal of human beings. The other concern is the imaging of woman as object, of being gazed at. Before passing judgment, there is need to clarify whether ‘UPIift’ is officially meant to be a female counterpart of the Oblation. Articles cite that it developed from a call of UP during its past centennial celebration for art to publish in an expensive coffee-table book of drawings of nude women. In that landmark occasion, why did UP at all choose nudes as subject, and not a more fitting theme, whether nude or clothed, like women in their strengths, as partners with men and other genders, in nation-building. If Cacnio’s work 10 years in the making for a public institution is, indeed, official, it should have been reviewed and approved by an academic, critical body, and if woman is a theme, the university should have consulted its Center for Women Studies.”

In another social media post, the artist’s daughter, a UP student, defended her father’s work and said that, while partly inspired by Guillermo Tolentino’s Oblation, the statue was not intended to be a female counterpart, or partner, to it.

In fact, “female Oblation” was a name that gained currency only in social media.

“I think this pose was specifically chosen to become public art in UP Diliman, because it embodied ‘UPLift,’ and UP the most,” she wrote. “There is a pride and freedom that I see in the arch of her back as she rises to honor and excellence, as she offers herself to our country and God. Her arms open, welcoming and embracing knowledge.”

Of course, a man whose lower brain is hard-wired with certain unconscious and perhaps even atavistic responses to the female form may not necessarily see “UPlift” as the artist intended: he might be more likely to automatically check out the figure’s ass, perhaps after noting the seemingly erect nipples.

As one online commenter, a semiologist, no doubt, said about “UPlift,” she was concerned about “the semiotics” of the piece. Meaning, the female figure is so loaded with symbolisms and meanings: Can one really control what viewers read into a work of public art?

To further illuminate the questions raised by Cacnio’s piece, I consulted two artists who have deeply examined the feminine form in their own work over the years.

Arellano compares Cacnio’s levitating woman with the well-known statue of a giant faucet floating in the air with water pouring out of it.

“In terms of visual gimmickry, it’s the same principle,” she says. “It’s eye candy. It puts you in a state of disbelief. But after that visual gimmickry, what is left? What is uplifting about it, apart from the literal meaning of the figure being lifted up physically? What values does it leave you with?

“It doesn’t edify the female form,” she continues. “It’s only for visual delight and display. I can see it in a mall. But in an academic institution? It offends certain feminine sensibilities.”

Artists, she suggests, have to be careful how they represent the feminine archetype. In creating female figures, for instance, she carefully considers the body’s proportions to avoid arousing the baser instincts of the viewer.

“Although sexuality isn’t base, it’s also sacred,” Arellano hastens to add. “But I’m also careful that my figures are nude, not lewd. But how do you un-lewd?”

She cites the ancient temple of Khajuraho in India, whose entire surface is enveloped with copulating figures that are clearly intended to inspire lust. But inside, there is only the central altar, which consists of the Shiva lingam (penis) atop the yoni (vulva), representing the cosmic union of male and female energies in the universe.

Representations of women have also played a central part in sculptor Julie Lluch’s oeuvre. Whether it’s her self-portraits in terra cotta at various stages in her life, her portraits of real-life women (mostly friends and family) and wholly imagined works, Lluch’s women for the most part exude a solidity and self-possession as they gaze out at the world.

With the caveat that she had not seen the actual sculpture in real life and only in images on the Internet, she said the artist should be given the benefit of the doubt when he denied the charges of plagiarism.

“I wouldn’t make too much of it,” she says. “Some figures are so universal. A figure resting with the hair serving as support—even I have done it. Imitation is also natural. There is also such a thing as appropriation.”

She cites her own appropriation of works by Picasso, whose works she admired as much as she hated his patriarchal attitudes.

“The thought of plagiarism didn’t even enter my mind.”

She agrees, however, that the artist should have taken women’s sensibilities into consideration when presenting a work of public art. For a work intended for display in an academic institution, she adds, extra care should be taken to project a positive message.

“I’ve said a lot about the male perspective when it comes to the female nude. The male eye tends to objectify the female body.”

Still, she allows that we may be reading too much into Cacnio’s sculpture.

“The more important issue is the aesthetics,” she says.