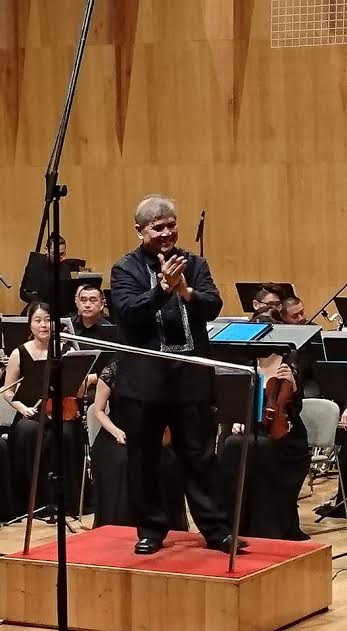 “The work tries to evoke the different feelings, emotions and needs of these children,” says the composer. There are the playful, nonsensical words of “Bagbagto” of the young Kankana-ys (Igorots) of the Cordilleras, the haunting lullaby “Ili-ili Tulog Anay” from the Visayas, the rhythmic “Sa Duyan” from the Tausogs in Mindanao, and the energetic “Tong Tong Tong Pakitong Kitong” from the Tagalog regions.

“The dialogue between the soloist and orchestra tries to capture the spirit of all these songs,” Toledo said.

With soprano Bianca Lopez and the IllumiArt Philharmonic Orchestra under the baton of Tomomi Nishimoto, “Hoy! Bata…” had its premier at a recent concert in Tokyo before a full house. The venue was the 2,000-capacity Tokyu Bunkamura Orchard Hall, where the Filipino composer was a special guest.

The other works performed were by Gustav Holst and by Pang Ving-taradon of Thailand. The theme of the concert was “Weaving Asia into Music.”

A few days earlier, Toledo had participated in the opening symphonic orchestra concert of the 2017 China-Asean Music Festival in Nanning City, Guangxi Province, this time as guest conductor of the Guangxi Symphony Orchestra.

Featured compositions were “Concertino Variations” by National Artist Ramon B. Santos, which also had its premier, plus works by composers from China, Hungary, Poland and the United States. The soloists were from China.

“It was a fun experience despite the language barrier,” Toledo said. “Only the trumpet player spoke English.

Music is international, we understood one another through gestures. In Japan no problem. I just needed to talk to the

conductor.” The concert was organized by the Japan Foundation Asia Center in cooperation with Tokyo Bunkamura and Tokyo TV Corporation.