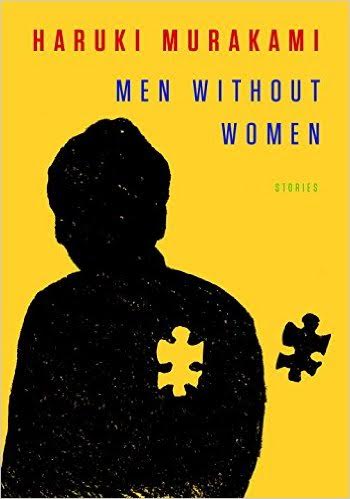 On the bright yellow cover of Haruki Murakami’s new collection, “Men Without Women: Stories” (translated from the Japanese by Philip Gabriel and Ted Goossen, Alfred A. Knopf, New York, 2017, 228 pages), there is the dark silhouette of a man with a jigsaw-puzzle piece missing from where his heart should be. That’s exactly where “Men Without Women” is situated: A place where everybody ponders something they’ve lost or has left them.

This reflection on abandonment is the latest from the Japanese writer, whose last book was 2014’s “Colorless Tsukuru Tazaki and his Years of Pilgrimage.” Murakami, author of international bestsellers such as 1997’s “The Wind-Up Bird Chronicle” and 2011’s “1Q84,” has sold millions of books and been translated into over 50 languages.

“Men Without Women” features seven stories, including three previously published ones. All of the stories are classic Murakami, impeccably written, highly atmospheric and just this side of odd.

Unlike what happens with this novels—where he gets to explain the heck out of the weird events unfolding—Murakami just lets the strangeness hang in the air at the end, making the stories even sadder, kind of like being injected with a smaller but more potent dose of Murakami medicine.

“Drive My Car” follows an actor named Kafuku who has hired a woman to drive for him, revealing to her that he had a friendship with a man who was sleeping with his wife: “If that’s what you wish to call it, then we men are all living with some kind of blind spot.”

The second story, “Yesterday,” is built around a friendship between two men Tanimura and Kitaru as much as it is about the incorrect lyrics to the song by The Beatles. Their relationship is built around conversation—the whole story is in fact one long conversation —that turns weird when Kitaru tries to convince Tanimura to go out with Kitaru’s girlfriend Erika.

“An Independent Organ” is narrated by a man named Tanimura (most likely the same man in the previous story) who watches what happens when an aloof, unaffected plastic surgeon named Dr. Tokai falls terribly in love. “Of course, there are many such people—we can call them blessed—who never encounter that light, or who see it but come away unfazed.” If you think you were madly in love, read this story.

“Scheherazade” recalls a man named Habara’s regular intercourse with a married woman who told him a story after they made love.

Easily the weirdest story in the collection is “Samsa in Love,” in which a man wakes up in a world after some kind of massive event and finds his family missing. He also takes an interest in a visiting hunchbacked repair-woman. It’s Murakami’s eerie shout out to a major influence, Franz Kafka, with the name “Samsa” coming from the main character in Kafka’s “The Metamorphosis.”

The most disturbing story in the collection is “Kino,” in which a man named Kino, brokenhearted by his wife’s infidelity, opens a bar named after himself and is visited by different kinds of unexplainable happenings. A woman shows him the scars of her lovemaking. A cat appears and then disappears. A regular customer, who may not be what he seems, asks Kino to do something surprising. Should Kino acquiesce? Is there something beyond the pale that is causing all of this?

The best story in “Men Without Women” is the titular tale. A nameless narrator is woken up in the middle of the night by a phone call. On the other end is another nameless man who says that his wife—a woman the narrator once dated—has killed herself. The narrator notes this is the third woman he has dated who had done so. The rest of “Men Without Women” is his poetic pondering of the relationship and the phone call. “It’s quite easy to become Men Without Women. You love a woman deeply, and then she goes off somewhere. That’s all it takes. Most of the time (as I’m sure you’re well aware) it’s crafty sailors who take them away,” he muses. “The suggestive shadow of sailors, the sound of foreign tongues they speak (is it Greek? Estonian? Tagalog?) leaves you anxious.”

Yes, all of the seven tales in “Men Without Women” feature male protagonists who fit the title. Each one, to varying degrees, deploys the weird wonder that Murakami is best known for, leaving you cautious and curious at the same time. “For Men Without Women,” Haruki Murakami writes, “the world is a vast, poignant mix, very much the far side of the moon.