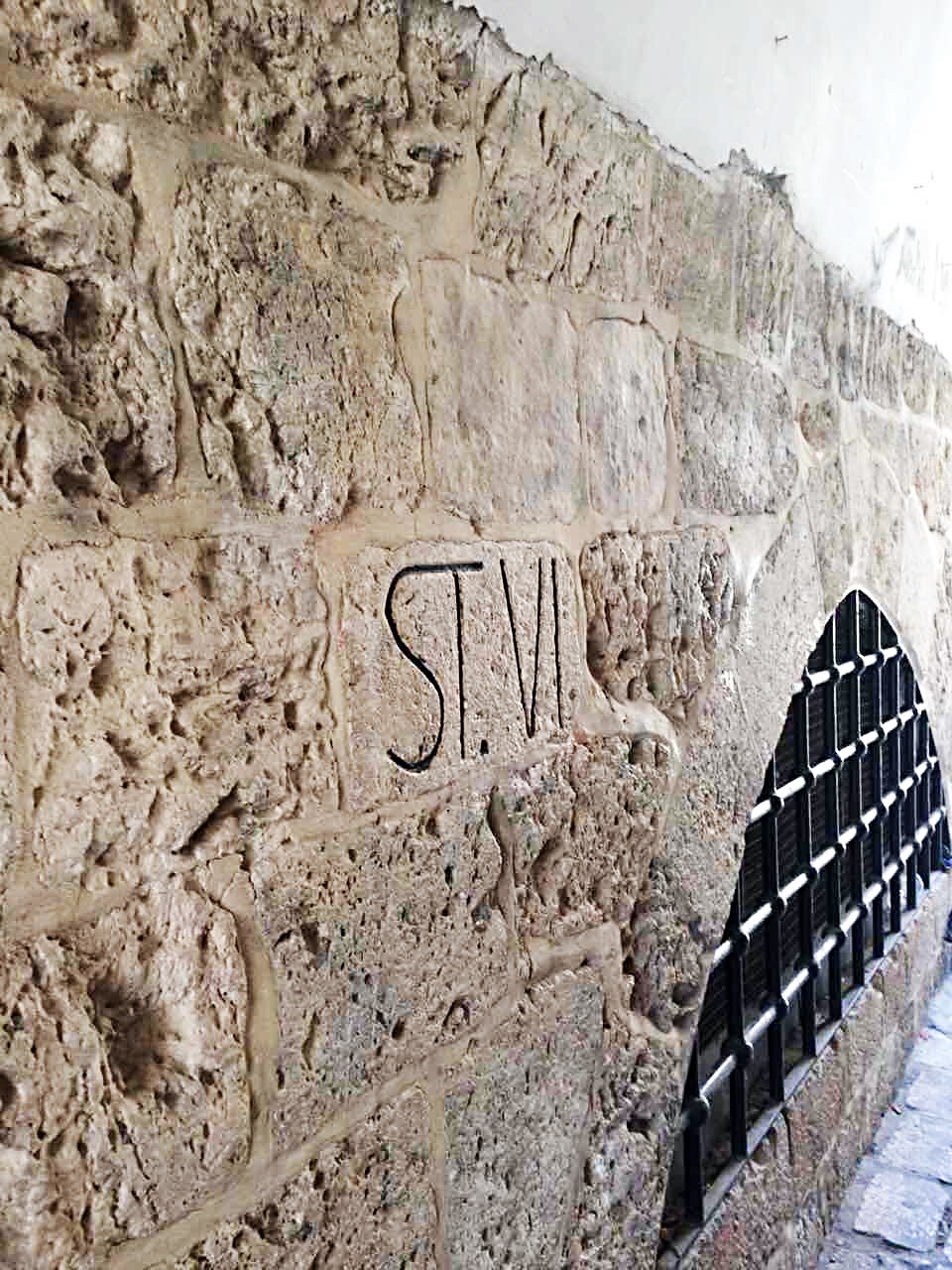 Sixth station of Via Dolorosa: “Veronica” wipes the face of Jesus, and his face gets imprinted on the linen cloth.

Via Dolorosa in Jerusalem on Ramadan: Beauty shop across ‘Veronica’ station!

Because we made the entry to Jerusalem from St. Stephen’s Gate rather than Damascus or Jaffa Gates that are the favorites of tourists and pilgrims, we were left to make free and figurative connections between Via Dolorosa and Mount of Olives.

Mount of Olives, of course, was any pilgrim’s entry to Old Jerusalem in biblical times.

Bethphage was the village on that mountain to where Christ sent his apostles to fetch a donkey for his triumphant entry into Jerusalem (Mark 11:2). And today’s Franciscan shrine in Bethphage is where the traditional Palm Sunday procession of the Catholics starts.

When the procession reaches the western slopes of the Mount of Olives, the procession will surely pass the Church of the Pater Noster and the Dominus Flevit.

When it crosses the Kidron Valley, devotees and penitents will surely relive Christ’s Maundy Thursday agony in the gardens of Gethesamane and look with tender sympathy at the Basilica of the Agony, which was built where Jesus prayed that the cup be taken away from him but only if it was God’s will and where he was betrayed by Judas Iscariot.

Basilica of the Agony

Gethsamane’s name came from the olive press that was used to process the olives and extract the oil (the Hebrew “gat shemanim” means “oil press”). We entered the compound leading to the Basilica of the Agony, which tends in its gardens the olive trees under which Christ prayed in agony on the eve of his passion.

A courtyard fenced in the olive trees which was at the side of the church. Our Jewish tour guide Mendy Gonda instructed us to check the front entrance so that we could better appreciate the architecture, especially its facade where graced the familiar mosaic by Italian professor Giulio Bargellini depicting the Gethsamane episode.

The mosaic was above the four pillars of Franciscan friar-architect Antonio Barlucci, where sat sculptures of each of the four evangelists with key passages from their respective accounts of the garden incident.

As in the Church of the Beatitudes, also a Catholic site under the custodianship of the Franciscans, devotees and pilgrims in the Agony church were constantly reminded by the brown friars to observe silence.

Inside the basilica, huge throngs of people milled about in semi-darkness as Barlucci had done away with the clerestory, a traditional lighting device in ecclesiastical architecture.

Adding to the deep sense of pallor were the alabaster panels dyed in purple that engulfed the interiors in the the somber, austere color of Lent and penitence.

In the apse of the basilica was the mosaic by Aquiles d’Achiardi depicting Jesus reclining on the rock of agony and around him the slumbering apostles. On one side of the altar was another mosaic by Mario Barberis depicting the “Kiss of Judas.”

Church of All Nations

Depending on one’s point of view, it may or may not be deplorable that nowadays the Agony basilica is more popularly called the Church of All Nations, since its construction in the 1920s was made possible by donations from several nations.

The new name hardly identifies the church as a “holy site” associated with Christ’s agony.

But then again, the site is truly multinational, and by the contributions of different nations for its preservation and its memorial, all sinners of the world are represented there.

Spanish Dominican Fr. Pedro Tejero Gonzalez, late professor at the Ecclesiastical Faculties of   University of Santo Tomas, in his “A Journey Through Gospel Lands (Life Today Publications, 1989), probably the only Holy Land guidebook published in the Philippines, writes about the nocturnal Holy Hour liturgy of the Franciscans every Holy Thursday in which Gospel passages of the Agony are read:

“Pilgrims from all over the world, united in one faith, one Lord and one baptism, have come to be with Jesus at the time when he underwent the most distressful hour of his passion, choosing to suffer and die on the cross, taking upon himself the sins of mankind.”

The Agony basilica is the Church of All Nations—and All Sinners—indeed.

Having traced Christ’s prayerful agony in the Mount of Olives, we entered Jerusalem via St. Stephen’s Gate and started the Via Dolorosa.

In his Oxford Holy Land guidebook, Father Murphy O’Connor, OP, was forthright and even blunt: “The Via Dolorosa is defined by faith, not by history.”

It’s true that Byzantine pilgrims on Holy Thursday used to go in a procession from the Eleona church (the Domus Flevit) in the Mount of Olives to Calvary, entering St. Stephen’s Gate and following somewhat the present route, “but there were no devotional stops along the way,” he wrote. By the 8th century, there were a number of stops but the route was different.

In the Middle Ages, according to Murphy-O’Connor, there were two rival groups of Christians that organized two different routes!

In the 14th century, the Franciscans organized devotional processions that even went out of St. Stephen’s Gate although the most popular stops, of course, were between the House of Pilate and the Holy Sepulchre since they were the most associated with the final hours of Christ.

On the other hand, religious groups in Jerusalem started a similar devotion but with only eight stations.

In the 15th century, international pilgrims who went back to their own countries also organized a similar devotion but improved on it by interpreting passages in the Gospels, so that they came up with 14 stations.

The Dominican biblical scholar declared the 14-stop Way of the Cross was a “European tradition.” “Since pilgrims expected to find in Jerusalem what they were accustomed to elsewhere, the European tradition prevailed.”

Which is not to say that Christ did not really go the way of the Via Dolorosa and everything was a but a sad but beautiful fiction.

Murphy-O’Connor said Christ’s Way of the Cross was true, but it could not have started at the Antonia Fortress where today’s Via Dolorosa usually begins, but most probably from near the Jaffa Gate where there stood once a platform before Herod’s Palace. Since Pilate used to stay there when he was away from Caesaria, it was probably there where he washed his hands off any responsibility for Christ’s execution.

Moreover the actual Via Dolorosa would have been even more horrendous, the Dominican scholar pointed out, as Christ would have been led to very narrow passages where bystanders could have freely struck his face, kidney and even genitals.

Perhaps the stark details of what really happened should buttress the “truth” of the Via Dolorosa. The devotional across the centuries has acquired the truth of history: the Latin “devotionem” is a noun of action, as in making a pledge, consecrating a vow or performing a sacrifice.

When devout pilgrims and sincere penitents unite themselves with the Passion and Crucifixion of Christ, truth is established, nay consecrated, even if certain details of history are elided.

The first two stations (Jesus is condemned and Jesus carries his cross) are located near the Church of Flaggelation of the Franciscans in the Ecce Homo arch.

The third station (Jesus falls the first time) is located at the corner of Tell-Wad Street where now stands a chapel that was restored by Polish Catholics in 1948.

he pressed himself up from the fall. Pilgrims nowadays reverentially place their hands on the declivity.

The fourth station (Jesus meets his Mother) stands in front of an Armenian Catholic church over the gate of which is a striking lunette with the relief of Christ meeting Mary.

The fifth station is where the uphill trek toward Calvary starts and the street is called “Street of Dolors.” In this station, Simon the Cyrenean from Libya was asked to carry the cross in place of the severely weakened Christ.

The sixth station is about 80 paces away, the traditional site of the house of Veronica, who was said to have come forward with wet linen to wipe the face of Christ and whose charity was rewarded when his suffering visage was imprinted on the cloth that she thereon kept as a holy relic.

The story is not in the New Testament and is clearly apocryphal although it is not exactly untrue and even unhistorical.

As the saga of the rediscovery of the famous Veil of Manoppello in a Franciscan church in the Abruzzi region of Italy only in the last 20 years shows, the Veronican tradition arose out of the disappearance of the veil of the Resurrected Christ from the Vatican during the Sack of Rome in 1527.

As a compensation for the loss of the sublime relic, the devotional imagination crafted the beautiful story of “Veronica,” which is really a portmanteau of the words “vera” (truth) and “ikon” (image).

“Veronica” therefore is “the true image” of Christ. Hence, an apocryphal story or a myth is not necessarily untrue. It could even be more true than reality in the context of Aristotle’s famous pitting of poetry versus history: “Poetry is something more philosophic and of graver import than history.”

Ironically across the sixth station was a women’s shop called NHB (which stood for “Nutrition, Health, Beauty”). Its very bright display window showed female models in various stages of dishabille to show off the curves and fruits of their intense dieting, fitness regimen and zealous skincare. Because these models were obviously scrimping on the fabric to show off their bods, none would have any clothe to spare to wipe off any dusty pilgrim’s face, much less the dolorous Christ’s.