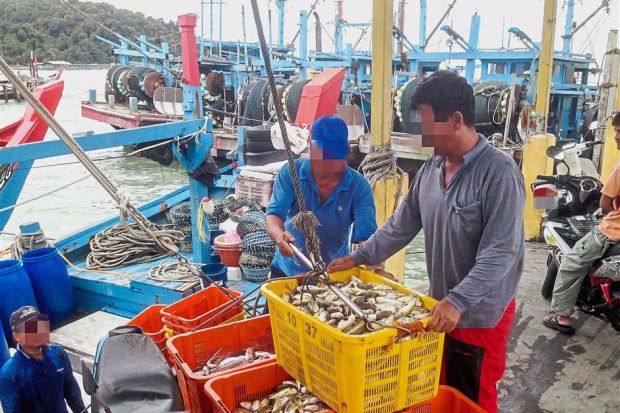 Dangerous catch: Workers unloading baskets of pufferfish at Teluk Bahang jetty. The fish is later sold widely under the guise of ‘crystal fish’ in the wet markets of Penang, Kedah and Perak. THE STAR ONLINE/ASIA NEWS NETWORK

Pufferfish: a meal deadlier than cyanide

PETALING JAYA, Malaysia – In the old days, when fishermen caught pufferfish, chances are they would be thrown back into the sea.

After all, pufferfish, from the order Tetraodontiformes, are known to be poisonous to humans as they contain tetrodotoxin, a substance toxic enough to kill a person in a few hours when ingested in amounts of as little as 25mg.

In addition to this, there is no known antidote to this toxin, which is considered even deadlier to humans than cyanide.

Those days are gone, as some enterprising fishermen have deci­ded that filleted pufferfish can be sold to the unwary.

Filleted pufferfish is now being sold widely in wet markets of Penang, Kedah and Perak from RM18 to RM20 (P200 to P235) per kg, under the guise of “crystal fish.”

Eateries are also buying crystal fish, as its white-colored flesh makes it an acceptable substitute to costlier species at a substantially lower price.

This is not to say that the pufferfish is completely inedible. The trick is knowing where the poisonous parts are – typically the liver, eyes, eggs, blood and skin – and skillfully removing them without contaminating the rest of the fish with toxin.

Pufferfish, known as fugu in Japan, is considered a delicacy but its sale in markets and restaurants there is highly regulated.

In Japan, chefs are required to undergo two to three years of internship before they are qualified to serve the dish, usually in the form of sashimi (raw) or chirinabae (hot pot with vegetables).

However, the chef has to display his license before he can ply his trade. But nothing of this sort takes place in the fish markets here.

A source told The Star that foreign laborers with little experience in gutting the fish were employed to slice the pufferfish, known locally as buntal pisang.

“These laborers were told to just slice the tail portion of the pufferfish, below its abdomen, missing out the stomach. Gutting activities are carried out in makeshift huts and backyard operations near the ports where these fish were unloaded,” he said.

“It is a booming business in the northern states as there is a big demand for such fillets by unsuspecting buyers,” said the source.

A Fisheries Department official said there is currently no law to prevent anyone from selling pufferfish.

“Pufferfish is considered ‘trash fish’ (no commercial value) by the department. It has never been fished commercially nor has its meat been sold in the market,” said the official, who added that in the past, pufferfish would just be thrown back into the sea when caught.

He agreed that it would be unethical and downright irresponsible to sell the fish to consumers here on account of the risks involved in eating them.

The risk to consumers here comes not from the fish itself but on how it is prepared for consumption, said fisheries expert Dr Mohd Azmi Ambak.

He said that a slip while gutting the fish could rupture the toxic internal organs and taint the fillet.

Tetrodotoxin is not to be trifled with as it is colourless, tasteless, odourless and cannot be destroyed by cooking in high heat.

“The fish itself does not produce the poison. The poison is produced by bacteria living inside the fish in a symbiotic relationship,” said the senior professor who lectures at Universiti Malaysia Terengganu’s Faculty of Fisheries and Aqua-Industry.

“There is a huge risk involved when consuming it, considering the poison it carries,” he said.

According to Universiti Malaysia Sarawak’s (Unimas) Assoc Prof Dr Samsur Mohamad, symptoms can be seen within minutes after consuming the poison.

“For the majority of cases, symptoms such as numbness in the mouth, lips and tongue occur within 30 minutes to three hours from in­­take and after that, the victim be­­gins to experience headaches, nausea and even vomiting,” said Dr Samsur.

The rest of the body slowly becomes paralyzed, causing death when the heart and lung muscles are also paralyzed. However, the victim’s brain is not affected, and is aware of what’s happening.

There are 32 species of pufferfish in the country, with the Sarawak yellow puffer being the most consumed by locals.

According to papers authored by researchers from Unimas’ Faculty of Resources Science and Techno­logy, the Sarawak yellow puffer is the least toxic among local species.

However, despite the low toxicity level, there are still reports of people getting mild neurotoxin poiso­ning after eating the fish.