LOOK: Inspiring seniors in their 80s, 90s prove no one is too old for basketball | Inquirer Lifestyle ❮ ❯ 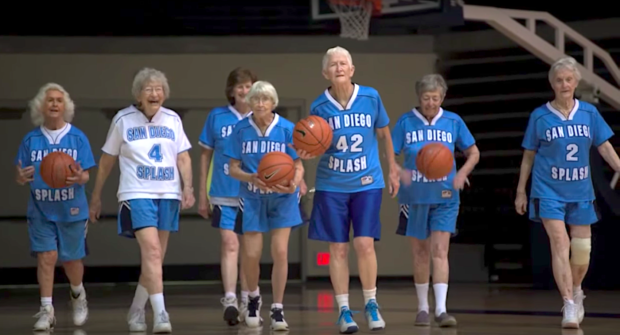 When Grace Larsen was younger, only a limited number of women played sports in the United States.

After Title IX, an anti-discriminatory law in education was passed in 1972, more girls were able to join varsity athletics and professional sports.

Now 91, Larsen is making up for lost time along with her teammates. She was 78 when she got her first pair of basketball shoes.

Meg Skinner, 91 and a retired physical education teacher, founded the San Diego Splash over 20 years ago. The Splash plays in the San Diego Senior Women’s Basketball Association, a league for women 50 years and above.

The only qualifications to joining the team are being over 80, and this important skill, “If you can stand up and move your legs, you’re welcome,” says Carl in an ESPNW report.

The team is the oldest in the league, but they still manage to play 30-minute three-on-three games.

Friends and family members warned them that playing the sport could cause injuries, or that they wouldn’t stay long in the team. But the sport may even be the source of their long lives: Carl says she has outlived all her friends.

“You gotta keep moving because ‘rest in peace’ is a long time,” advises Carl in a Fox 5 Sports interview.

While they don’t usually win their games—their competitors are normally 20 to 30 years younger—they haven’t lost their drive.

“Togetherness is one of the big things. We’re a sisterhood,” says Skinner.

And this is one of their most inspiring messages: “You only have one life. What the hell.” Niña V. Guno/JB

How basketball can make you a better person