The witches stole the show in this ‘Macbeth’ mashup | Inquirer Lifestyle ❮ ❯ 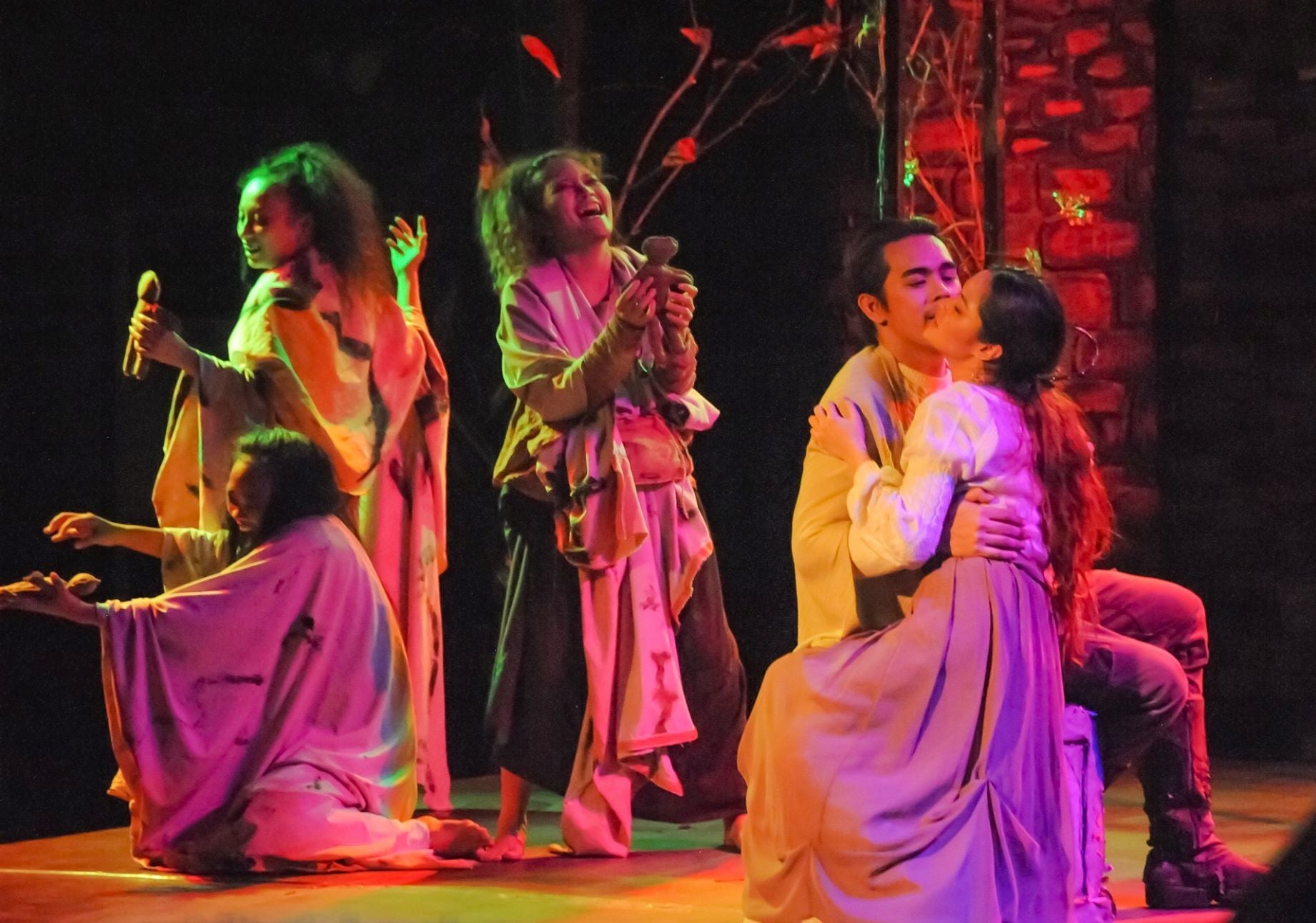 The witches stole the show in this ‘Macbeth’ mashup

The “M” in Artist Playground’s “M Episode” stands for Macbeth, titular character of William Shakespeare’s bloody treatise on naked ambition and greed and the violent lengths it can drive a man to.

In this particular playbill, Macbeth appeared in two back-to-back productions: the aforementioned classic; and James Chalmers’ “Prelude to Macbeth”—a prequel that provided a backstory to the character triad of Duncan, Macbeth and Lady Macbeth.

In both instances, it wasn’t the protagonist (Paul Jake Paule) or his grasping wife (Jernice Matunan) who stood out, but the witches—performed alternately by Tasha Guerrero, Princess Tuason, Jeremy Cabansag, Kia del Rosario, Marjorie Duldulao and Alvin Espiritu.

With no histrionics, no overacting, and without evolving into “characters” in their own right, these malefactors of black magic basically stole the show, transforming with every scene into a powerful undercurrent of evil that seethed, hummed, needled and sometimes exploded into mayhem as the main characters hurtled into their narrative of tragedy.

Director Roeder Camañag made the bleak atmosphere and the tight venue (the penthouse of a building on West Avenue repurposed into a black box theater) work to build up the inevitable madness that would come later. But the effectiveness of this approach had the effect of showing Act 1, “Prelude to Macbeth,” as far less compelling, even redundant.

The prequel posited a contemporary interpretation of how the lives of Macbeth, Lady Macbeth and King Duncan (Andre Tiangco) got entangled with each other in their youth. This shared history painted a surprise dark side to Duncan, while the manipulated Macbeth and his future wife were shown in a more sympathetic light.

But all these supposed twists would be rendered meaningless when “Macbeth” properly roared into view. Shakespeare’s material virtually ensured that Chalmers’ take on the characters would come off as a lightweight superfluity.

Camañag tried to create a link between the two plays by having the young Lady Macbeth in the “Prelude” appear as a memory in the main production. But it hardly made the kind of impression that would allow the prequel to dislodge the towering story of bloodbath now happening on stage.

Tiangco attempted valiantly to create two sides of the same character in the two productions but that effort was lost in the inadequacy of Chalmers’ reinvention. Time and again, the original text spoke of Duncan’s innate good heart and his trusting nature—but the prequel appeared to say otherwise.

So, the more faithful Tiangco acted in accordance with both material, the more he betrayed their inconsistency with each other.

Paule’s Macbeth, unfortunately, seemed all rage and envy, and not much more. The scenes that required him to seethe and lash out made their mark, but the character’s vulnerable side—his sense of regret, anxiety, dread and guilt—was left mostly unexplored as this younger-than-usual Macbeth bellowed his way through moments that required more nuance and introspection.

Aside from Tiangco, Al Gatmaitan as Macduff was perhaps the only other actor who showed creditable range. His shifts from wary feudal lord to neglectful husband and vengeful soldier were realistic and his motives clear and his character human and relatable.

While this hybrid attempt at Shakespeare felt more tentative than assured, still, it is to the credit of Artist Playground’s practitioners that they are willingly challenging themselves to take on bigger material (all the company’s productions before this “Macbeth” twin bill had been compact one-act plays). It is, evidently, a learning curve they are tackling head-on, with guns and hearts blazing, so kudos for that.