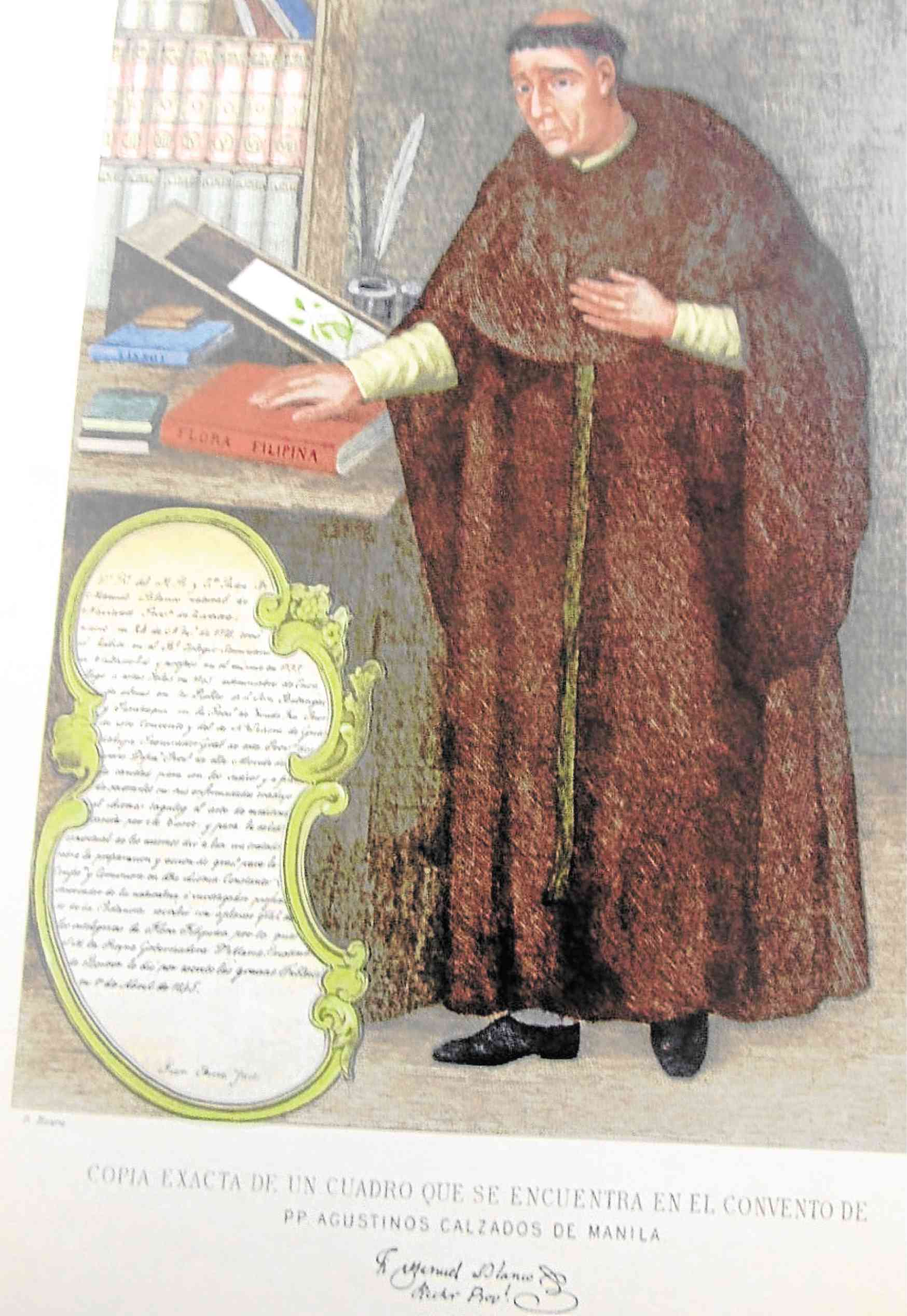 Exact copy of Blanco’s portrait, found in an Augustinian monastery in Spain

The image of the Spanish friar in colonial times, depending on the century and on the judge, has been either revered or hated. Jose Rizal caricatured some of the friars in his novels, but he was also careful to show examples of priests who were devoted to their flocks.

One such nonfictitious friar was Fr. Manuel Blanco, a member of the Augustinian order, who lived from 1779 to 1845.

A native of Navianos, Zamora in Spain, he found his calling early, professing as an Augustinian at age 16 and departing for the Philippines as a missionary in 1804. He was assigned to Angat, Bulacan, where he mastered Tagalog and found his early love of Philippine flora.

His motivation was to discover natural remedies for his parishioners.

In 1812, he was promoted as pastor of San Jose, Batangas, whose church building he erected. Successively, he was assigned to Bauan, Batangas, and Parañaque.

He largely taught himself in the botanical sciences, including the Swede Carl Linnaeus, who systematized the identification and naming of plants.

Parallel to this was Blanco’s study of Philippine flora. He was following in the footsteps of the Jesuit Czech Brother Georg Joseph Kamel (1660-1706), pharmacist and naturalist based in Manila, after whom the camellia flower was named by Linnaeus himself.

Far away from the metropolis, these researcher priests were largely on their own and were like barefoot doctors consulting with local herbolario in order to learn their skills and crafts. The available medicine from either Spain or Mexico arrived in the galleons and were affordable only to the elite.

The first edition of “Flora de Filipinas” was printed in 1837 by Imprenta de Santo Tomas and consisted of 887 pages with descriptions of 903 species and varieties of plants in Latin, with 31 in native names.

Four editions followed in the next centuries. The last edition, a collector’s item by now, was produced in 1993 under Fr. Pedro G. Galende, OSA, director of the San Agustin Convent.

The fifth edition was published in 2017 by Vibal Foundation, Inc. in Quezon City, with the support of Consejo Superior de Investigaciones Cientificas (CSIC) and Real Jardin Botanico in Madrid.

It is by now also a collaborative work of Filipinos, being edited by Dr. Domingo A. Madulid and with the support and cooperation of the Augustinians of Intramuros, as represented by its director, Fr. Ricky Villar, OSA, as well as publisher Gaspar Vibal.

There had also been Filipino painters and illustrators who had worked on the images, such as Lorenzo Guerrero, Felix Martinez and Felix Resurreccion Hidalgo.

If the previous editions separated the botanical descriptions from the illustrations, this edition has united them on interfacing pages and with added commentary from local scholars like Dr. Damiana Eugenio, or data gathered from 20th-century savants, such as Eduardo Quisumbing (creator of Quink ink, patented later by an American company) and Elmer D. Merrill. It also makes generous use of local names, folklore and knowledge.

This is just the first volume of what is said to be a series. It covers just 150 of the over 1,000 species in the third edition.

The Philippine capital, Manila or Maynila(d), is named after the tree nilad (Ixora Manila) that used to grow in mangrove swamps around Manila and Luzon. Today, it is reported in the fifth edition that “patches of this hardy mangrove plant can still be found growing along two kilometers of Freedom Island, at the border of Las Piñas and Parañaque off the Manila-Cavite Expressway.”

We know such species by their names, but through pictures we are now able to visualize or identify them and learn their practical uses.

The selection covers such familiar plants as sampaguita, tsampaka, tsiko, sinigwelas, singkamas, santol, sampalok, saging and makahiya (one of Father Blanco’s favorite plants). However, the majority of us may know these only as goods sold in groceries and markets and not know how they look in the wild or with their foliage, as depicted by master artists in the book.

We are also introduced to exotic species such as putukan, pingka-pingkahan and patolang-uwak and those with naughty native names, such as pukinggan, whose flower has strong semblance to the female member, or bayag-usa for fruits that resemble deer testicles.

Tungkod-pari is actually a sacred plant for the Ifugaos and used in their rituals.

Strangely enough, the Hawaiians and other Polynesians also consider it sacred and offer it to their deities. Our own tuba plant has enriched Mexican culture.

Certain anecdotes are interesting in our social history, such as the fact that in 1642, Philippine governor general Sebastian Corcuera ordered the compulsory planting of coconut trees for the nourishment of soldiers and natives.

It is incredible to note, given how widespread it is now, that around 1800, the banana tree was not known in Manila and flourished only in Pampanga.

“Flora de Filipinas” opens our eyes not only to the perseverance and sheer doggedness of one Augustinian in the 18th and 19th centuries, whose legacy speaks to us even in the 21st century.