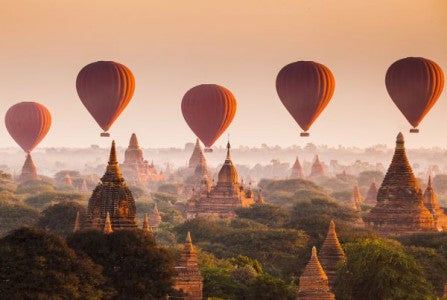 Tourists bound for Myanmar who were counting on taking the signature photo of hot air balloons floating above ancient Burmese pagodas will be disappointed to learn that climbing the temples of Bagan is soon to be phased out.

So be prepared to say goodbye, likely for good, to the iconic Instagram photos seen round the world: hot air balloons silhouetted against a fiery, orange sky, with ancient pagodas lining the horizon.

A new order from the country’s ministry of culture is set to ban tourists from climbing the temples in the ancient Burmese city, in order to preserve the monuments and help it in its bid to become a UNESCO World Heritage Site by 2019, reports The Independent.

It’s not the first time officials have tried to bar tourists from scaling the ancient monuments.
Last year, the government announced a similar initiative but backpedaled following a loud outcry from tour operators.

The latest attempt to impose a blanket ban also follows a devastating earthquake which damaged more than 400 buildings in Bagan last summer.

The most popular sunset-viewing temple in Bagan is the Shwesandaw pagoda. JB

Myanmar a year after the historic election