Come to Honolulu for the beaches, stay for the shopping | Inquirer Lifestyle ❮ ❯ 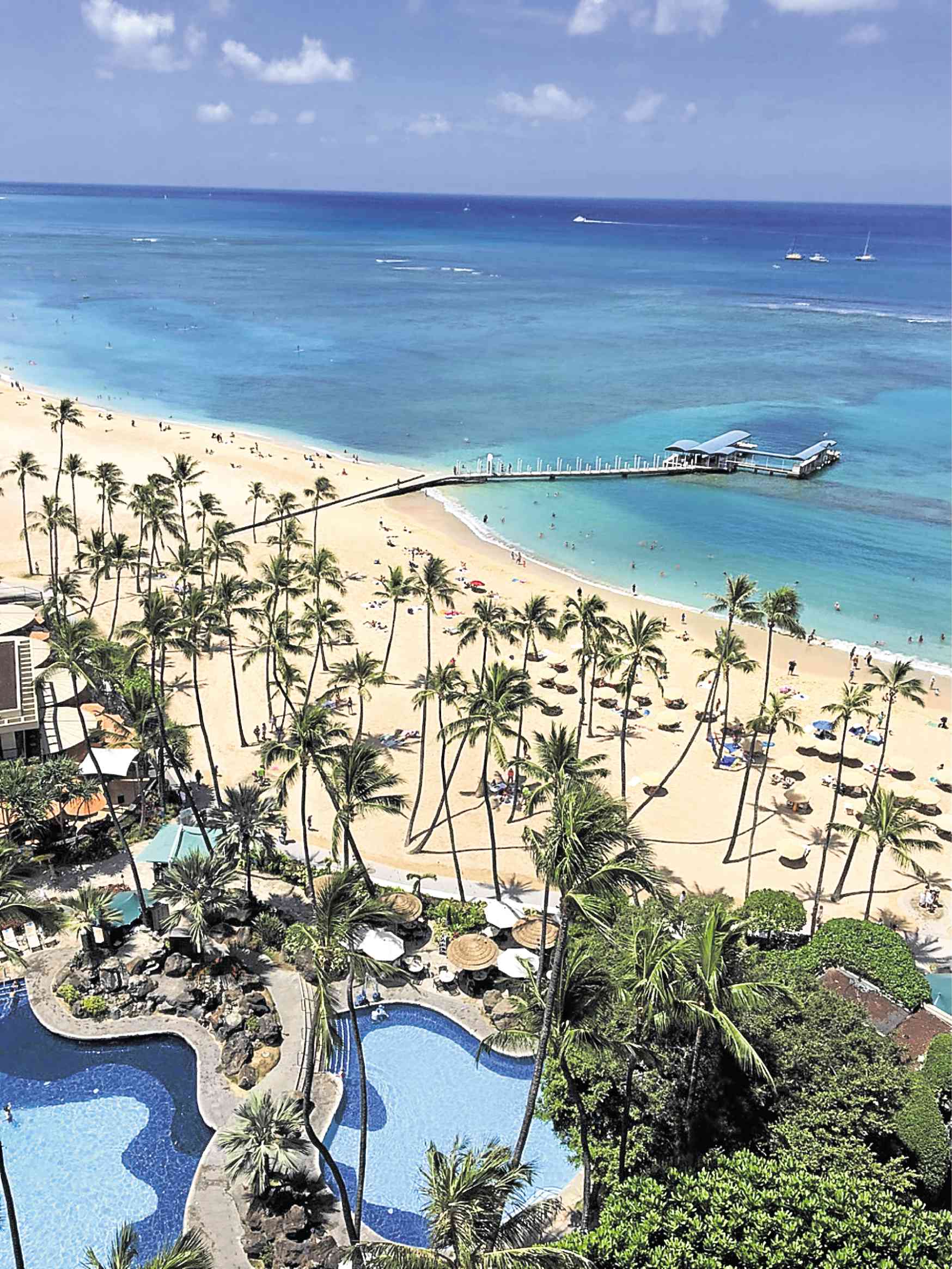 View of Waikiki beach from my room in Hilton Hawaiian Village

Come to Honolulu for the beaches, stay for the shopping

The Hawaii of our imagination—fed by movies like “50 First Dates,” “Blue Crush,” “Forgetting Sarah Marshall”—looks a lot like the Hawaii of my vacation. Pristine beaches, crystalline waters, good-looking people with a kind word for tourists, and beautiful plants—everywhere you look, it’s a tropical paradise.

My last trip to Honolulu was in the early ’90s. I was around nine, and thanks to old family photos, I found photographic records of me smiling in Ala Moana, the alfresco mall, as well as next to historic sites like Pearl Harbor and, um, Marcos’ dead body. (Yeah, Ferdinand’s corpse. Don’t ask me why.)

With more than a decade between this visit and my last, I found Honolulu surprisingly unchanged—its scenery just as beautiful, its food just as tasty (still a lot of Spam and fried rice).

Yet there’s so much to discover that wasn’t open to me as a kid—like eating so much poke my stomach hurt (my parents aren’t into raw food), or trekking well-known sites where “Lost” and “Jurassic Park” were shot.

Don’t get me wrong, Hawaii is famously family-friendly. There are enough things to do here to satisfy the pickiest of travelers.

Here, a list of things to do in Honolulu:

1) Drive to the North Shore, eat some shrimp.

The North Shore is home to seriously stunning views. Trek up the nearby mountains (or drive—most locals drive) to take in the beautiful vistas. Find time to dine at Giovanni’s or Romy’s—food truck institutions in the North Shore famed for their butter garlic shrimp served with rice.

The Honu, according to locals, does not boast a green shell. Its name, otherwise known as the green sea turtle, is traced to a plant-rich diet that lends its fat a greenish tint.

Protected by international laws, the sea turtles are integral to Hawaiian island identity. Though nearly decimated in the ’60s, they’re thriving again, thanks to strict regulations. They often populate the beaches in the morning, according to a local at the North Shore, and tourists are invited to admire from afar so as not to disturb or adversely affect these precious sea creatures.

A key attraction is the Iolani Palace, the only palace on American territory. Home to Hawaii’s past monarchs, it is a modest two-story building, designed in an American Renaissance style.

See the room where Hawaii’s last monarch was isolated and the bedrooms of the king and queen. In the basement, there’s a repository of jewels worn by the royal family.

At the Bishop Museum, you’ll find royal collections owned by the Kamehameha family. And in Queen Emma Summer Palace, the family’s summer retreat, get a peek on how they lived, with plenty of the home’s original antiques and furnishings remaining.

4) Go shopping during sale season because the deals are intense.

Ala Moana Center was, much like in the late ’80s, airy and outdoorsy. But this expanded version boasts a huge range of shops, from department stores like Nieman Marcus, Bloomingdale’s and Sak’s to designer shops like Valentino, Balenciaga, Celine, Chanel, Brunello Cucinelli. I made my way during sale season and scored major deals, like a pair of Isabel Marant sandals, originally retailing for almost $1,000 that I got for a fraction of that. (Like less than a quarter fraction! My math isn’t good but even I know that’s a great deal.)

The Premium Outlet center, featuring shops like Barney’s, Sak’s, Tumi, Armani Exchange, is more on the outskirts of town but also offers great bargains. I found some items at 90-percent off. Once again, sale season is a blessing from God.

I know it sounds cheesy, but trust me, it’s fun. Kualoa Ranch (www.kualoa.com), protected by the National Register of Historic Places, is a famous nature reserve, bordered by both mountain and sea.

“Jurassic Park,” “Lost,” “Godzilla,” “Hawaii Five-O” were all filmed on the 4,000-acre development. On my visit, Chris Pratt and company were filming the upcoming “Jurassic Park” sequel on the island, and some trailers were on site at Kualoa for key scenes.

The best way to experience the island and the tour is either via horseback or ATV. Trek through the valley and stand next to Godzilla’s footprint, or simply brush against the site’s rich, tropical flora and fauna.

It’s 10 hours from Manila to Honolulu, and one of the reasons I enjoyed my four-day trip so much was largely due to the plane. I slept like a baby on PAL’s recently upgraded Airbus A330. The reconfigured business class cabin boasts fully reclining seats that go all the way to flatbed mode. An adjustable air cushion system offers plenty of comfort with a massage function. More than 50 percent of the seats are singles so there’s privacy.

Spend the flight vegging out on movies (there’s a brand-new entertainment system accompanying the new large 10-inch touch-screen monitor), or do as I did and get some much-needed shuteye for the flight. My PAL flight left Manila mid-afternoon and I arrived in Hawaii in the morning, so I went straight on a tour after landing to maximize my four-day trip.

Hawaii locals take great pride in their food. As they should—everything is tasty and friendly to the Filipino palette. Aside from a love of Spam, Hawaiian food boasts eerie similarities to ours: the kalua pig is similar to the lechon, except that it’s roasted underground. Squid luau is laing made sweeter, with pork swapped for squid.

At Highway Inn, established in 1947, the menu offers the full range of authentic native dishes, from poke to poi.

Another local institution is Helena’s Hawaiian Food, a super affordable hotspot that’s been serving all the classics—lomi salmon, pipikaula—since 1946. It has also won a James Beard award.

For lovers of sweets, the poi (made from sweet taro) glazed doughnuts at Kamehameha Bakery has a loyal following.