Ambeth Ocampo, on why Arturo Luz is the ‘cheapest’ National Artist | Inquirer Lifestyle 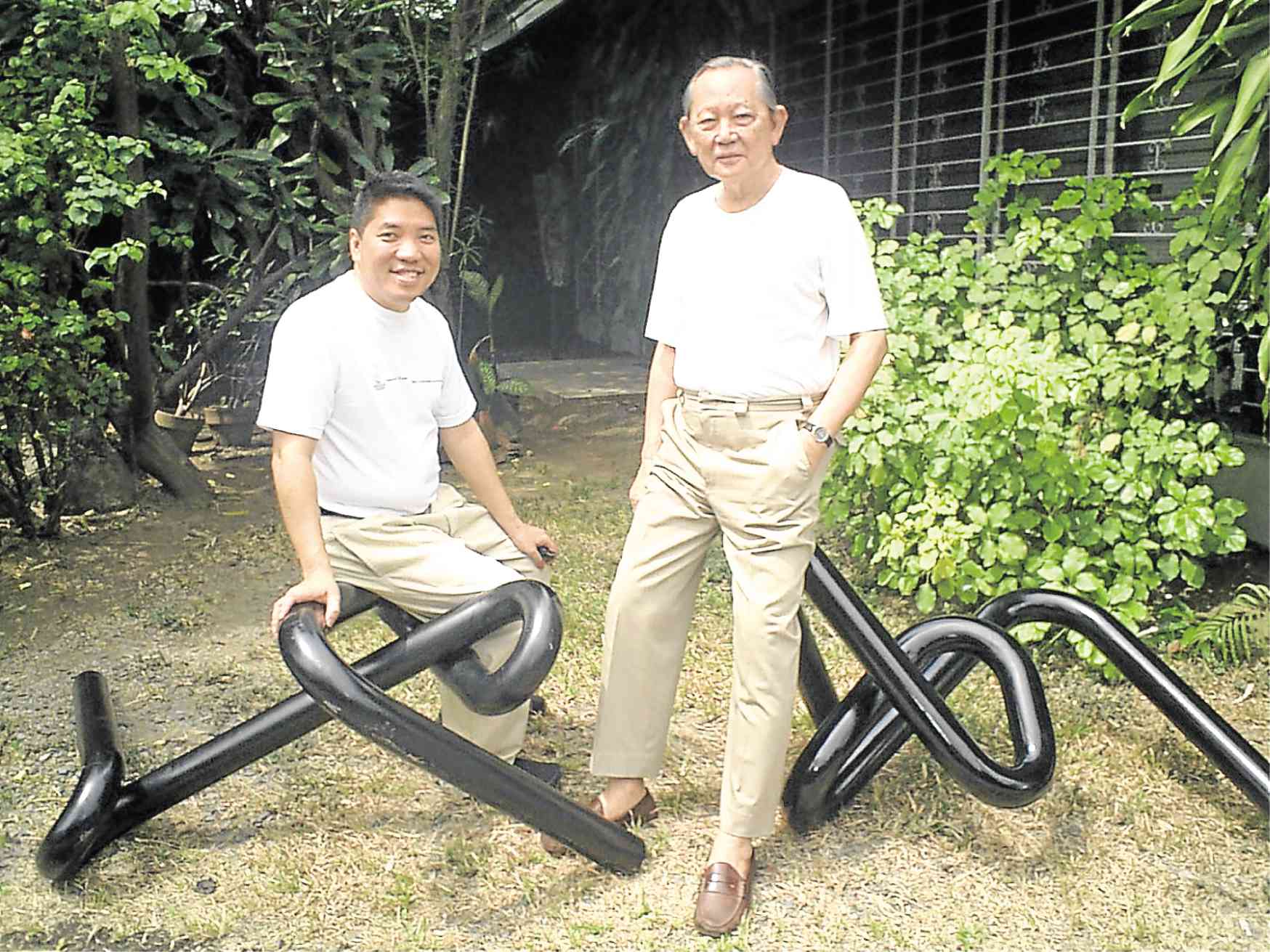 Ambeth Ocampo, on why Arturo Luz is the ‘cheapest’ National Artist

What happens when a historian meets a modernist?

One obsessed with what has gone before, the other reaching for what is yet to be realized: Can they find a common ground?

The answer may be found in “First Light,” historian Ambeth Ocampo’s painstakingly curated retrospective exhibit of the works of National Artist Arturo Luz, which runs until the end of July at Ayala Museum.

Or it may not.

In either case, it’s worth a look, if only to get acquainted with the work of this most enigmatic of the modern Filipino masters.

In the continuum of modern art in the Philippines, Luz stands alone.

Although his early work from the 1950s shows him mining the same populist vein as predecessors such as Manansala, Ocampo and Legaspi (scenes drawn from daily life in postwar Manila), Luz soon abandoned this for a more rigorous formalism that pared down what remained on the canvas to the barest essentials of line and color.

As Luz himself put it: “I was slowly beginning to realize that, for me, the subject was becoming less and less important, until, as a consequence, my paintings became simpler and simpler and I eventually wound up with a few objects, mostly still life. It wasn’t the subject as such that interested me, but the shapes, the linear structure.”

Over years and decades, Luz would keep coming back to the same subjects—still lifes, landscapes, cyclists and musicians—doing hundreds of variations, trying to exhaust all the possibilities. As his friend, the artist Fernando Zobel put it, he “had the patience of a spider.”

“My work is relatively simple; there’s nothing complicated about it,” Luz wrote. “It involves the same problems except that I keep changing the medium. My work is linear and geometric and that’s it, essentially.”

In many ways, Luz’s aesthetic goes against the grain of Filipino sensibility: “cool” where Filipino tastes run “hot,” concerned with ideas rather than feelings, intellectual rather than emotional.

Unlike many of his contemporaries, Luz’s work isn’t immediately engaging. To appreciate it, the viewer has to approach it in an almost contemplative frame of mind.

Which is probably why Luz leaves many viewers cold, at least at first.

“I didn’t like his work at all,” admits the avid art collector, who met Luz in 2002. “I went to see him because I wanted to buy one of his silver sculptures. Since I was there, his assistant showed me some of his other work. I started looking. It developed from there.”

Ocampo came home with a painting. He kept looking, and the artist and his art grew on him. Eventually, the two became friends. Ocampo now owns an enviable collection of Luz’s works, some of which may be seen in the Ayala Museum exhibit.

“He’s a very erudite, well-read person, and when you talk, he makes a lot of sense,” Ocampo says. “[Art critic Leo] Benesa called him ‘the painter with the mandarin sensibility.’ Luz’s sensibility runs against the grain of Pinoy horror vacui. Its strength lies in its balance and restraint. It’s too sparse, too intellectual for some, which is what scares many people off. It is cold—but it works.”

“People recognize him, but whether they accept him is another thing,” Ocampo says.

In 1979, after a 10-year hiatus in which he did mostly sculptures, Luz made 3,000 artworks in a 15-month creative spurt. From these, he selected 250 for a retrospective exhibit at the Museum of Philippine Art. Not a single one was sold.

“Luz is the cheapest National Artist,” adds Ocampo. “He’s underrated. Bencab and Ang Kiukok fetch millions, but I think most collectors still don’t understand the appeal of Luz. If he didn’t become a National Artist, he wouldn’t be selling at all.”

Ocampo hopes to redress this injustice with “First Light,” which he curated in honor of the artist’s 90th year. Gathering works from all stages of the artist’s career, in roughly chronological order, the exhibit allows viewers to see how Luz’s work has evolved over six decades.

As Ocampo writes in his curatorial notes:

“An arc can be traced from the genre, color and pictorial representation of Luz’s work in the 1950s to the muted colors and simplified lines and shapes of the 1960s. He abandoned painting for sculpture in 1969, and progressed into three decades of purely abstract works in sculpture, painting, collage and prints. Echoes of his early work can be discerned in works from the 1990s and early 2000s. The return is in a different form, not mere repetition, but the attempt of the artist to explore and exhaust all possible variations on a theme…

“The visual language in the early works is clearly Philippine in subject and form, developing like the country into a world where national boundaries are slowly blurred into the international and global.”

The exhibit also shows how Luz liked to go back to the same themes years, or even decades, later, but approach them from a totally new perspective.

In Luz’s words: “It completes a cycle alternating between objective and pictorial reality. The transition from picture to painting is complete: We are fixed with an object which speaks entirely in plastic terms, with little or no reference to the visible world, where lines and shapes and colors are made to conform for their own sake, existing in a visual, created reality of its own.”

The exhibit also shows some of Luz’s sculpture. In 1969, the artist took a nearly decade-long break from painting to focus on sculptural work. As with his paintings, Luz’s sculptures— first in wood, then later in stone and metal—are explorations in pure geometric forms. Luz created several monumental works in metal, many of them as set-pieces for buildings designed by his friend, the architect Leandro Locsin, such as the Philippine International Convention Center and the old Philippine Plaza Hotel.

Apart from his own works, Luz was also hugely influential on the Philippine art scene as the owner and curator of Luz Gallery. For more than four decades, until it closed its doors in 2002, the Luz Gallery showcased the best local artists. Luz also invited artists he liked from other Asian countries to show in the gallery, and once a year, he would sell artifacts and antiquities he had gathered from his extensive travels through India and Southeast Asia.

“He had a global sensibility for someone who was essentially homegrown,” Ocampo says.