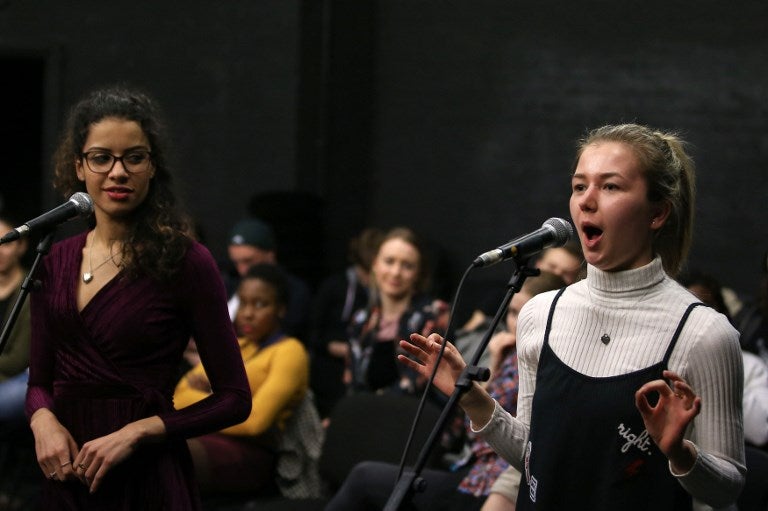 In this photograph taken on February 24, 2017, students rehearse a production alongside a band named "band call" at The Royal Central School of Speech and Drama in London's West End. They're in their early 20s and dream of, one day, singing and dancing on stage in London's world-famous West End. But students at one of Britain's top drama schools face a gruelling path to stardom. AFP

They’re in their early 20s and dream of, one day, singing and dancing on stage in London’s world-famous West End. But students at one of Britain’s top drama schools face a gruelling path to stardom.

First up, winning a highly prized spot at the drama school where some of the acting world’s greatest names honed their talents.

Thousands of hopefuls apply each year for one of only dozens of places on the Acting Musical Theater course at the Royal Central School of Speech and Drama.

“We wouldn’t offer a place unless we saw the raw talent,” said course leader Wendy Gadian.

“We need to absolutely see the gold”.

A stone’s throw from the iconic Abbey Road Studios, in north-west London, the school, known as Central, was founded in 1906 and has since established a global reputation.

Judi Dench, Vanessa Redgrave and Martin Freeman studied at the school, where AFP followed some of its current budding actors with a passion for musicals over several months as they were put through their paces in preparation for the all-important auditions.

In a rehearsal studio on a February afternoon, around 30 students get to grips with “Grand Hotel”, a musical adaptation of the 1929 novel by Vicki Baum.

“Let’s do that again!” comes the director’s call, as the sweating students perform with precision to a piano accompaniment.

During the break, some glean advice from the choreographer, while others drink from water bottles or lie exhausted on the floor.

“It’s very tiring, especially vocally tiring. It’s quite difficult going over the same, over and over again, and trying to polish it,” said Elliot Wooster, 21, whose tall and slim frame has been sculpted by dance classes.

Facing an intense 40 hours of training per week over three years, the students must master a range of skills to help them survive in an extremely competitive industry.

The school offers a whole host of courses, in everything from stage combat to puppetry.

Weeks after the “Grand Hotel” rehearsal, a black-tie audience clutches glasses of wine as they await the musical’s gala night.

Performed in Central’s huge theater, the play traces the lives of hotel guests in the period between the two world wars.

Wooster appears as the bellboy in the production.

Reflecting on her role as a dancer and singer, Lizzie Dewar, 24, another student, admits: “That’s exactly how I imagine my future job.”

But, she says, that her chosen career has proven tough and very difficult financially.

“It’s not the easiest of choices, but if you love it enough then it’s the only thing that you could end up doing,” she enthuses.

On stage, the young actors demonstrate their artistic maturity, leaving little for them to envy of the stars they hope to one day meet — or replace.

In search of future stars, industry professionals regularly watch shows at Central and are invited to pick up a copy of the students’ CVs at the end of the performance.

With the end of the academic year approaching in late June, the students begin knocking at the doors of London’s theaters, where a thriving industry made £645 million ($833 million, 735 million euros) last year.

The West End vies with New York’s Broadway for the title of global capital of musicals, with London theaters boasting shows such as “Les Miserables”, “Mamma Mia!” and “Matilda”.

But before Central students can reach such dizzying heights, they must prepare for the gruelling audition process.

Stephen Crockett, an influential London casting director, is brought in to give them experience in stepping into an audition with no familiar faces.

“There’s no comfort, walking into a room full of strangers and you’ve got to be able to show your abilities within three or five minutes,” he says.

The casting director watches impassively and takes notes as each student steps forward to sing two songs. He warns them against hitting the wrong note — a rarity among these young actors — and gives advice.

Lewis Murphy Parry, 22, delivers a poignant performance of “Stand By Me” by Ben E. King.

He will soon be diving into the unknown when he leaves Central, having already overcome his own anxiety and his father’s misgivings about his chosen career.

“Right now, I have a big mixture of excitement about what could happen… But there’s also of course a sense of fear,” he said. “That’s what makes it so unique.”