Out of the woods: Thai 'hermits' harness web to go global | Inquirer Lifestyle 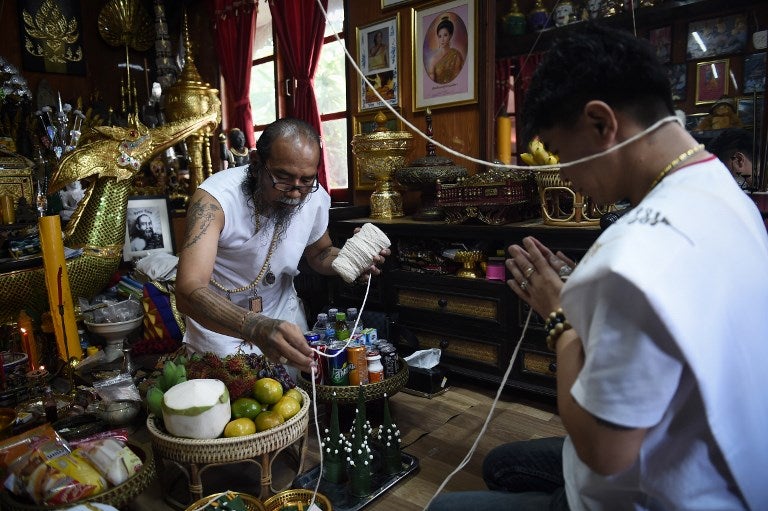 This photograph taken on May 20, 2017 shows 'hermit' Toon (L) preparing protective string before praying for his Taiwanese client at his home in the northern Thai province of Khon Kaen. From communing with forest spirits to whipping up love potions, Thailand's cave-dwelling 'hermits' once conducted their supernatural endeavours with just ancient magic and ritual as their guide. But today's sorcerers are more connected than ever: armed with smart phones, Facebook profiles and business-savvy, a new crop of mystics are harnessing tech to cultivate followings across Asia. / AFP PHOTO / Lillian SUWANRUMPHA / TO GO WITH Thailand-religion-technology, FEATURE by Sally MAIRS

Out of the woods: Thai ‘hermits’ harness web to go global

KHON KAEN, Thailand — From communing with forest spirits to whipping up love potions, Thailand’s cave-dwelling hermits once conducted their supernatural endeavors with just ancient magic and ritual as their guide.

But today’s sorcerers are more connected than ever: armed with smart phones, Facebook profiles and business-savvy, a new crop of mystics are harnessing tech to cultivate followings across Asia.

“Woah,” Toon says ominously as he peers down at an astrological chart on his smartphone, the tips of his scraggly grey beard dangling just above the screen.

“You will have some kind of accident by the end of the month,” he tells an AFP reporter, offering to conduct a ceremony to counteract the bad karma.

Surrounded by a cornucopia of glittering Buddha statues, eerie dolls and other spiritual trinkets, the 57-year-old uses sacred powders and ointments to conduct his ‘good luck’ ritual.

Several other hermits — known in Thai as “reusee” — are gathered in the teak-wood room in his spacious home in northeastern Thailand.

But hundreds of other disciples abroad are also hanging onto his every word, with a Taiwanese client broadcasting the ceremony on Facebook Live and translating for viewers back home.

“His customers and students want to see. They miss him,” the Taiwanese woman, Ann Liu, explains as Toon wraps protective string around her husband, a regular client.

A former bank employee, Toon is at the forefront of a growing number of ‘new age hermits’ to crop up in Thailand’s spiritual underworld — a densely populated scene of shamans, exorcists and astrologers.

While the kingdom is overwhelmingly Buddhist, there is still widespread belief in animistic spirits and ghosts.

Toon was called to the spiritual practice 16 years ago, swapping his secular garb for white robes, growing out his beard and decorating his arms in hand-etched tattoos.

Using Facebook and LINE to advertise his services, he has tapped a deep well of overseas intrigue — especially among ethnic Chinese — for rituals and charms aimed at boosting business prospects and mending relationship woes.

He now has hundreds of followers in places such as Hong Kong, Taiwan, China, Malaysia and Singapore, and travels far and wide to offer spiritual solace.

But his jet-setting is on his clients’ tab, in a luxury lifestyle that could not be further from the solitary, forest-dwelling existence of his predecessors.

Thailand’s traditional hermits were ascetics who disavowed worldly excesses and spent most of their time alone in the jungle, engaged in deep mediation.

“Now hermits have to live in towns so they can help people easily,” Toon explained to AFP outside his luxurious home — a decorated compound that merges a traditional Thai sala with a modern house, replete with a shiny black SUV in the driveway.

“Also, I have a wife and I’m worried she couldn’t live in the forest,” he added.

Anthropologists say Toon and his 21st century peers, whose numbers are estimated to be around 200 in Thailand, are only the latest players to profit from a “supernatural boom” in Asia.

Free-market forces and technology have abetted, rather than diluted, superstitions that can dictate everything from daily routines and business moves to high-level political decisions.

Thailand is renowned for its coterie of occult figures and spiritual fads.

Unlike other governments in neighboring countries like China and Vietnam that have suppressed folk religions, Thai authorities have given fringe practices a free reign to flourish.

Many of the must-have charms are aimed at promoting wealth and other modern aspirations.

“The reusees (hermits) fit into the recently emerging popularity of this kind of practice,” said Thai anthropologist Visisya Pinthongvijayakul.

“A lot of customers, especially business owners, now come to Thailand to seek auspicious power from alternative people other than monks,” he added.

It is undoubtedly a lucrative business for people like Toon, whose clients pay hundreds of dollars for the ceremonies.

Thanks to the power of the web, he now has more foreign customers than Thais.

But he claims his practice hasn’t changed at all.

“All of my followers are human… and so their thoughts are the same: they want love, they want good luck, and they want to be rich.” CBB