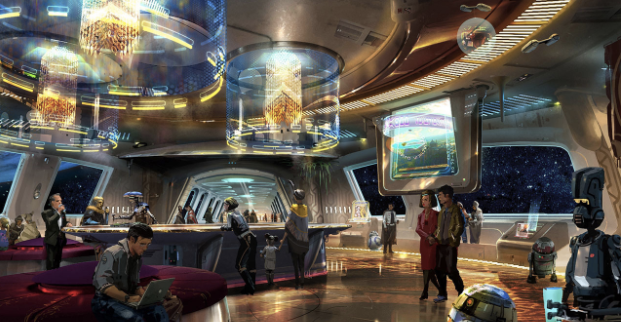 George Lucas’ “Star Wars” space saga is alive and kicking, with the blockbuster hit “The Force Awakens” in 2015 and “The Last Jedi” set to open this December.

Disneyland aims to bank on the pop-culture phenomenon by opening a Star Wars-themed hotel inside Walt Disney World and Disneyland Resorts.

As revealed over the D23 Disney fan convention over the weekend, the famed theme park company confirmed the development of a five-star hotel in its “Star Wars Land,” where guests can stay in what appears to be a massive spaceship.

Each room is also expected to highlight a totally unique story from the Star Wars fandom and feature familiar faces from the films.

Keeping up with the “space voyage” theme, window views also boast images from space, according to Disney Parks Blog.

The parks are expected to open sometime in Florida and Anaheim in 2019.  Khristian Ibarrola /ra