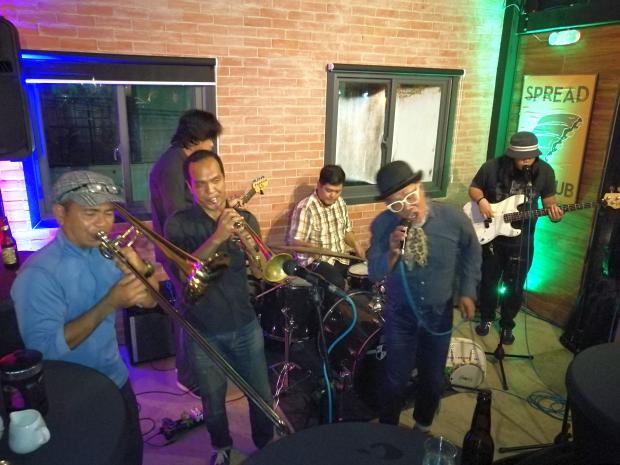 Bing Austria (in hat with microphone) and his Flippin’ Soul Stompers.

If the 1970s were regarded as the first golden age of contemporary Filipino music, the ’90s would count as the second one – a decade that saw dozens of bands rise to fame on the strength of their original compositions in albums that fans bought with zeal.

Some of these bands’ early songs were heard first on the then FM radio station LA 105, in a daily program dubbed “Filipino Alternative Show.” At the time I was a DJ on LA for several months, before being asked by Yano’s Dong Abay and Eric Gancio to be their manager. (In turn, I asked a friend, Arthur “Judge Dredd” Pimentel, to help me in the job.)

What followed were some of the headiest, most exciting moments of my life – watching Yano, the Eraserheads, The Youth, Parokya ni Edgar, Color It Red, Put3Ska, Tropical Depression, Kelt’s Cross, Rizal Underground, Orient Pearl, Binky Lampano, Joey Ayala (who brought his band, Ang Bagong Lumad, from Davao to settle in Manila with the Apo Hiking Society’s Butch Dans as manager); other groups that came a few years earlier like Coco Jam, The Dawn, After Image, Introvoys, True Faith, Rivermaya, and Prettier In Pink; the motley bunch of punk bands from the Twisted Red Cross label, especially Betrayed and Urban Bandits; and a hardworking band whose lifespan started in the late ’70s and who’s still active, The Jerks.

The best thing about these bands was that they played live with such raw, electric passion which instantly connected with the audience that went to their gigs at Mayric’s, 70s Bistro, and Red Rocks (later renamed Club Dredd).

Let’s see if they still have the fire that made the ’90s a bright spot in the history of Pinoy rock and pop.

I’ve seen the Flippin’ Soul Stompers perform at TSJ where the crowd had a great time dancing. I’d like to watch it again. Come to think of it, if “’90s Live” ends around 11 p.m., there’s enough time to run to TSM and catch the Stompers’ last set. /atm