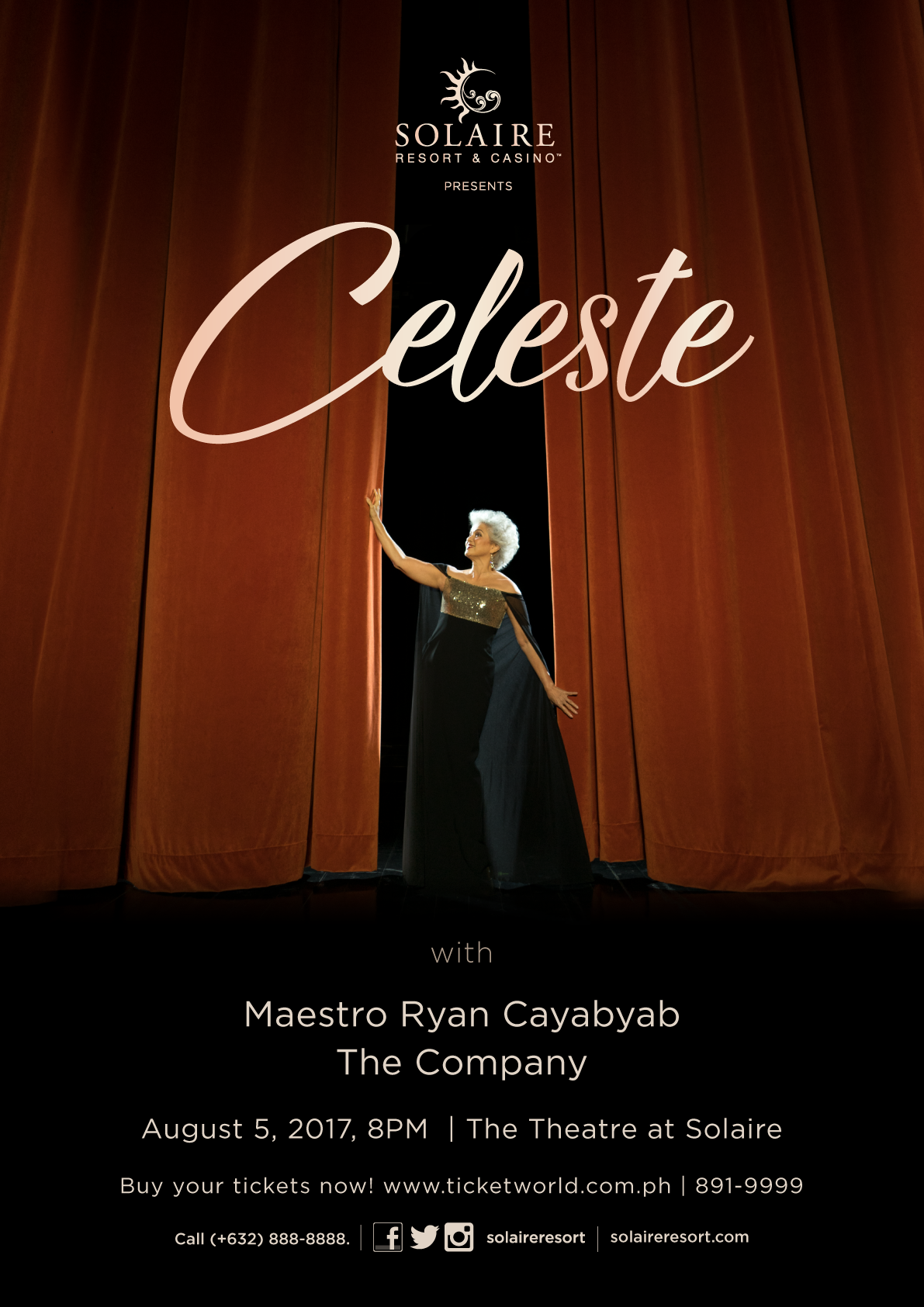 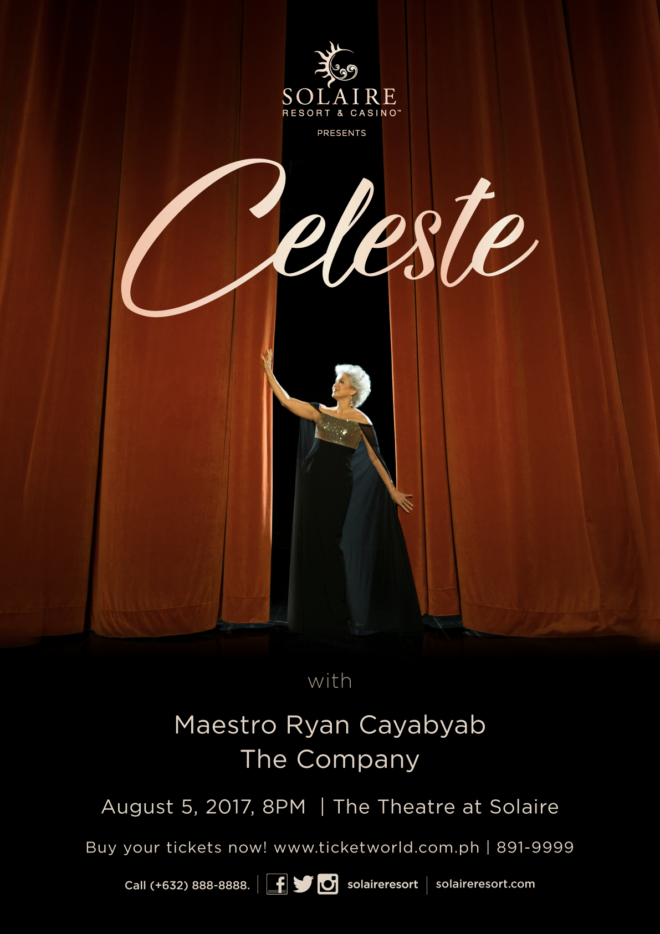 Celeste Legaspi-Gallardo—icon of Filipino popular music, advocate and patron of the arts, as well as theater, film and TV actress—is mounting her first full solo concert in some three decades, on Aug. 5, 8 p.m., at The Theatre at Solaire Resort & Casino.

The show is meant not just as a trip to the past, featuring the singer’s repertoire as consummate performer and recording artist in the ’70s; it also serves as a tribute to the centennial birth anniversary of her
father, National Artist for Visual Arts Cesar Torrente Legaspi.

Featuring The Company and with Ryan Cayabyab as the musical director, “Celeste” the concert comes on the heels of another of Solaire’s OPM (Original Pilipino Music) events, a solo show by another Filipino music icon, the balladeer Basil Valdez.

Her lineup, said Gallardo, would be “in the perspective of my father’s contribution to the country and within the tapestry of the music I created in the past.”

She is her father’s daughter after all, though their work may have involved different disciplines.

“This is a lesson I learned from my father: If I’m going to do anything, it has to be really excellent, so I push myself to the best that I can and expect the people around me to do the same,” shared Gallardo at a recent press event for her Solaire show.

“I guess in the process I’m considered mataray and pa-
diva-diva. I’m not sorry about it. I will not apologize because that is how we should live our lives—dedicate ourselves to excellence.”

That personal mantra has manifested in Gallardo’s career, which saw her evolution from doing covers of Barbra Streisand and Liza Minnelli hits, to singing and recording music by her husband, the prolific composer Dominador “Nonoy” Gallardo, who wrote that definitively Pinoy original “Saranggola ni Pepe.”

Her bluesy, mellifluous voice brought the melodies to song translations by Rolando Tinio, National Artist for Theater and Literature.

Her career and popularity organically shaped her into the champion for artists and lover of arts that she is today.

Along with longtime friend and manager Girlie Rodis, Gallardo established Musical Theatre Philippines, which produced a number of landmark original Filipino musicals such as “Katy,” “Larawan” and “Alikabok.”

The film version of “Ang Larawan,” with music by Cayabyab and adaptation by Tinio of the original English-language play by National Artist for Literature Nick Joaquin, is expected to open in cinemas in December.

Onstage, Gallardo was last seen at the 13th Virgin Labfest at the Cultural Center of the Philippines. She portrayed a retired prostitute in Layeta Bucoy’s “Si Dr. Dolly Dalisay at ang mga Ladybugs,” directed by Jonathan Tadioan.

Gallardo, who at the Solaire press conference proudly wore a short-sleeve blouse with a print of her father’s artwork, was just as proud to show us the thin, long scars on her arms—the result, she said, of Labfest rehearsals on a stage with complicated set pieces.

At age 67, Gallardo seemed blasé about getting herself injured for a one-act play. Wasn’t she a singer and recording artist first and foremost?

“Actually theater will always be my No. 1,” answered Gallardo, the dedicated Filipino artist.

“Celeste” the concert is on Aug. 5, 8 p.m., at The Theatre at Solaire Resort & Casino. Tickets available at TicketWorld. Call 8919999. Visit www.ticketworld.com.ph.