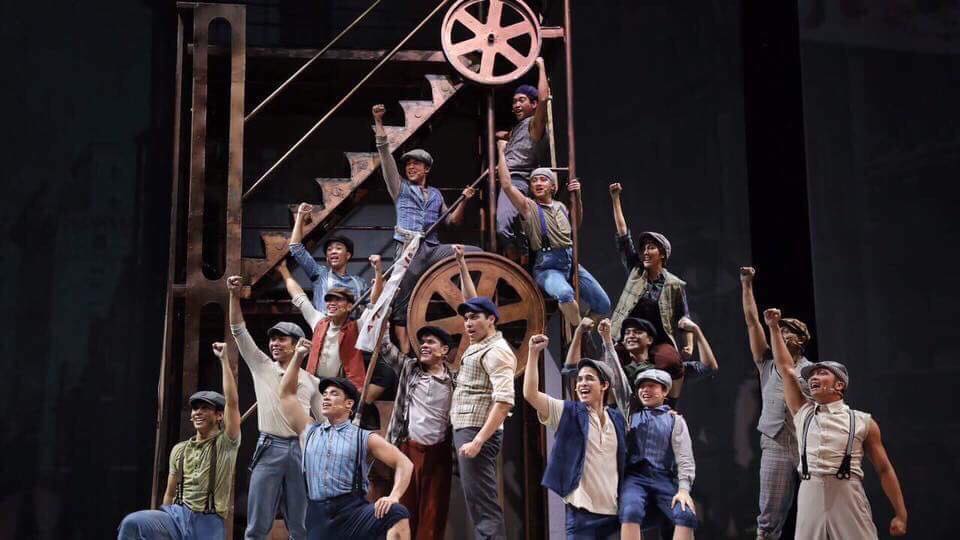 Who needs a good story, or at least a well-written book, when you can have the riveting spectacle of dancing men?

That seems to be the idea implicit in “Newsies,” 9 Works Theatrical’s latest venture at the Globe Iconic Amphitheater in Bonifacio Global City. The musical, adapted from the 1992 Disney movie of the same name, is a woefully distended creature, taking longer than it should to tell its tale of underdogs battling money-grabbing masters.

The story: In turn-of-the-century New York, Jack Kelly and his fellow newsies stand up to the powers that be and win the day. But Harvey Fierstein’s book is so bloated, it would float straight to the stratosphere were it made
of helium.

The score by Alan Menken (music) and Jack Feldman (lyrics) is an uneven mix, with only a few songs, like the wistful opening “Santa Fe,” latching onto the brain.

It’s the dancing that pumps life into this musical. And in this 9 Works production directed by Robbie Guevara, the choreography is a wholly original invention by PJ Rebullida.

It’s not every day that dance takes center stage in musical theater. But what a fortuitous month this has been, with “Newsies” running alongside another production that flaunts all-stops-out dancing— Atlantis Theatrical Entertainment Group’s “Kinky Boots,” with its bevy of high-heeled, hysterically flexible drag queens.

In “Newsies,” it’s the sight of balletic man-boys, tumbling and pirouetting every so often, that seizes the viewer’s attention. This acrobatic pageantry becomes even more impressive when one considers the fact that not all of them are seasoned dancers.

Rebullida’s work really perks this production up; some of the numbers, like the tap-dancing congregation of “King of New York,” would ring callow without his choreography.

The other reason to see this “Newsies” is Gian Magdangal, who returns to local stages after a few years of performing abroad. As Jack Kelly, Magdangal is a vision of leading-man aplomb, launching himself into the heart of the character without exaggeration.

It’s this sort of unembellished acting and charismatic self-assurance that sets him and Jef Flores (as Davie, who acts as Kelly’s right-hand man) apart from the ensemble. The two of them stand out without blatantly meaning to, while behind them, various accents, sometimes unintelligible dialogue and unnecessary physical gestures are thrown everywhere.

Not that the ensemble is wholly at fault here: “Newsies” is a story populated by a magnitude of one-note roles, just a few of which become credible characters in more experienced hands—say, Greg Dulcie as the antagonistic publishing magnate Joseph Pulitzer and Pinky Marquez, in the dispensable part of the actress Medda Larkin.

One may argue that the point here is not realism; this is, after all, a “kiddie” musical, constructed with topnotch entertainment values and convenient happy endings in mind. But as kiddie musicals go, the world, to play on a lyric, has certainly known better.

Where 9 Works “Newsies” succeeds, then, is in diminishing the scale of its source’s flaws. Here, the spotlight burns brightest on a pair of engaging lead performances and some of the finest dancing local musical theater has seen this decade. Now there’s a worthy headline. —CONTRIBUTED