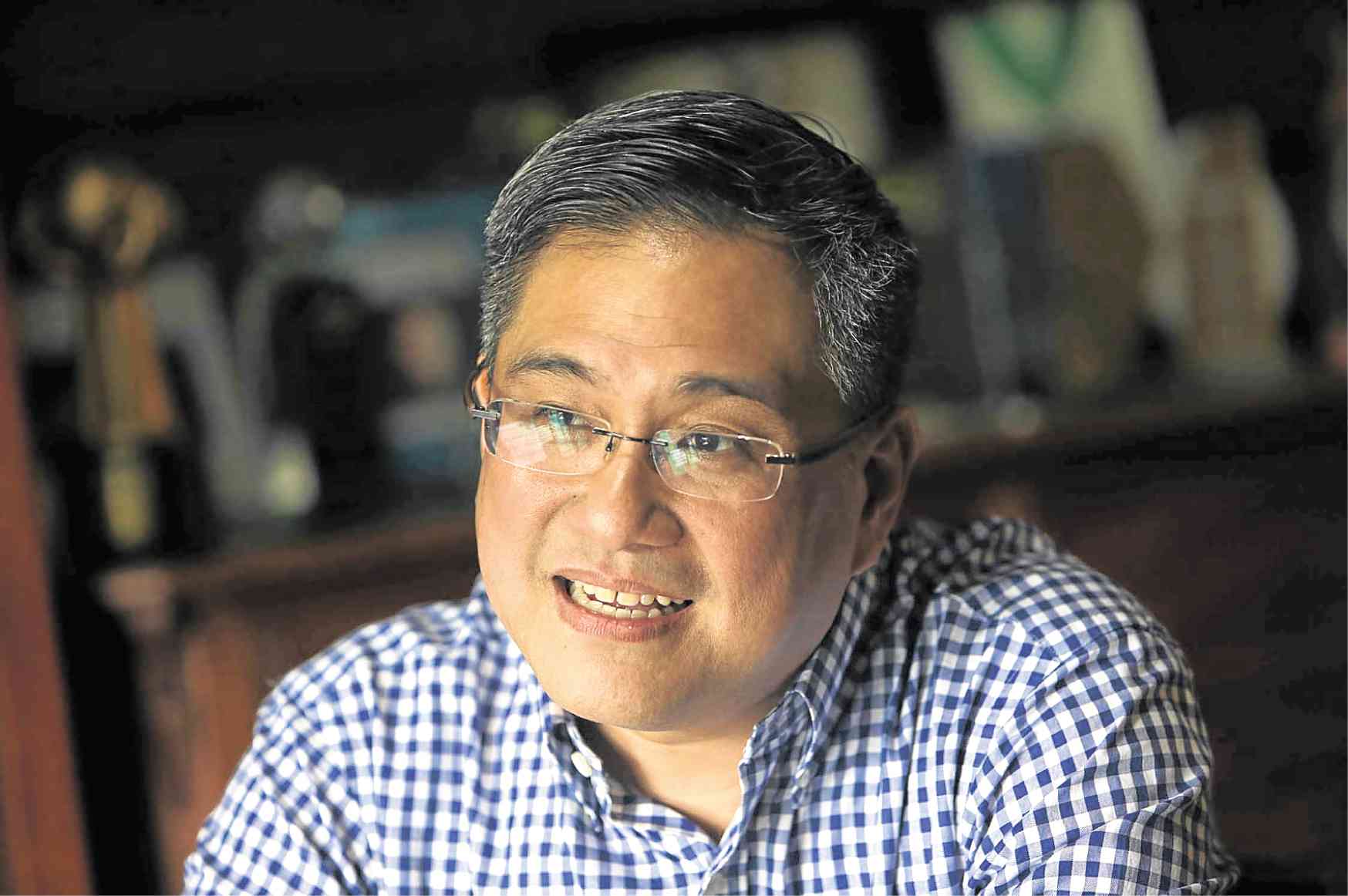 Let’s start with a few fun facts you might not know about the BBC’s Filipino news anchor Rico Hizon:

Yes, he is related to the Hizons of “Queso de Bola Ensaimada” fame: his father and the owners of Hizon’s Cakes and Pastries are second cousins, originally from San Fernando, Pampanga province. The Benedictine monk Dom Martin Gomez—fashion designer Gang Gomez in his former life—is also a cousin from the same clan.

When he was in third and fourth year high school at La Salle Green Hills, Hizon ran a “mobile”—a mobile disco sound system—with schoolmate and fellow broadcast journalist David Celdran. Hizon supplied the records while Celdran and other friends supplied the sound equipment and the van for transporting it to dance parties in Valle Verde, Corinthian Gardens and other exclusive enclaves.

Hizon still loves Echo and the Bunnymen, the Lotus Eaters, Pale Fountains and other ’80s new wave bands, and has a collection of over 1,000 vinyl records, including some very choice 12-inch dance remixes.

Hizon had no interest in and knew nothing about art until 1991, when he was asked to cover an exhibit of a Filipino artist who had just returned from London. The paintings touched something in his soul, and Hizon found himself withdrawing all his savings to purchase his first BenCab.

He remains passionate about art: he and his wife Melanie collect works by contemporary Filipino artists, including many more BenCabs. He also calls the National Artist compadre, BenCab having stood as godfather to Hizon’s son Migo.

When he was just starting out as a broadcast journalist, Hizon also entertained thoughts of entering the world of musical theater. He auditioned for and was accepted by Repertory Philippines and was deep into rehearsals for their production of “Camelot” when he had his “road to Damascus” moment.

Hizon had been working at GMA 7 by day and rehearsing with Rep until well past midnight, grabbing only a few hours of sleep before doing it all over again. Exhausted, Hizon was driving home from rehearsals when he got into a horrendous road accident. His car was totaled; Hizon walked away, miraculously unscathed.

It all worked out in the end, however, because all that voice training and stage acting has served Hizon well.

“If you watch me on TV, I’m not your stiff-upper-lip, formal type of presenter,” he says. “I’m very animated onscreen and I move a lot, because apart from presenting the news, I want my audience to feel the story. That’s how art enters my presenting style—for any news anchor, it’s a performance.”

At least 10 times a day on most days, Hizon’s face and voice are beamed out to 450 million viewers around the world from the BBC World News’ Singapore hub. As the anchor (or in British broadcast parlance, “presenter”) of the “Newsday” and “Asia Business Report” programs, Hizon covers mostly economic news from the Asia-Pacific region. Once in a while, he also goes out in the field to do breaking news stories or to work out of the “Mothership”—the BBC’s London headquarters.

More than just a talking head, however, Hizon is still the only on-camera Filipino face in international network news since he joined the BBC 15 years ago, after serving stints at CNBC in Hong Kong and GMA in Manila.

“Whenever I sit in my anchor’s chair, I’m proud to be a Filipino and raise the Philippine flag,” says this La Sallista. “I just wanted to maintain my own identity. I didn’t want to change. Other people have branded my accent—which is neither British nor American—as the pan-Asian English accent. It’s right there in the middle: it’s clear, it’s understandable and I get my message across.

Not everyone is thrilled, though. Hizon gets his share of haters and he’s been called a “twat,” a “smarmy ponce” and worse online, mostly by apparent racists who expect the British Broadcasting Corporation to be more, well, British, even as the media giant aspires to extend its reach beyond the borders of the old empire.

Hizon shrugs it all off.

“You will always have critics, but you just have to continue doing what you do,” he says. “Just be passionate about your work and do it to the best of your ability every show.”

Fallback
Born in 1966, Hizon had wanted to be a broadcast journalist since he was in grade school, when he would come home and watch the evening news on TV with his mother.
“It was Newswatch or GMA Balita in the 1970s, with Harry Gasser, Bong Lapira and Jose Mari Velez—the pioneers of primetime news,” he recalls. “That’s where I picked it up. I wanted to be a reporter, a news anchor, I wanted to be where the action is.”

Hizon studied Communication Arts at De La Salle University but also took a second major in Business, to please his parents and as a fallback in case journalism didn’t work out.

Hizon started out as a production assistant at “Uncle Bob’s Lucky Seven Club,” a children’s variety show. But he soon worked his way up the broadcast industry ladder, doing current affairs programs such as Art Borjal’s “Issues and Answers” and Dong Puno’s “Viewpoint.” Eventually he found a spot with CNBC in Hong Kong, where his business background served him in good stead. Then in 2002, the BBC came calling.

Today, 15 years later and at age 51, Hizon admits that he’s right where he wants to be. In his downtime, he returns to the motherland whenever he can; although all three of his older siblings also live and work overseas, his father still lives in the family home in Makati City.

“I slide right back in,” he says. “It’s like I never left. I can be driving right-hand in the morning in Singapore, where there’s no traffic, and in the evening I’m driving left hand in Manila traffic. I don’t mind. I’m cool with either situation.”

Lately, Hizon has been working on a large format book on his and his wife Melanie’s collection of over 100 palette paintings, that is to say, paintings done on wooden artist’s palettes. Some years ago, while vacationing in Europe, the couple bought a number of variously-shaped wooden palettes. They had a flash of inspiration: What if they asked their artist friends in Manila to paint on these palettes?

BenCab did the honors for the first one, and the collection has grown over the years, and has been exhibited in Singapore and other countries. Hizon hopes to publish the book in the coming months.

It’s not the first art project he has “midwifed.” In 2015, for the celebration of Bencab’s 50th year as an artist, he helped produce “Sabel: Love and Passion,” a musical production on Bencab’s perennial subject, the derelict Sabel, with libretto by Freddie Santos and music by Louie Ocampo.

His sustained enthusiasm for the project was instrumental in finally getting it produced and staged, with Iza Calzado in the lead role, just in time for the BenCab restrospective.

Ever since his epiphany in 1991 when he first discovered the beauty and power of Philippine art, Hizon has been a passionate art lover. Luckily, he found a kindred spirit in his wife of 19 years, Melanie.

“We both love art and 99.9 percent of the time, we both agree on the pieces we acquire,” he says. “Apart from BenCab, my wife and I are big collectors of the Saling Pusa group—Elmer Borlongan, Mark Justiniani, Jose Santos III, Anthony Palomo and other artists such as Rodel Tapaya and Marina Cruz—figurative contemporary art … But we’re very patient collectors: we don’t buy just for the sake of buying. Eventually, you will see that there’s a synergy in our artworks. We’ve passed on works by artists whose prices have multiplied 10 times over since, but no regrets. We never buy an artwork as an investment, we buy it because we love the piece, we connect with the piece and it will fit with the overall theme of our collection.”