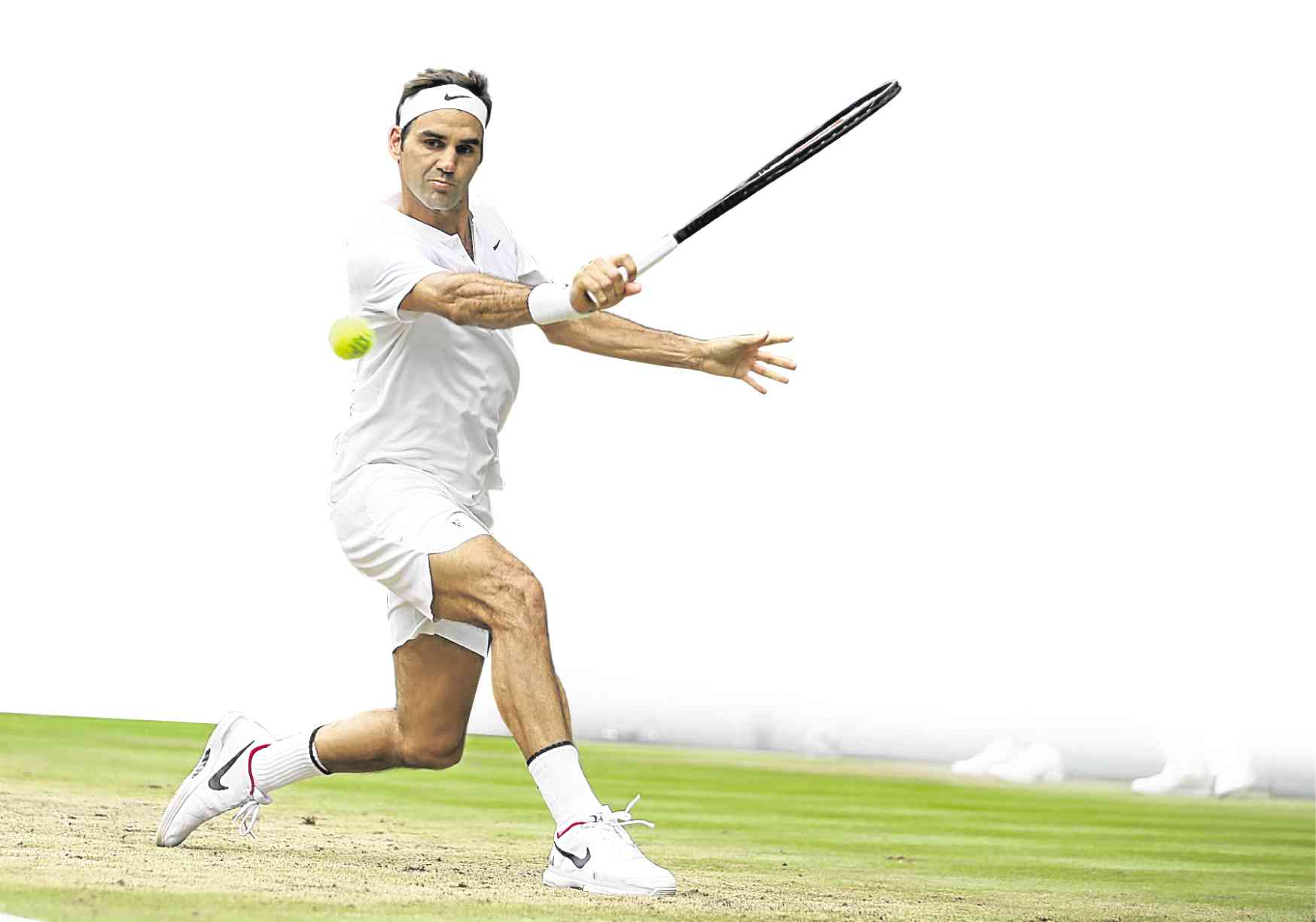 Federer in 2017Wimbledon: That backhand! —AP

What? Explain Federer? How? Why?

Roger Federer is one of those masterworks of nature that defy explanation. It may be possible—but, again, only by very subjective and very general approximation—to describe him and what he is able to do in human terms, in the context, say, of certain sciences, like geometry, physics and physiology. And I’d like to do that, if only to affirm to myself—and console myself, too—that he somehow belongs in my species and also that he might not mind my being a bit familiar by calling him Roger.

Roger is 35, less than half my age, but we both—if I may momentarily insert myself—are mocking human standards: Roger won his eighth Wimbledon last week, the very same week I myself went unbeaten. But let us not go any further into my case; it’s been bruited about cruelly enough to make some younger men think of switching to golf. Let’s talk instead about a distant, safe, and less emotional subject; let’s talk about Roger.

To be fair to Roger, I didn’t need to tell him about the workings of angles, parabolas, velocities, air densities, wind resistance, traction, and such things. Apparently not only does he already know about those things, he is able to work them to advantage, instinctively and with the least effort.

He knows he doesn’t have to get his serve up to 120 mph; he knows that at 115 or 118 he gets the job done, without wasting an ounce of energy or sacrificing an inch of accuracy. He knows how to create the acutest of angles; he knows how much over-spin to put to his shot in order to drive that ball at just the right pace and on just the right arc for a spot-on landing.

He knows; I didn’t have to show him.

And how he knows angles and pace! If he has slowed with age you don’t detect it. He has adapted by effectively shrinking the court. He now operates close to the baseline to cut the angles and prevent any balls hit to him bounding and spinning out of reach. He catches them early and, with such incredible timing, hits them back on their rebound, thus gaining power on little energy. No one hits as early as Roger does: His hit seems like a three-quarter volley.

And don’t ask about his volley. He punches it deep with a short chipping stroke, making it skid, or cuts it dead in its cushioned bounce on the grass. His Croatian challenger, Marin Cilic, ended up in the exact same condition.

Grass is in fact the chief determinant in the Wimbledon equation. Cropped to 8 mm and moistened by sweat drippings (and, additionally in this particular championship, by the tears Cilic shed in self-mourning), Wimbledon grass plays fastest, favoring big hitters. But Roger more than makes up with unpredictability and accuracy for what he may lack in hitting power. And he reads oncoming shots very well.

Grass also calls for some balancing act. It offers none of the traction that inspires some surefootedness, unlike the hard courts of New York or Melbourne; yet it is too slippery for the tactical sliding that the Parisian clay of Roland Garros allows. Roland Garros in fact discriminates against a tennis classicist like Roger. Its courts are so slow the ball does not die until someone intervenes with a knife or a hammer.

Ah, but at Wimbledon, he dances with such confidence and grace, the current World No. 1, the two-time Wimbledon champion, the great Scot himself who has been made a native son of England and Wimbledon by knighthood has reason to be envious.

Sir Andy Murray crashed out in the fourth round with a hurt hip, a recurrent injury doubtless aggravated by the physiological demands of grass. Even with suitably experienced British feet on home court and natural foot speed, he has tumbled on it—and so have many others.

But have you ever caught Roger down on the grass other than in reflex celebration of one of those eight championships, after letting himself drop on his knees or on his back to luxuriate in both relief and triumph upon scoring the final point? Nobody but nobody knows grass as well as he does.

If I must tell you, I happen to have known grass myself, from firsthand experience, maybe not the exact grass grown in Wimbledon soil but something I would think comparable—a grass court built to Wimbledon specifications. And I have no reason to doubt its owner’s certification to precise replication.

A more fastidious tennis gentleman than any other I have known, Gene Tanseco built his own Wimbledon in Marikina. —CONTRIBUTED