Via Dolorosa in Jerusalem on Ramadan: ‘Very probably’ the tomb of Christ | Lifestyle.INQ ❮ ❯ 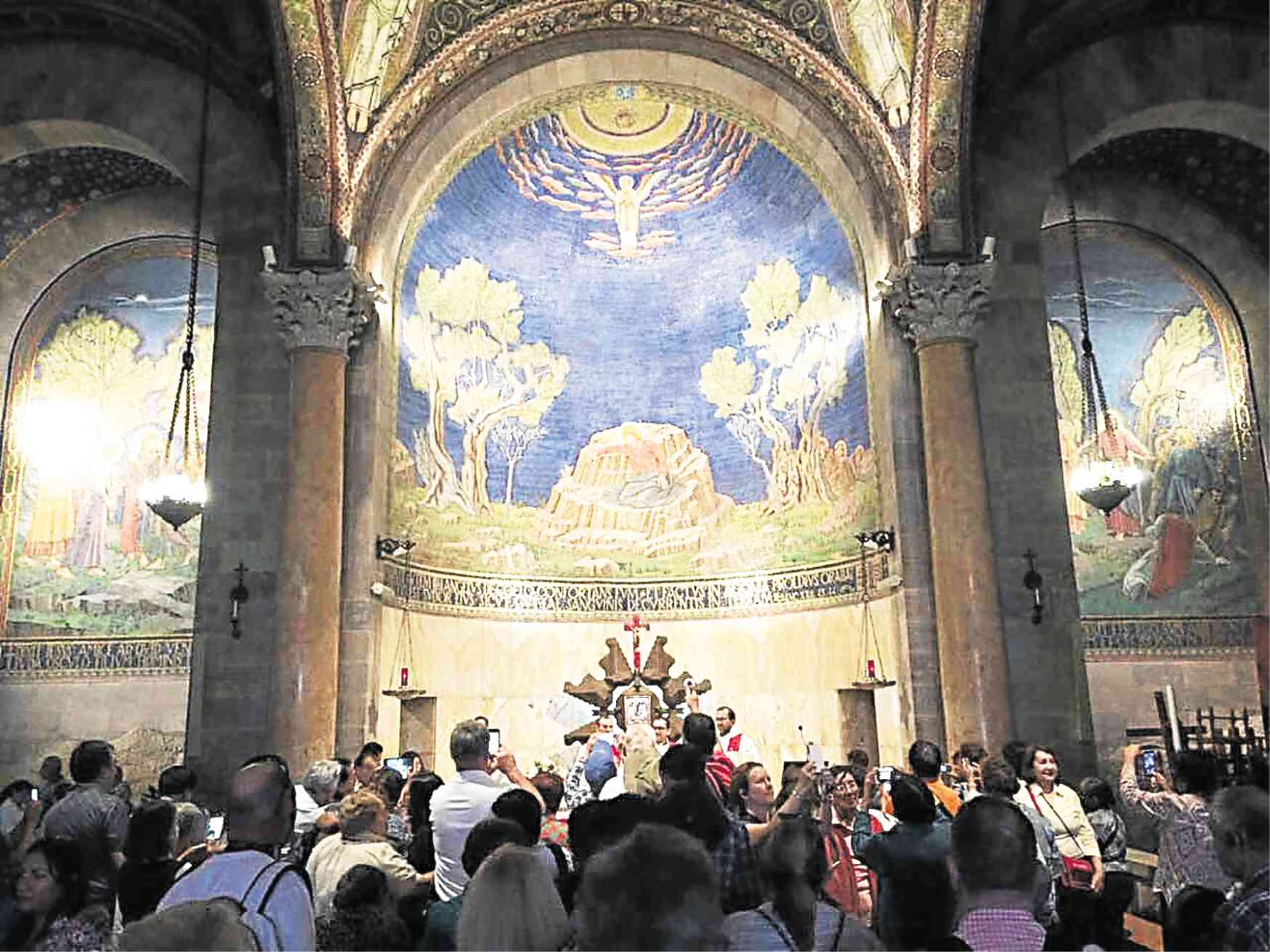 Interiors of the Basilica of the Agony, or Church of All Nations —PHOTOS BY LITO B. ZULUETA AND LESTER BABIERA

Via Dolorosa in Jerusalem on Ramadan: ‘Very probably’ the tomb of Christ

The Seventh Station (Jesus Falls the Second Time) is marked by two Franciscan chapels built on top of each other, with the lower chapel containing a large stone column from the Cardo Maximus, the main street during Byzantine Jerusalem, again a relic from the tortuous history of this most labyrinthine, byzantine of cities.

The Eighth and Ninth Stations (Jesus Consoles the Women of Jerusalem and Jesus Falls the Third Time) are very near Calvary, but because of the constructions in the last century, a long detour has to be made and the pilgrimage becomes more roundabout and extended.

The landmark in the Ninth Station is the Coptic Chapel of St. Helen under the Coptic Orthodox Patriarchate. From hereon, the rest of the five stations are inside the Church of the Holy Sepulchre.

From the Ninth Station, we went to the rooftop of the Holy Sepulchre Church (really a terrace and a courtyard) and entered the door where we found the chapel of the Ethiopian Orthodox Church. We found monks of the ancient Ethiopian Church praying before equally ancient Orthodox icons.

In his “Gospel Lands” travel essays, the late Manila-based Spanish Dominican scholar Fr. Pedro Gonzalez Tejero said the monks’ main occupations were “to dedicate long hours to prayer and to give spiritual assistance to the Ethiopian colony in Jerusalem.”

Meanwhile, in his Oxford “Holy Land” archeological guide, Fr. Jerome Murphy-O’Connor said the Ethiopian monastery really started as “mud huts” when the Ethiopian Orthodox Church became self-governing in the early 20th century from the Coptic Patriarchate that subsequently expelled them from the Holy Sepulchre.
The Coptic Patriarchate has since been trying to expel them from the courtyard, an instance of the antagonism or “mutual suspicion” of Christian churches over jurisdiction and control of Christ’s tomb.

“Silent and inward-looking, the immense dignity of the tall, slender men generates the atmosphere of contemplation so desperately lacking in the Holy Sepulchre,” wrote the Dominican scholar from the Ecole Biblique et Archeologique in Jerusalem, the oldest graduate school in biblical archeological studies.

Before we made our exit, we saw a big icon depicting the Old Testament incident of Queen Sheba of Ethiopia paying a visit to King Solomon in Jerusalem. She would convert to Judaism and bring back the religion to her land.
In the Acts of the Apostles, an Ethiopian eunuch at the service of the queen was doing a pilgrimage of Jerusalem, and impressed by the preaching of Philip the Apostle, converted to Christianity, thereby making Ethiopians among the earliest and perhaps the oldest of Christians.

Church of the Holy Sepulchre

Going down from the Ethiopian Orthodox upper chapel, we reached the penultimate stations located in what would turn out to be the nave of the Church of the Holy Sepulchre.

Because we didn’t enter the church from the main door downstairs, and because the last five stations are not marked inside, we didn’t get to see immediately the 10th Station (Jesus Is Stripped of His Clothes), which can be found when one ascends the stairs immediately at the right side of the main door of the church, historically believed to be the foot of Calvary.

A window along the steps looks into a small worship space, the Church of the Franks, referring not to the Germanic people that conquered Gaul during the fall of the Western half of the Roman empire, but to the Franciscans, the traditional custodians on behalf of the Roman Catholic Church of the important Christian sites in the Holy Land (Israel and Jordan).

Between the 10th and 11 Stations (Jesus Is Nailed to the Cross) is a beautiful mosaic of the Crucifixion that represents both stations.

Atop the stairs is the nave of the church, and there one would find the 11th Station, specifically in the right nave marked by another Catholic chapel, the Chapel of the Nailing to the Cross.
On its ceiling is an anachronistic but significant item—a 12th-century medallion of the Ascension of Jesus. It is placed there because it is the only surviving Crusader-era mosaic in the church.
But on second thought, the Ascension icon may not be disparate with the chapel dedicated to the Crucifixion after all. By allowing Himself to be nailed on the wood, Christ unbounded humanity from death and the wages of sin, and released it to the heights of authentic freedom. His crucifixion was an oblation that prefigured universal ascension.

The 12th Station (Jesus Dies on the Cross) is on the left side of the nave marked by the Greek Orthodox Chapel of the Crucifixion. Beneath its altar is a silver disc that marks the place believed to be where the Cross of Christ was fixed. A round hole in the disc is the limestone rock of Calvary that pilgrims touch and venerate.

Father Tejero wrote: “Pilgrims hold this place in great veneration for it was here where Jesus hanged between heaven and earth for three hours and spoke his seven last words. And having completed his mission, he bowed his glorious head and gave up his life for the love and redemption of men.”

The 13th Station (Jesus Is Taken Down from the Cross) is marked by the Catholic altar dedicated to Our Lady of Sorrows, with its powerful and moving iconography of Mary’s heart pierced with the sword of pain and sorrow. The beautiful statue of the Mater Dolorosa was given by the Queen of Portugal in 1888.

The 14th and last Station is reached when one descends the stairs from the nave and the actual Tomb of Jesus is placed at the center of the basilica. The tomb is housed in an edicule (small edifice). The tomb proper, according to Father Tejero, is 2.07 meters long and 1.33 meters wide.

When we went inside after a long queue, we found the place cramped, and pilgrims had to be hurried by the custodians so that others outside could be accommodated.
But the short stay was enough to afford us to say our prayers devoutly before the marble slab that now hides the original rock that covered the tomb.

Coming into contact even with just the marble slab unleashed in us a host of emotions and associations, much like Thomas Didymus coming into contact with the wounds of Christ, his doubts banished, his faith restored.

All of this took place within the transit of a second amid the racket inside the Church of the Holy Sepulchre.

Father Murphy-O’Connor quickly disabused Christian pilgrims’ romantic notions about the Tomb of Christ. He said the Church of the Holy Sepulchre had “anonymous buildings clinging to it like barnacles,” and that it was “dark and cramped” and noisy and even bereft of holiness, especially when one would see “the jealous possessiveness of the six occupants—Roman Catholics, Greek Orthodox, Armenian Orthodox, Syrians, Copts, Ethiopians—who “watch one another suspiciously for any infringement of rights.”

But is this noisy basilica really the place where Christ died and was buried? “Yes, very probably,” Father Murphy-O’Connor said.

“The most important argument for the authenticity of the site is the consistent and uncontested tradition of the Jerusalem community which held liturgical celebrations in the site until 66,” he wrote.

This claim to authenticity was reinforced by the emperor Hadrian who, bitter over the Jewish wars, filled in the site (actually a quarry) to provide a level base for his Capitoline temple to honor pagan gods.

When the Roman edict against the Christians was abolished and Christianity found favor in the empire, Macarius, fourth-century bishop of Jerusalem, petitioned Constantine to demolish the Capitoline and restore the tomb of Christ.

Father Murphy-O’Connor quoted the history of early Christianity written by St. Eusebius, bishop of Caesarea, who witnessed the excavation: “At once the work was carried out, and, as layer after layer of the subsoil came into view, the venerable and most holy memorial of the Savior’s resurrection, beyond all our hopes, came into view.”

How was the tomb identified? There were marks by the first Christians who had held the earliest liturgical celebrations there.
“Graffiti probably identified the tomb of Christ,” Father Murphy-O’Connor declared, “as they did the tomb of Peter at the Vatican.”