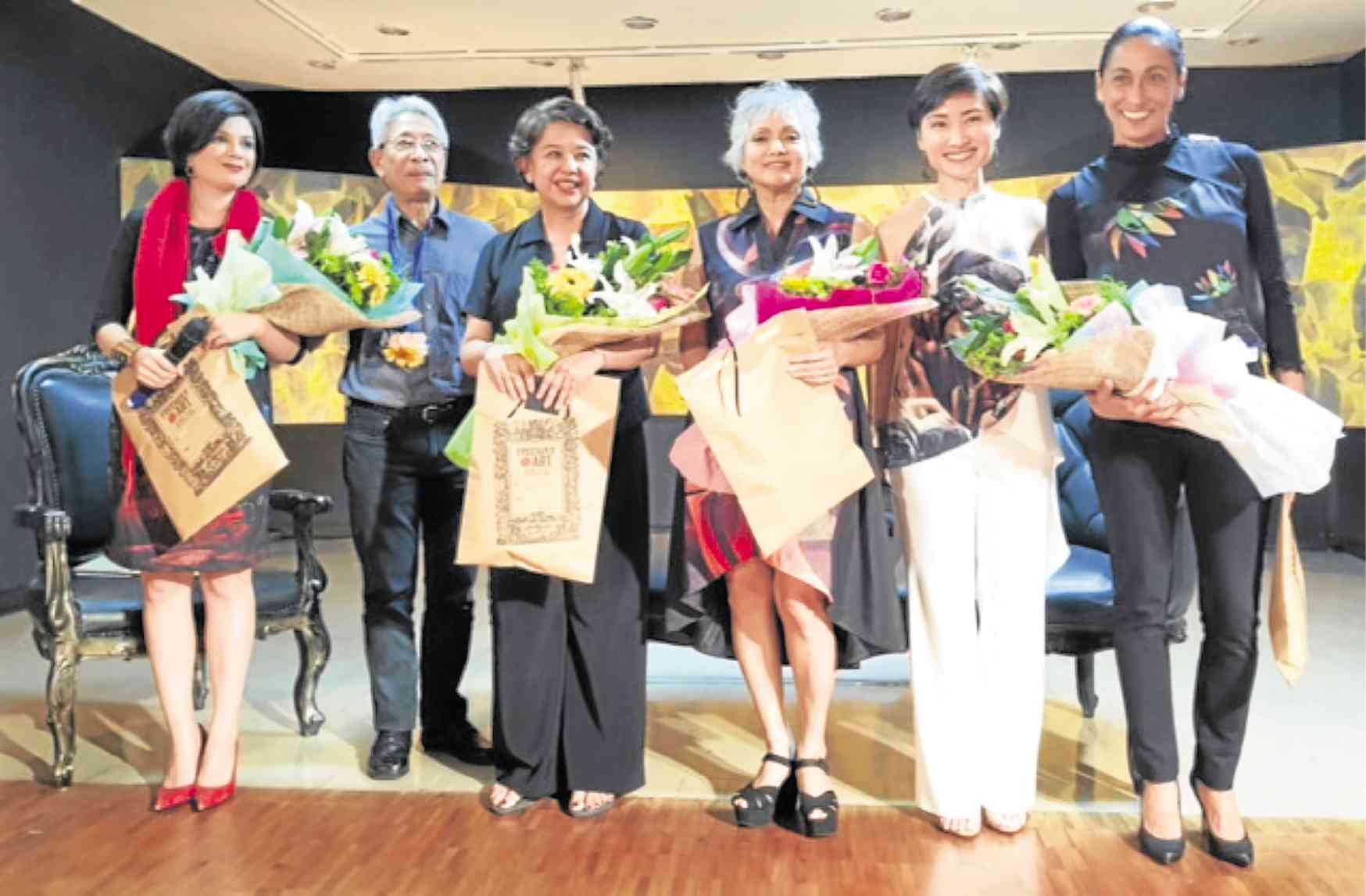 With works from Legaspi (National Artist for Visual Arts, 1990) and Joaquin (Literature, 1976) on display at the Cultural Center of the Philippines (CCP) via two separate exhibits, guests that night were treated not only to a fantastic fashion show featuring Freeway’s 49-piece dual collection but a little but of history lesson as well.

Host Lexi Schulze sat down with special guests Celeste Legaspi, Bing Villegas and Charo Joaquin-Villegas who shared their fondest memories of the two National Artists whose birth centennial is being celebrated this year.

“My papa was very much like Nick Joaquin who was very shy,” Legaspi said. “I grew up with an artist in the house. Every day he was always painting but he was never ‘OA’ or dramatic. He was never looking for inspiration. He was just always working. That’s what I remember. At 8 in the morning [he’d start working], lunch, then he’d take a little siesta and then he’d be working again.

Legaspi added that despite her father being color-blind, he was able to overcome it and, in fact, executed works noted for their bold use of colors and lines.

“I think this was his greatest accomplishment,” Legaspi said. “And I think this is one lesson we can teach the youth—that we can do these things, we just have to find the strength and the focus and aim for excellence all the time.”

Joaquin, who was the very first inspiration for Freeway when it conceptualized its National Artist Collection’s Series in 2009, was a staunch advocate of freedom. His poems, stories and plays earned acclaim, as well as his journalistic and historical works written under his pseudonym Quijano de Manila.

Joaquin is known for his love of beer. One time, he and Legaspi were both in Spain and they spent time together exploring the country and drinking tangards of brew.

Joaquin’s nephew-in-law Bing recalled having to avoid drinking with Joaquin as it was almost always a certainty that they would get really drunk.

Joaquin’s niece Charo thanked Freeway for continuing to honor the writer and expressed hope that his legacy would live on “because we have so much to learn from him.”

Actress Cherie Gil enthralled the guests with her reading of an excerpt from Joaquin’s “A Portrait of the Artist as Filipino.”

As in previous years, Freeway also awarded the winner of its annual Art Bag Design contest, John Bermerjo, for his artwork “Harana,” which bested over 100 other entries.

The launch was made possible through Freeway’s partnership with the CCP and Zalora, which helped produce the show. Janilyn provided the footwear used by the models.
—CONTRIBUTED