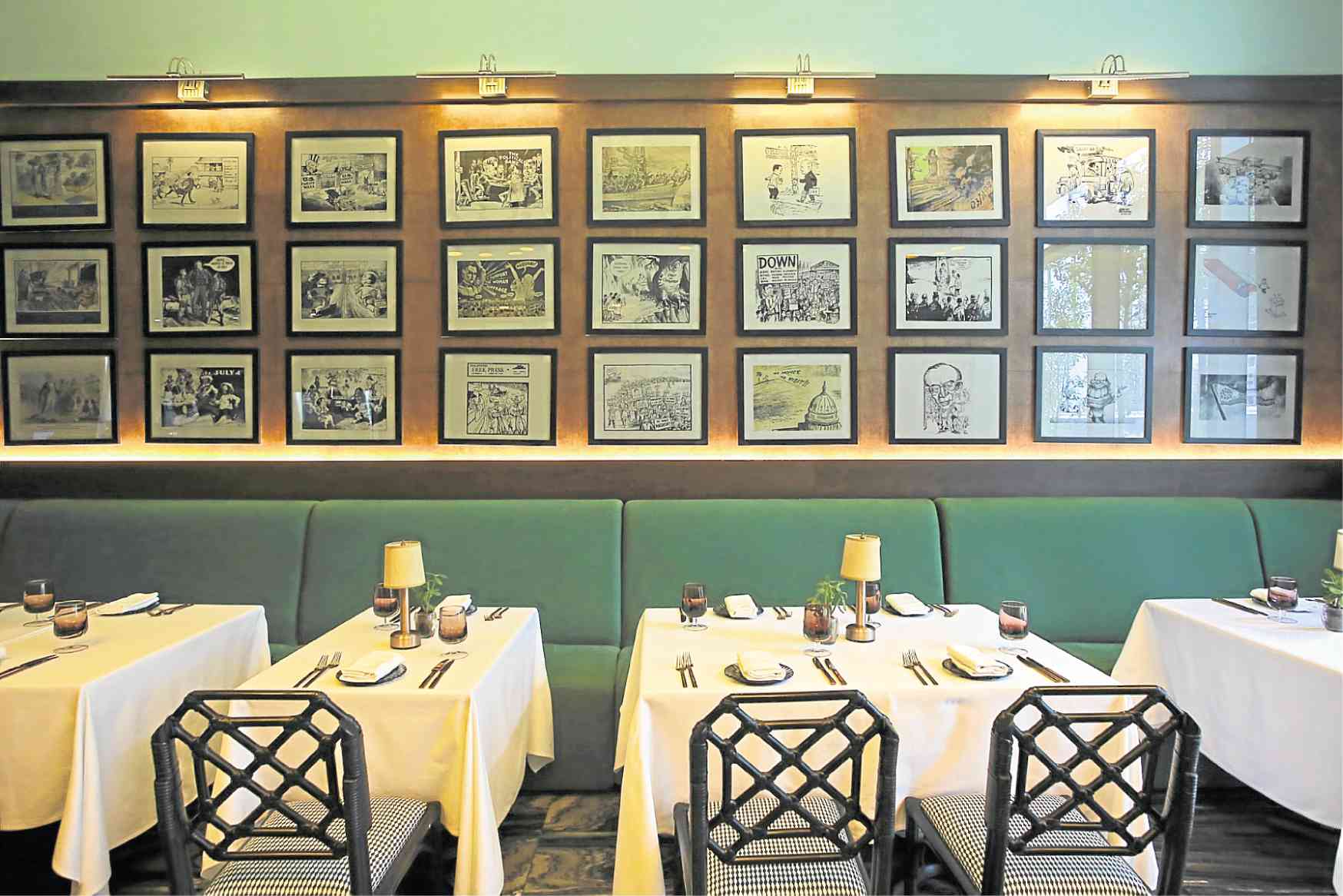 Manila House: What’s the political color of your steak?

The Grill, the ultra exclusive Manila House’s newest attraction, is hardly 2 months old yet it has already gained buzz for the mouthwatering, two-kilo USDA prime grade tomahawk steaks, half-pound rib-eye and lamb chops that keep the place packed during weekends.

An open kitchen with glass walls to prevent food odors from clinging to the diners’ clothes completes the cozy 80-sq m restaurant.

The atmosphere would have been pure testosterone except for the framed editorial cartoons that adorn its walls.
With many of them dating back to the mid-20th century, the cartoons offer snapshots of the country’s political, economic and social history through drawings and caricatures that carry cheeky comments about times past.

This detail is deliberate, Manila House’s Ricco Ocampo said. Mind you, the team that chose the cartoons made sure that those from more recent administrations starting with that of Ferdinand Marcos are part of the set.

Apparently, the team did not want to leave anyone out and ruffle any political feathers. “We have Marcos, (Fidel) Ramos, (Cory and Noynoy) Aquino and (Rodrigo) Duterte,” he added.

“We wanted a statement on the wall that would give the diners something to think about. The ups and downs of Philippine history, from the colonial times… how it evolved. But we didn’t want to do it with something so serious. Being in a grill room is serious enough,” he noted.

Ocampo chuckled when reminded of observations that The Grill could stand in for his own home. “There are a lot of similarities,” he admitted.

Ocampo added he has worked with the Belgian architect Gert Voorjans, who designed the restaurant, on other projects.

Ocampo pointed out that Manila House intended The Grill to be “more sober” than its other restaurants including Bonifacio Lounge, Avenue Bar and the Japanese-themed Issho. A fifth eatery, Anahaw, will serve Filipino fare when it opens.

“Unlike the other Manila House spaces that keep evolving and changing, we want a sort of permanence for The Grill’s design. Something that will stand through time,” Ocampo said. Not too staid though, he quickly added.

“I don’t want (Manila House) to look like a hotel or a new establishment. It’s a home away from home for the 700 members (so far). A very lived-in atmosphere. Intentional. Bohemian. I want it to have character. We’re trying to create a certain atmosphere,” Ocampo said.