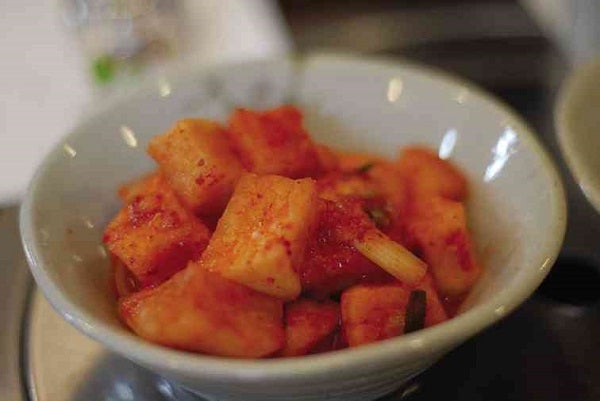 KIMCHI, the traditional fermented Korean dish made of vegetables with a variety of seasoning. PHOTO BY ROSEMARIE RAZON

Years ago, visiting Seoul and Daejeon, South Korea, we had to go and check the wet markets. What caught our attention was the abundance of reddish vegetables—fermented and pickled cabbage called kimchi.

Kimchi is the ever-present dish in every Korean meal. (It’s spelled “kimchee” in a Korean cookbook.) What is it, really?

When red-hot peppers were brought to Korea from Japan between the 17th and 18th centuries, they greatly influenced Korean cuisine, with kimchi becoming its most traditional dish.

Kimchi is pungent, fermented/pickled Japanese cabbage, seasoned with lots of hot peppers and served at every meal together with whatever is on the table—soup, meat, etc.

It takes courage to eat kimchi, as it is always very spicy.

But Korean food is more than kimchi. We now dine on bulgogi, bibimbap and chapchae. In the course of any Korean meal, you will note that the prevalent flavor of every dish is sweet, hardly any oil is used, the fare is mostly grilled, and thus it’s quite a healthy cuisine.

This restaurant is nearly 80 years old, established in 1938 by a lady named Bun-in-Koo in North Korea. She eventually moved to Seoul, where her barbecue gained prominence and international acclaim.

The marinade she used, especially for bulgogi, was a blend of at least 12 juices of different vegetables and fruits, including apple, pears and pineapple, blended with soy sauce, sesame oil, celery and wine.

Dining area: Always crowded with fans of Korean barbecue. Tables are mostly for six diners. The place is smokeless, even if most food items are grilled in the unusual ceramic charcoal-fed stoves.

Suggested orders: At Sariwon, diners are offered package meals starting at P2,999 for a table of four. This makes it easier to order because each combination mostly includes the specialties—bulgogi; galbi jim (either beef or chicken, stewed in flavorful broth and spices); chapchae; Korean noodles with meat and vegetables garnished with strips of scrambled eggs; and our favorite bibimbap, a dish of rice topped with savory meat and vegetables.

Individually ordered, each dish is presented like a work of art—pretty and temptingly attractive.

Dessert is offered, and tea should wash down the food quickly. This is truly a value-for-money meal.

Government and service charges are added to the bill. Senior cards are honored.