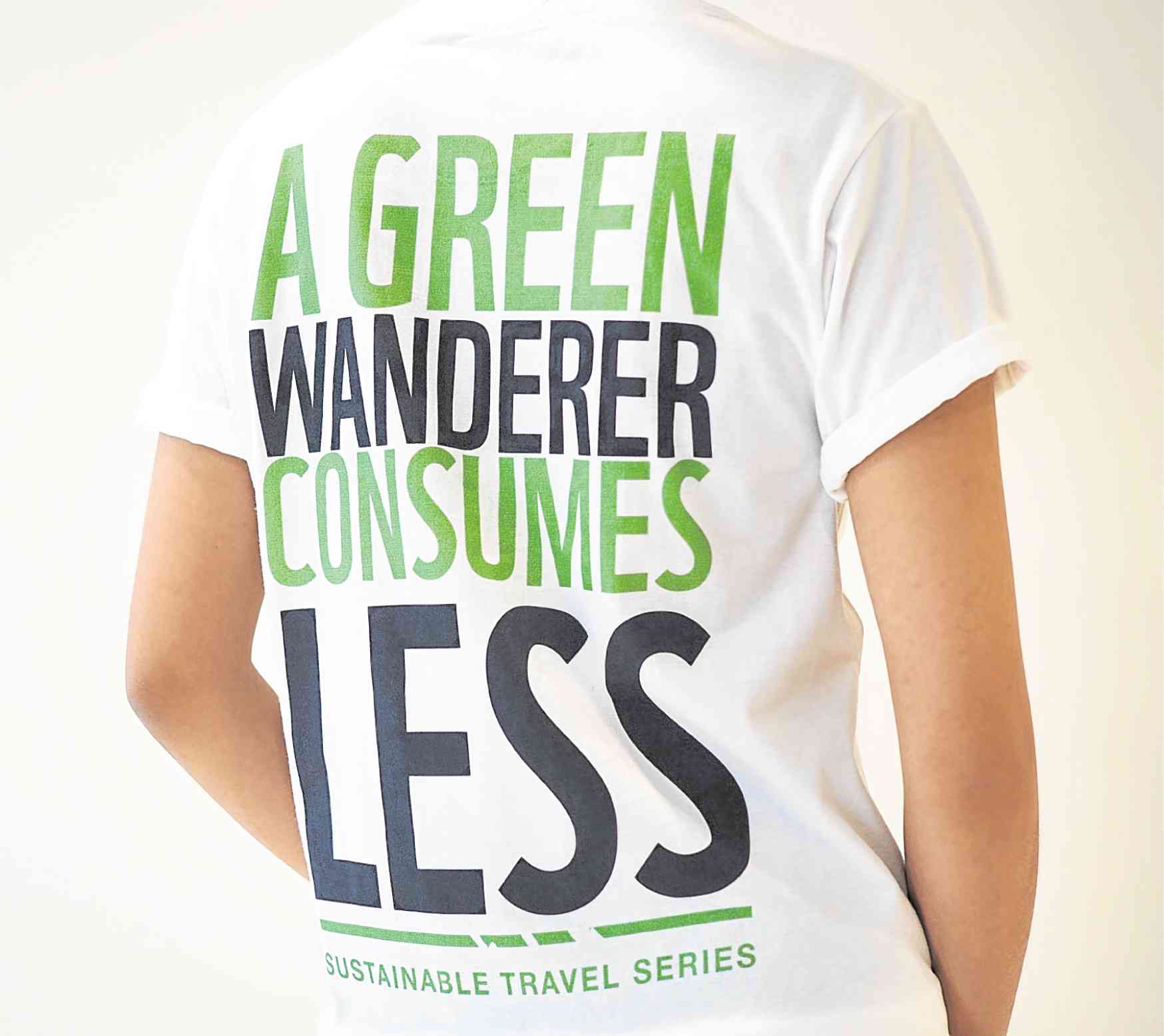 Green Wanderer mechandise like this shirt will be sold in the travel fair. —PHOTOS COURTESY OF WWF PHILIPPINES

Travel and tourism is one of the biggest industries in the world, contributing about 9 percent to the global GDP. In recent years, travel has also become one of the biggest joys of Filipinos, young and old alike, with the advent of budget airlines and other affordable travel options.

The way people travel, however, has had great impact on the environment and the visited communities. Does that mean people ought to park their suitcases and never leave their yards altogether?

While that might seem like the obvious answer, World Wide Fund for Nature (WWF) Philippines president and CEO Joel Palma says it’s actually otherwise. “The benefits from the travel industry are so vast a scale that we cannot afford this industry to fail.”

Palma cites the concept of “sustainable travel,” which can create positive impact on both the ecosystem and communities.

“Sustainable travel has three parameters: to protect nature; to give benefits to the community; and to provide visitor satisfaction,” he says.
“Tourism can actually help [the environment]. For instance, there’s Bohol, which has no major extraction industry. Its major industry is tourism and it’s sustainable. Travel and tourism is good as long as it’s managed.”

Green Wanderer is the idea of Nikki Huang, 17, daughter of SSI Group president Anton T. Huang, who’s the youngest of WWF’s eight-member NYC. NYC was formed a year ago to create a youth arm for WWF Philippines, on the behest of WWF Philippines board chair Gigi Montinola.

WWF is a global nongovernment organization whose main thrust is eco-conservation. The Philippines is one of only two WWF countries with a youth council. The eight chosen members—three each from private and public schools, and two from social media applications—are aged 16-24.

“We decided that sustainable living would be the most appropriate thing to discuss with the youth… Sustainable living is very important as it impacts every aspect of our lives—the food we eat, the way we commute, just the choices we make every single day. Every decision, big or small, makes a ripple effect. We want to build a nation that’s very knowledgeable about sustainable living and how to make it actionable.”

In relating that topic to travel, Cancio adds: “There are lot of things people don’t understand when it comes to tourism. They don’t realize that when they participate in a certain activity in tourism, it could impact the ecosystem and the community they visit. We’re looking at ways on how to improve that. We need to be educated on what sustainable travel is about, whether on one’s daily commute or when you take a vacation.”

Green Wanderer will bring together under one roof tourism suppliers that offer sustainable travel packages, some with activities that would allow travelers to participate in the communities they visit, like coastal cleanup.

“When Nikki expressed a desire to join WWF, I was happy to hear that, especially when she was accepted,” Huang says of his daughter, who’s a high school senior. “From a business perspective, the awareness level has become more and more important in the retail world today, not just in terms of creating awareness from a marketing perspective but in actual practice. We’re naturally benefiting from that as well, from an awareness standpoint. We’re made to follow suit locally as the local partners [of the global brands].”

Huang adds, “The actual impact on the tourism industry here is that, the biggest component is our islands. And with rising sea levels, it will affect the potential of businesses moving forward. From a community development standpoint, what El Nido has done in terms of creating actual benefits to the surrounding communities, and their efforts in making their environment sustainable [by providing employment opportunities], is highly commendable.”

Palma notes that the Philippines is the third biggest source of ocean trash in the world after China and Indonesia, and even just the way we consume things could create positive impact on the environment. He urges Filipinos to quit using single-use plastics, like plastic water bottles and drinking straws.

“We have one of the longest coastlines and the issue of
single-use plastics is enormous,” Palma says. “Some experts say if we don’t do something about the way we use plastic, there will be more plastic in the oceans than fish in 2050.

“Go for reusable bottles,” he adds. “Small things mean a lot. It’s about changing behaviors. It starts from one, two tourists. We can behave better.”

“Be more mindful of the way you live,” Cancio adds. “Every time you buy a specific product or support a certain brand, think about how it was produced, who produced them, were the employees paid properly, think of it in those terms and think if you really need that purchase…

“We’re trying to understand our audience, and the frustration of young people is that we know what the issues are, that the environment is being degraded, we’re abusing it, there’s so much poverty. But how do we address them? They’re all interconnected. They want to help out, but they just don’t know how. They need a venue for that. We create activities like Green Wanderer to allow them to participate and help proliferate the idea that sustainable living is the way to go. We want to make people curious, to keep asking questions.”

In the travel fair, activities will include a film showing by National Geographic, a food tasting and cooking demo, and a photo exhibit by underwater photographer Scott “Gutsy” Tuason. There will also be specially made Green Wanderer merchandise, including from the Central Square brands like Kate Spade and Michael Kors, SSI marketing communications manager Mitch Suarez says.

There will also be talks featuring environment experts and tourism personalities, including WWF youth ambassador and actress Janine Gutierrez.

The environment issue, Cancio says, is not a matter of reversing but lowering the impact.

Palma adds, “As you grow the GDP, you also grow carbon emissions. For the last two years, carbon emissions have plateaued, yet the economy is still growing. A factor there is technology—we have renewable energy… There’s hope. They say 2014, 2015, 2016 were the warmest ever globally. Now they’re saying 2017 might be the second warmest, no longer the warmest, so there’s a glimmer of hope.”

Cancio says her generation blames their elders for what has happened to the environment. “But there’s no point in crying. We’re not excluding other generations from participating. We all have to play a part.”