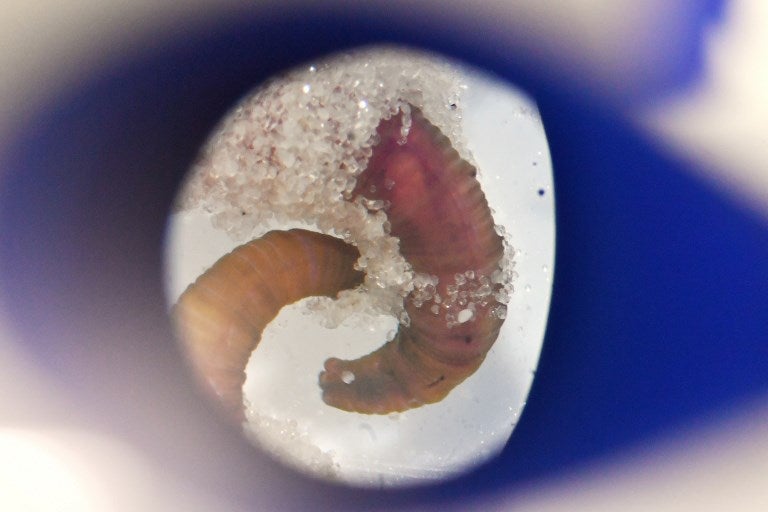 A picture taken through a microscope shows a marine worm and grains of sand on June 8, 2017 at the Aquastream company in Ploemeur, western France. These marine worms stock 40 percent more oxygen than human haemoglobin and could be used in surgery. / AFP PHOTO / LOIC VENANCE

For centuries, the only use humans found for the lugworm — dark pink, slimy and inedible — was on the end of a fish hook.

But the invertebrates’ unappreciated status is about to change.

Their blood, say French researchers, has an extraordinary ability to load up with life-giving oxygen.

Harnessing it for human needs could transform medicine, providing a blood substitute that could save lives, speed recovery after surgery and help transplant patients, they say.

“The hemoglobin of the lugworm can transport 40 times more oxygen from the lungs to tissues than human hemoglobin,” says Gregory Raymond, a biologist at Aquastream, a fish-farming facility on the Brittany coastline.

“It also has the advantage of being compatible with all blood types.”

Raymond and his team, which specializes in fish egg production, joined forces with biotech firm Hemarina in 2015 in the hope of securing a reliable means of lugworm production.

The facility now churns out more than 1.3 million of the creatures each year, each providing tiny amounts of the precious hemoglobin.

“We started basically from zero. Since the worm had never been studied, all parameters needed inventing from scratch, from feeding to water temperature,” says project researcher Gwen Herault.

Medical interest in the lugworm — Arenicola marina — dates back to 2003, when the outbreak of mad-cow disease in Europe and the worldwide HIV epidemic began to affect blood supplies.

The problem was that animal haemoglobins, as a substitute for the human equivalent, can cause allergic reaction, potentially damaging the kidneys.

In lugworms, though, hemoglobin dissolves in the blood and is not contained within red blood cells as in humans — in other words, blood type is not an issue — and its structure is almost the same as human hemoglobin.

In 2006, the worm’s potential was validated in a major study.

Scientists at Roscoff, close to Plomeur, extracted and purified hemoglobin from local-caught lugworms and tested it on lab mice. The rodents were fine and showed no sign of the immune response that dogged other animal substitutes.

If proven safe for humans, the researchers said, the worms’ oxygen-rich blood could tackle septic shock — a crash in blood pressure that can cause fatal multiple organ failure — and help to conserve organs for transplantation.

The secrets of lugworm hemoglobin lie in its ability to survive in extreme conditions, burrowing into sand at the edges of the tide.

The worm grows to about 25 centimeters (10 inches) in length and has several bushy external gills along its body.

At high tide, submerged in water, the worm builds up stocks of oxygen that, astonishingly, allow it to survive more than eight hours out of the water at low tide.

Anyone who has walked along a sandy beach at low tide will see evidence of lugworms, from the tiny coiled casts of sand they throw up from their burrow, 10 cms below the surface.

But, apart from anglers who dig up the creatures for bait, lugworms are rarely seen — and breeding them is a novel challenge.

“The main difficulty is working with a small animal that lives its life hidden,” explained Raymond.

Aquastream struggled at first with basic rearing problems — including how to tell a male lugworm from a female.

After nine months of testing, “50 percent of adult worms survived and a good deal of them produced eggs,” said Herault.

The larvae start out around 1mm in length and the worms are transported to Hemarina’s testing site once they reach 5mm.

Aquastream director Nathalie Le Rouilly said that her firm’s collaboration with Hemarina could provide the world of medical science with a sustainable supply of the worms.

“There is nowhere else in France or the world that has the capacity to produce lugworms in a controlled environment to ensure a supply of their haemoglobin,” she says.

Scientists are excited by the potential of lugworm haemoglobin — although they also point to a rigorous testing procedure before the molecule can be certified as safe and effective for humans.

If this vision turns real, lugworm blood may also allow donor organs to live longer outside the bodies, potentially helping thousands of recipients each year.

And, one day, freeze-dried lugworm blood could be a crucial backup for standard blood supplies — a boon in combat zones or disasters.