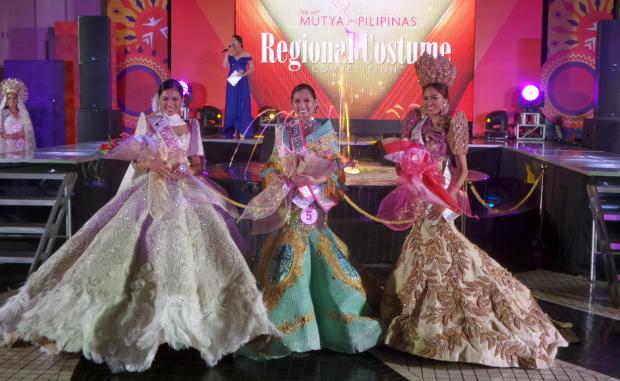 Mutya ng Camarines Sur Crystal Rosehelly Alday bested 29 other aspirants for the “Best in Regional Costume” award with a colorful Maria Clara number designed by Louis Pangilinan in a special preliminary competition held at The Plaza of Resorts World Manila in Pasay City on July 27.

Alday completed the look with an ornate rosary dangling from her hand.

Pangilinan also designed the gown worn by second place winner Alyssa Joreen Reyes from Lemery, Batangas. The embroidered white Filipiniana terno had an oversized ball skirt, and was accentuated by plumage as accessories for the hair.

Mutya ng Southern Luzon Nicole Kristel Losloso rounded up the Top 3 with her embellished Filipiniana terno with an intricate head piece. The costume was designed by Jojo Alidio.

The 49th Mutya ng Pilipinas pageant will hold its coronation night at the Newport Performing Arts Theater of Resorts World Manila in Pasay City on Aug. 4.

The ceremonies will be telecast on ABS-CBN on Aug. 6 before “Asap.”

The Philippine Daily Inquirer is a media partner of the pageant. /atm