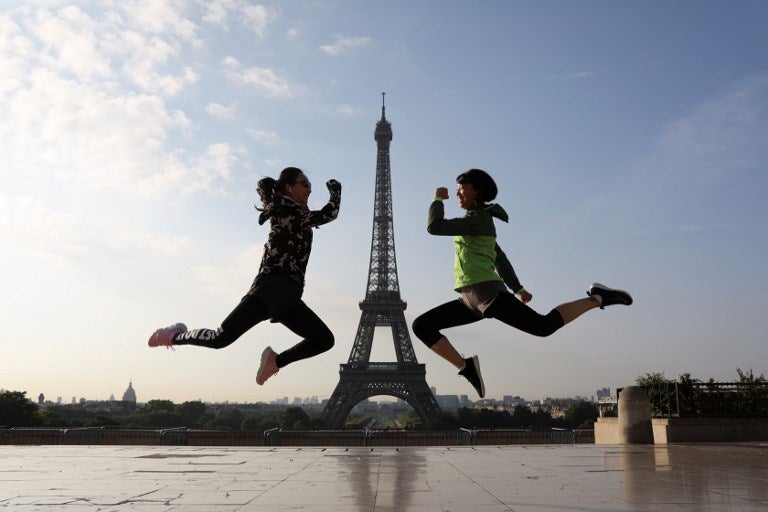 Two young Asian women jump simultaneously for a souvenir picture near the Eiffel Tower at the Palais de Chaillot on early July 26, 2017 in Paris. AFP PHOTO

The United States came second followed closely by Spain, according to annual figures that the Madrid-based UNWTO normally announces in January, but which were delayed this year.

But although France stayed on top by welcoming 82.6 million visitors in 2016, that was a more than two percent drop from the previous year, the figures showed.

Repeated terror attacks had sparked concerns that tourism would drop substantially in France, known especially for its gastronomy and wine but the data indicated most visitors have not been put off.

READ: Paris tourist arrivals down due to terror, but France is still world’s no. 1 destination

The number of tourists visiting the US was also down, falling three percent to 75.61 million, which saw the country narrowly maintain its second position as Spain experienced a 10 percent jump in visitors to 75.56 million.

The latter’s tourism industry has boomed partly because people who normally go to Turkey, Egypt or north Africa for their holidays are instead deciding to chase the sun in Spain, citing fears of unrest.

China came fourth in the ranking with just under 60 million visitors and Italy came fifth — the same as in 2015.

The classification is calculated according to the number of visitors who spend at least one night in a country.

But if the money earned from tourists is taken into account, the United States came a resounding first with $206 billion (173 billion euros) made in 2016, the UNWTO said.

Spain came second with around $60 billion — another rise compared to 2015 — followed by Thailand and China.

Britain, meanwhile, fell from third to seventh place at $34 billion due in part to the depreciation of the pound compared to the dollar after the Brexit vote to leave the European Union, added the UNWTO.