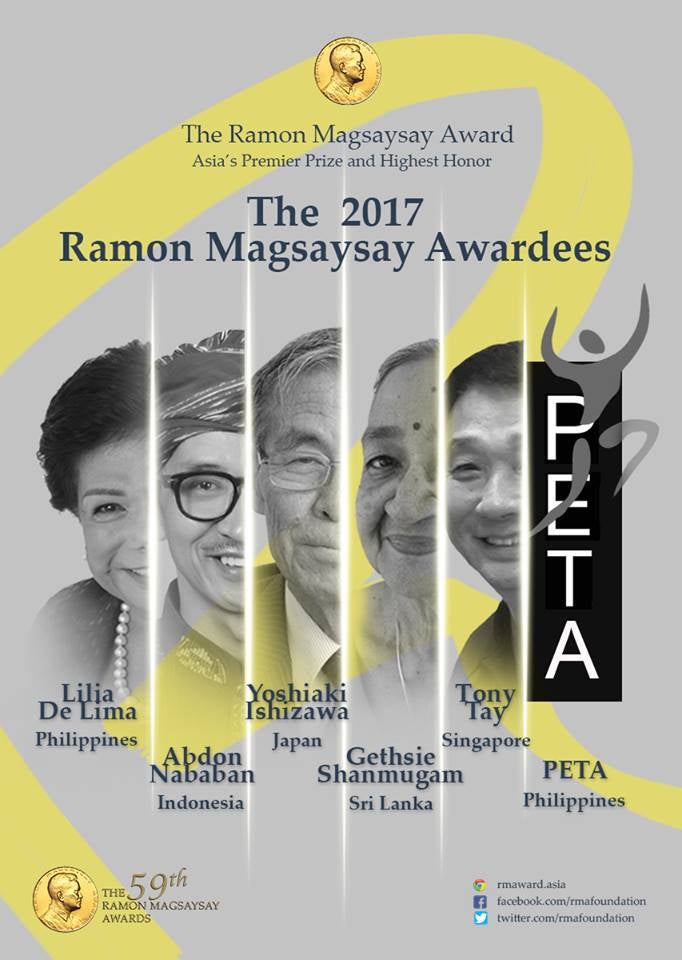 How Peta won the Ramon Magsaysay Award: The inside story 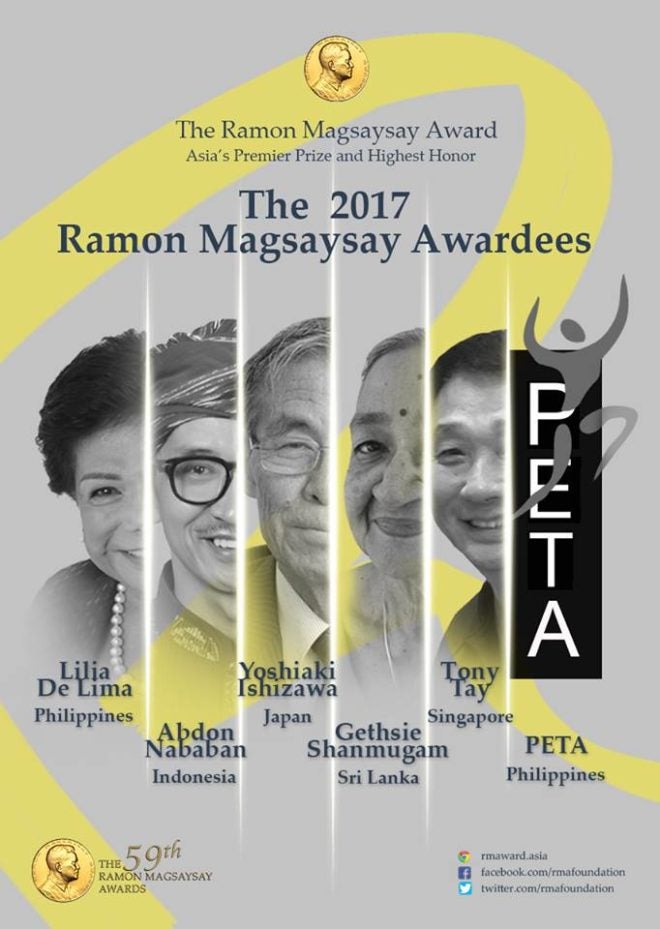 I attribute my sociopolitical awakening partly to the Philippine Educational Theater Association (Peta). It was when I, with some classmates from Ateneo de Manila, went to Intramuros to watch “Macli-ing,” a play directed by Soxie Topacio. Nanding Josef was Macli-ing Dulag, a Cordillera village elder who was murdered by government soldiers in 1980 for leading the struggle against the construction of the Chico Dam, which would have submerged the sacred lands of indigenous peoples in the Cordillera region.

My next Peta experience took place in 1993 when 20 Development Academy of the Philippines (DAP) program officers, including me, attended an intensive one-week Training of Trainers on Gender Sensitivity conducted by Peta mentors Ernie Cloma, Bing Magtoto and Beng Santos (now Cabangon).

It was because of these experiences with Peta that I readily said yes to the invitation of the Ramon Magsaysay Award Foundation (RMAF) to write an investigative report on the theater group as one of this year’s nominees for the prestigious award.

My primary task as investigator was to look into and report on Peta’s accomplishments that would justify its nomination. Though it was very challenging and arduous, I admired RMAF’s creative ways of gathering data without the nominees and key informants knowing about the nomination.

To ensure the integrity of the data-gathering process and to avoid any lobbying, all RMAF investigations are done undercover.

I presented myself to Peta as a contributing writer who wanted to write about its 50th anniversary, which it celebrated last April. My secret two-month field research took me to various Peta engagement sites such as Tacloban and Palo in Leyte, and Tagbilaran in Bohol. Additional data came from interviews with Peta partners in Battambang, Cambodia.

All in all, 20 key informants (i.e., stakeholders, subject specialists, beneficiaries and the nominee) were interviewed. Numerous scholarly studies, feature articles and other primary and secondary documents about the theater group were also reviewed.

One accomplishment that reflects the greatness of spirit that the RM Award looks for in its nominees is Peta’s consistent promotion of Filipino cultural identity amid increasing global cultural hegemony. Since its establishment on April 7, 1967, this plucky theater company has continued to create original Filipino plays—540 productions to date.

Through these productions, Peta is able to reach out to a wider Filipino audience and make theater accessible to Filipinos. “In this way,” said Maribel Legarda, artistic director, “Peta succeeds in its objectives of entertaining and educating.”

Through the decades, Peta has also nurtured the innate creativity, youthful idealism, nationalist sensibilities and sense of social responsibility of thousands of Filipino youth, many of whom have become pillars of Philippine culture and arts. These include the likes of Lino Brocka, Nonon Padilla, Lutgardo Labad, Soxie Topacio, Joel Lamangan, Chris Millado, Orlando Nadres, Nanding Josef, Brenda Fajardo and Rody Vera.

Peta members like them undergo rigorous, methodical training to become not only persuasive artists or performers, but also skilled and committed artist-teachers. As Beng Santos-Cabangon, executive director, explained, “Peta members are teachers, too. Whatever (it is) that they are able to do, they should be able to teach it to others, both artists and non-artists alike.”

Peta’s brand of national theater immersed in current social realities has yielded thought-provoking original Filipino plays laden with critical social commentary. “Theater should be able, at the very least, to make your audience think,” said Cabangon. “Maybe, it will prompt them to do something, or maybe not. But at the very least, we make people think.”

On top of its regular theater season productions, Peta also produces mobile theater productions to reach out, educate and enlighten communities in the regions.

It has also helped to organize more than 300 communities in various regions. Its Basic Integrated Theater Arts Workshops (Bitaw) have benefited not only performing artists but also school teachers, community leaders and development workers in various spheres of influence and engagement. From 2006-2016 alone, Peta has trained 4,650 participants.

Its psychosocial debrief and support program has likewise helped residents displaced by the 1991 Pinatubo eruption, children in areas of armed conflict, and communities affected by the Bohol earthquake and Supertyphoon “Yolanda” (Haiyan) in Leyte in 2013.

Lest we forget, Peta also courageously lived out the role of “theater as agent of conscientization” during the martial law years, a time when it was dangerous to do so.

It continues to take a critical and timely position on Philippine sociopolitical realities by tackling various social concerns—issues of workers’ rights, peasants’ rights, the plight of indigenous communities, the right to safety, the rights of women and children, lesbian, gay, bisexual and transgender rights and the plight of overseas Filipino workers; along with other issues such as environmental degradation, corruption, climate change, voter’s education, the power of social media and historical revisionism.

Peta has continuously been tapped to implement important advocacy projects because of its established track record. Through the Great Mekong Subregion Partnership Program (2005-2010), for example, it helped build the social advocacy and mobilization capacities of its cultural creative partners in Cambodia, China’s Yunnan province, Lao People’s Democratic Republic, Myanmar, Thailand and Vietnam.

For all of these, Peta, with five other outstanding leaders in Asia, was recently elected by RMAF to receive the 2017 Ramon Magsaysay Award, the Foundation hailing it for “its bold, collective contributions in shaping the theater arts as a force for social change, its impassioned, unwavering work in empowering communities in the Philippines, and the shining example it has set as one of the leading organizations of its kind in Asia.” —CONTRIBUTED

Theody Demaisip was the lead researcher on the Peta nomination for the 2017 Ramon Magsaysay Award.