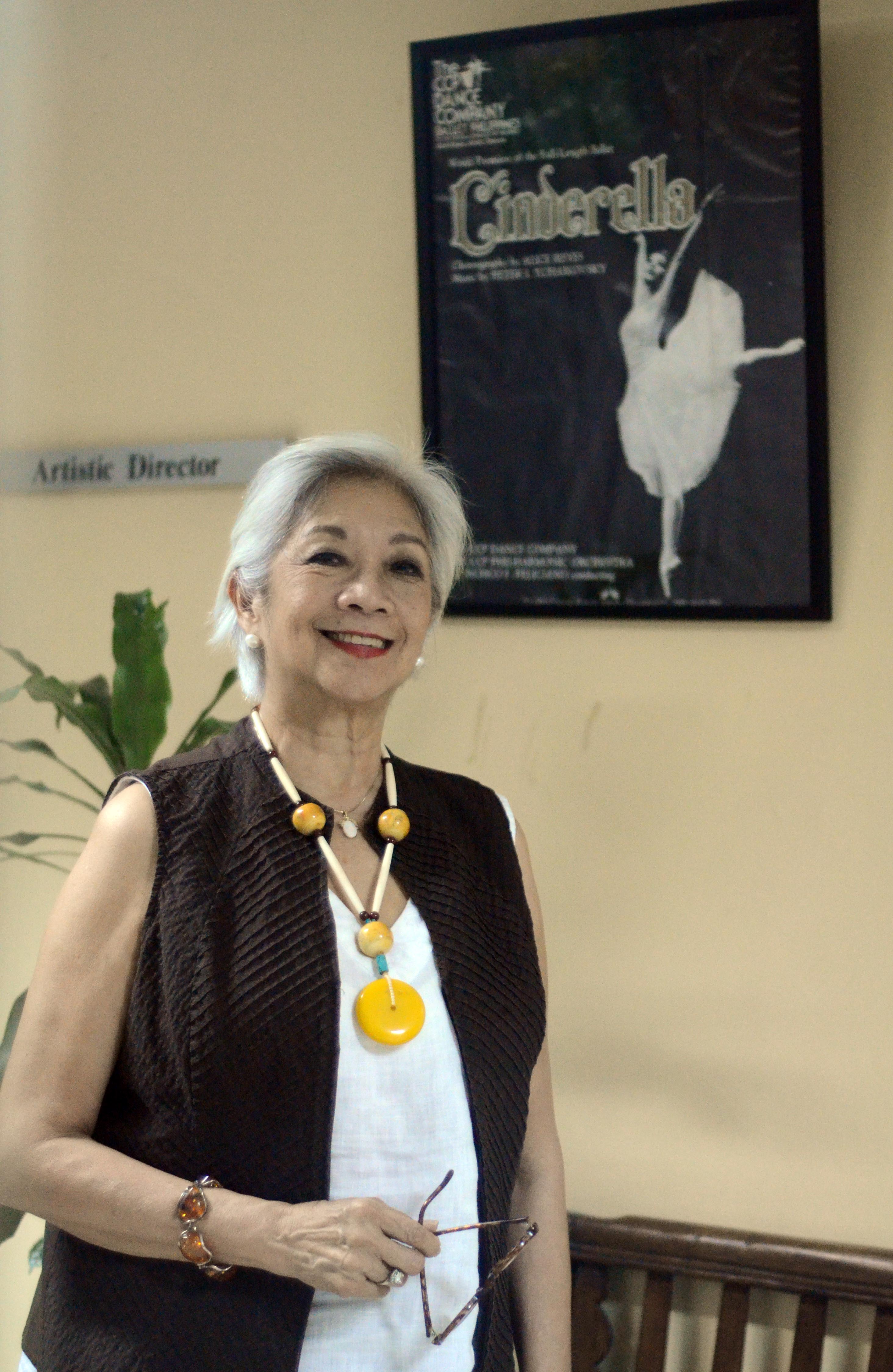 Alice Reyes, back at Ballet Philippines, reintroduces company classics to ‘a new audience’

In the run-up to its golden anniversary in 2019, Ballet Philippines (BP) wants to bring the company’s classics “to a new audience.”

Alice Reyes, BP artistic director emerita, calls her plan “reaching out to as many levels of society” while performing anew the works that made the company the preeminent classical and contemporary dance company that it is now.

The fun starts on Aug. 18 with “A Gala Celebration,” an anthology of choreographic gems “handpicked to showcase the excellence at the company’s core,” including Agnes Locsin’s “Salome”; Bam Damian’s “Minamahal, Sinasamba”; Edna Vida’s “Vision of Fire”; Norman Walker’s “Summer’s End”; and an excerpt from the classical piece “Raymonda.”

BP said the gala that runs until Aug. 20 also “marks the return of Alice Reyes… as the company’s artistic director.” Reyes shuttles between Manila and New York where, in her own words, her “guapito grandson” resides.

Fans, of course, know the story why Reyes, named National Artist for Dance in 2014 by President Benigno Aquino III, left after her initial stint as founder and artistic director of the company in its first 20 years.

“I got married to this lovely gorgeous man (but) we did not discuss where we were going to live,” she said. So Reyes would fly to California to see (husband Ted Van Doorn), or he would come to Manila to be with her.

Ted eventually told Reyes the frequent flying “is not what I signed up for,” something she took as her cue to hang the ballet shoes up, albeit temporarily.

“I actually made sure the company could survive, so I stayed on to kind of monitor and guide and mentor, so the company went on and on and on,” she recalled.

Reyes used her married name Alicia Van Doorn when credited for efforts while officially on hiatus as artistic director. She returned to using her maiden surname only after the National Artist accolade.

BP’s reprise of its earlier hits is also meant to speak of how the company started as the fledgling troupe Reyes put up in 1969 (the Alice Reyes Modern Dance Company). This was right after she finished her masters in dance scholarship at the Sarah Lawrence College.

Reyes recalled being in Manila and gearing up for another flight to the United States when she noticed the newly-built Cultural Center of the Philippines (CCP). Reyes approached CCP artistic director Lucresia Kasilag to ask whether Kasilag would agree to Reyes putting up “a modern dance workshop.”

After convincing the CCP honcho, Reyes wasted no time asking cofounder Eddie Elejar to invite dancers to join them. Elejar is also recognized as a founder of BP.

Traveling the world as the CCP Dance Company, Reyes and her group wowed audiences in Australia, London, Russia, Germany and all over Asia.

“The reviews we brought back spoke very, very highly… Here is a company from this little country somewhere in Asia that could do such an amazing array of dances based on very strong technique and really good geographic pieces,” Reyes said.

That time, Reyes was still part of the Bayanihan Dance Troupe. “We continued what Bayanihan did. Beautiful dances, women, men, costumes. We really killed the world when we first came out. Carrying on the tradition of reintroducing the Philippines as a country so blessed with talent, musicality and culture. That was what the CCP Dance Troupe went out and did,” she said.

“Only, we introduced this repertoire that put us on equal basis as the other companies that did something similar, but maybe more Germanic or American in their thrust. We were quite Filipino and Spanish and we did some American. That was the thrust, and now I want to reintroduce those pieces,” Reyes added.

Other productions lined up are Edna Vida’s “The Nutcracker,” set for the holiday season; and “Don Quixote,” in the first quarter of 2018.

Reyes obviously prides herself in creating a professional dance company that was the first of its kind to offer regular salaries to its artists.

“For the longest time, dancers worked as bankers, managers, secretaries, bank tellers. They had daytime jobs and after that they’d rush over and take classes and rehearse,” she recalled.

Reyes changed all that. “We decided to make it possible for somebody who was talented enough and wanted to work full-time as a dancer, just like they do in Europe, the United States and all over,” she said.

The artists were paid using dues given by subscribers. “I would promise the dancers I could (only) pay them for so many months. That was how it started. I always believe in starting small and very realistically so you don’t overpromise,” she explained.

The plan worked. BP president Margie Moran Floirendo said the company now has 60 professional staff and dancers “on a permanent employment status,” which means they are paid 12 months a year plus 13th-month bonus.

Back in the day, famed architect Leandro Locsin did not design the CCP’s rehearsal halls for dancing. The one used by ballerinas was meant for a philharmonic orchestra. Reyes had it renovated to make it more suitable for ballet practice. Kasilag and Don Jaime Zobel de Ayala, then president of the CCP board, gave all-out support.

The dance workshops began soon after. Not just ballet productions but also pop, folk and rock.

“In the Philippines, you always have classical ballet purists. You don’t cross that out, but I managed to put in modern dance which appealed to the more educational, intellectual, makabayan kind of individuals,” Reyes pointed out.

“I had theater people, musical collaborators. That was fun. That was like a testing time. I rode on the popularity of the ‘who’ but I also [needed to] like the story. I went into ‘Tales of the Manuvu’—mythology, but also in the genre of pop-rock opera. It brought in new markets, audiences. That was one way of us growing the market,” she added.

Among the productions that fans remember most are classics like “Cinderella” and “Romeo and Juliet”; Filipino modern works such as “Amada,” “Itim-Asu,” “Bayanihan Remembered,” “Mga Babae” and “Rama Hari.” Reyes counts “almost 500 choreographic works.”

“Paul staged a lot of our dance works. Paul greatly admired the legacy of the company so he did bring back a lot of the major works, minor works. There is continuity,” she said.

In reaching out to newer audiences, Reyes mentioned traffic and online streaming among the challenges that BP faces today. She blames traffic for discouraging many of BP’s subscribers from watching the shows.

“We still have the highest participatory audiences among all major resident companies (in CCP). But (traffic) is a fact, we are trying to deal with that. We try to do move-overs so we could service those who cannot come. That is one thing we are looking into,” she said.

But while the internet affects viewership of the company’s performances, BP president Floirendo noted that social media also helps in advertising and dissemination of feedback.

The recent production of “Swan Lake,” for example, sold a lot of tickets through social media and “word of mouth,” she said. “It’s cheaper than advertising in the newspaper. You can reach bigger crowds.”

One phenomenon worth taking notice is the exodus of young dancers lured by the promise of better pay from companies abroad. Reyes remembered how BP was “hit quite seriously” when Hong Kong Disneyland raided its stables a few years back.

She added that the company is “saddened” whenever a dancer leaves, and gave the assurance that a five-year plan that would put BP dancers’ salaries at par “with other industries” is in the works.