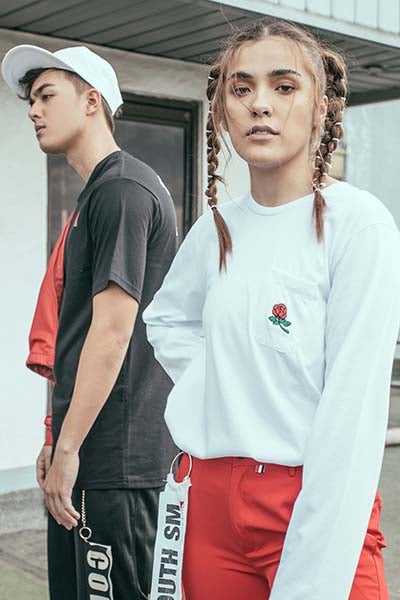 Lofgren and Kristensen had bright smiles even as the sun hid behind clouds on the day of this shoot. The two channeled fashion trends of the 1990s—actually their birth years—with modern twists of bomber jackets, vests and frills.

In the studio, blasting out was music also from the ’90s—Lofgren and Kristensen singing along and bobbing their heads to Backstreet Boys tunes.
“Although I used to dabble in modeling a few years back, SM Youth is really the beginning for me,” says Lofgren, a civil engineering major at De La Salle University-Dasmariñas.

Kristensen, a disciplinary business studies major from DLSU-Manila, also had modeling experience but considers herself a newbie. “I felt like I lost the momentum from my past stints,” she says. “I had to warm myself up again.”

Joining SM Youth Go-See was a journey that began when they saw the ads announcing the competition.

“I couldn’t sleep the night I saw it,” recalls Lofgren. “I thought it was interesting. For some reason, I felt like, if I really tried, I could be the next SM Youth Ambassador.”

“I realized, wow, this is like a dream job, being able to model clothes and, at the same time, inspiring the youth,” says Kristensen. “When I first saw the ad, I was kind of doubtful because it seemed like a farfetched dream. But then I thought there was nothing to lose. I decided to give it a shot.”

The experience went beyond the toughness of the competition, which included projecting themselves before the camera like professional models. More than anything, the winners valued the friendship and bond they formed among the finalists, ambassadors and the people behind SM Youth Go-See.

“It did not feel like a competition to me, because if you saw us off-cam, we helped each other overcome the challenges,” says Kristensen. “We were one big family even as we were competitors and only two won.”

Lofgren agrees: “After the first day, for some reason, we felt a connection. When not dealing with challenges, we were getting to know each other. I would bring my speakers and then play music, and we would end up singing or dancing. We would do random dance battles or just crack jokes.”

Kristensen swears it was heartwarming “to know that the most prized possession I gained in the whole competition was making friends, relationships that formed during the competition. It was authentic.”

She adds that everyone had skills and natural talent. “They were so good at what they do. They come from different backgrounds, different values and beliefs. I learned so much from them.”

Lofgren says he was truly stoked to inspire the youth: “Growing up, I was bullied and I saw the competition as an opportunity to inspire others who are going through what I went through, to show that you can do anything that you want, how you can achieve the dreams that you dream of, that it’s really possible if you just work hard and believe in yourself.”

Throughout the second season, it was evident how Lofgren’s optimism helped him hurdle the weekly challenges.

“I would continuously say to myself—keep on fighting for your dream, don’t let anyone drag you down,” he recounts. “Any dream is achievable and you can do it.”

Learning opportunity
Kristensen admits that like many young people today, she’s still discovering her strengths and weaknesses. “Mac and I have been getting the attention,” she says. “It’s a good thing because it’s an opportunity to grow and to learn more about ourselves. I’m starting to discover things I can actually do, which makes me a more self-aware person. It’s really an opportunity to develop skills and to welcome new opportunities.”

She believes that there are no specific qualities a “role model” must have. “Each one can be a role model in his or her own way. Throughout the competition, that’s what I’ve been trying to promote, to just be yourself. You never know that this trait that you have can inspire others, no matter how simple or weird that trait is.”

For Lofgren, being part of not just a brand but a family is the best thing about being an SM Youth Ambassador. “I’m glad I’m not just a part of the change, but also an instigator of that change. Hanging out with the SM Youth family, you can see that it sets trends, it inspires the youth. It really is for the youth, by the youth.” —CONTRIBUTED