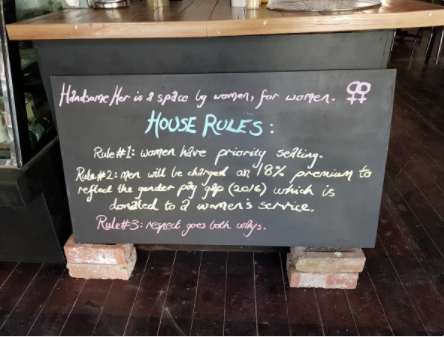 Would LOVE everyones thoughts on this. My friends cafe in #Brunswick, Handsom Her – is for women by women AND an has a 18% gender tax! pic.twitter.com/tVSX3PO4q8

Women all over the world have been preaching about the supposed “gender wage gap” where male workers get compensated better than their counterparts.

Owners of the Handsome Her, a café in Melbourne, Australia, aims to further raise awareness regarding the matter by charging its male patrons more.

The small coffee house, which describes itself as a “space for by women, for women, recently updated its  “house rules” blackboard, highlighting the gender pay gap.

“Men will be charged an 18 per cent premium to reflect the gender pay gap, which is donated to a women’s service,” the board reads.

Aside from more expensive lattes for men, they are also expected to give women priority seating, Mashable reported.

Meanwhile, café owner Alex O’Brien confirmed that the tax isn’t being imposed and is “voluntary.”

“Men are asked if they want to pay the charge before being charged,” she said. “It’s after all, meant to help raise money for women’s charities.“

The gender wage gap in Australia has been highlighted in the 2016 report “Australia’s Workplace Equality Agency”.

According to the statistics, full-time base salary for women in the country across all industries is 17.7 percent lower than men. Khristian Ibarrola