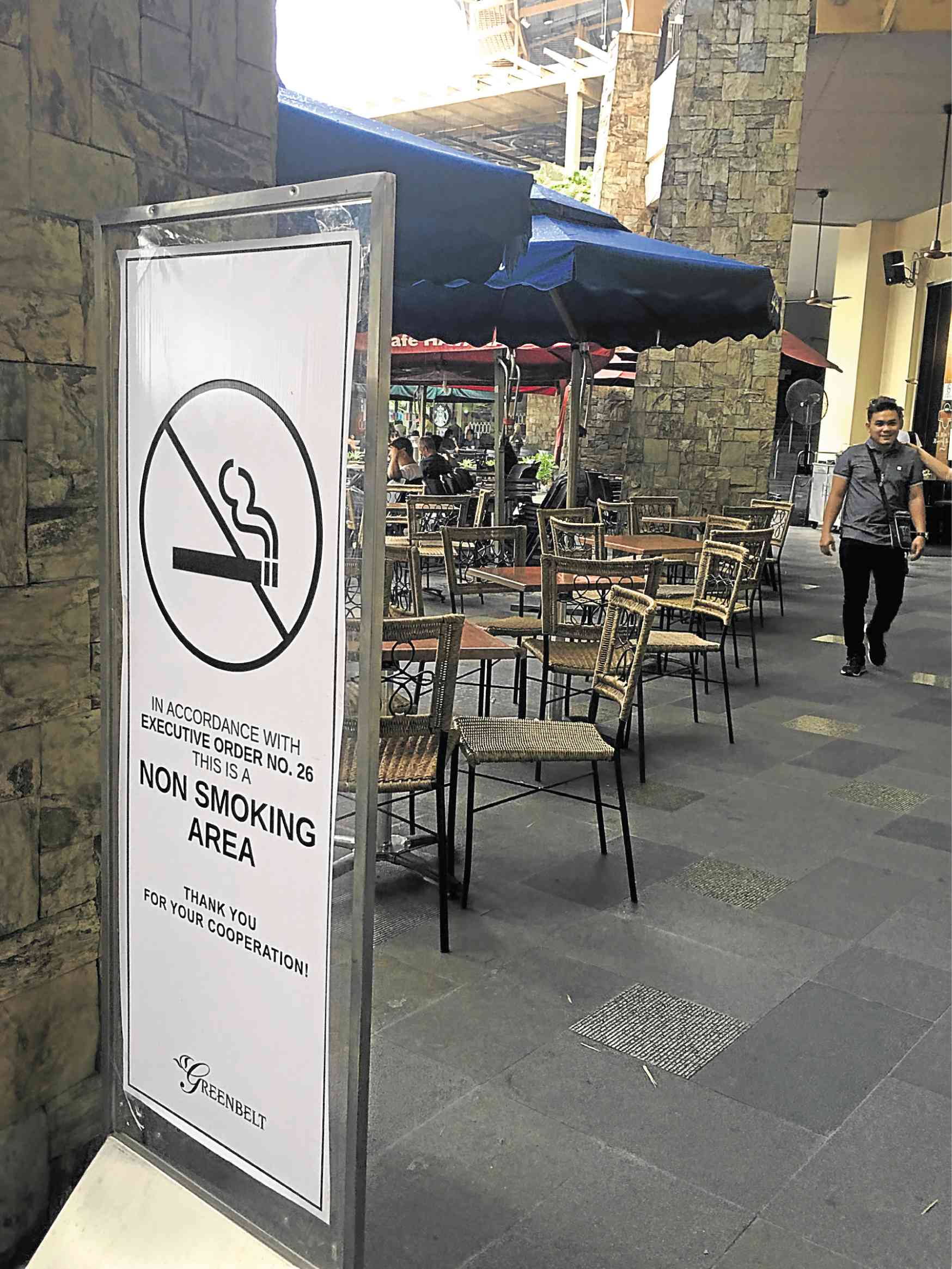 How’s business after the smoking ban?

Is the smoking ban saving lives but killing businesses?

It’s Friday, and instead of making her usual plans for after-work drinks with friends, Bianca (not her real name), a retail PR manager, is instead heading straight home.

“At least at home I can smoke,” she says with a laugh. The young executive, who lives in Bonifacio Global City, Taguig, was recently admonished by roving cops while crossing the street in her neighborhood. She had a lit cigarette in her hand. She was lucky she got only a warning.

Executive Order 26, the law that prohibits smoking in public and enclosed spaces, fines smokers up to P10,000. It took effect July 23. All establishments are now required by law to have “designated smoking areas” (DSA).

The al fresco dining spaces frequented by smoking patrons are now off-limits. The EO says DSAs must be at least 10 m from entrances, exits or areas where the public congregate.

“That means you smoke in the bushes,” another executive who works in Makati says.

At Greenbelt, which has rows of restaurants and cafés with al fresco areas, the outdoor seats are remarkably empty this Friday afternoon. Big, no-smoking signs are placed near the food outlets.

“We are getting both positive and not-so-positive feedback from our mallgoers,” says Joseph Reyes, AVP and head of Central & South malls for Ayala Malls, which owns Greenbelt.

“There are those who welcome the idea,” he adds. “And you can guess what the smokers are saying. Unfortunately, much as we empathize with the smokers, we have to make sure we are compliant with E.O. 26.”
Quite strict

One watering hole in the same mall no longer allows patrons to smoke even in its speakeasy behind the main bar. According to a waiter who declined to be named, the mall guards have been going around to make sure no establishments are thwarting the E.O. “Before that, we were okay with it, and it was hidden. But the mall has been quite strict.”

“We are closely coordinating with our landlords to identify outside DSAs we can direct our smoking customers to,” says a statement from Starbucks, which typically has outdoor seating for smokers in most of its outlets. “Inside our stores, we have removed all ashtrays and placed No Smoking signs.”

“The smoking ban has resulted in a few negative reactions from regular guests who are smokers, but there seems to be no significant effect on revenue,” says Guia Abuel, VP for operations of Italianni’s. “Maybe because majority of guests are non-smokers.”

Reyes says they have already identified specific areas in the various Ayala Malls to serve as DSAs. “We are in the process of getting approval from the local governments and, hopefully, we’ll be able to implement them soon… In coming up with the DSAs, we want to provide a space for smokers where they will not feel isolated or discriminated against.”

Abuel also says Italianni’s is considering putting up smoking rooms “where possible at existing stores, as well as future stores.” The smoking ban is nationwide.

However, Reyes says it’s still too soon to say if the smoking ban will negatively impact the bottom line of dining establishments.

“That is why we are closely monitoring the performance of merchants,” he adds.

As for patrons like Bianca, “If you want to smoke now, you don’t go out. You can no longer do it in the clubs, bars and cafés,” she says.

In another Makati mall, she has experienced huddling with other smokers in a tiny corner, behind bushes, on an incline platform—the mall’s only DSA. The E.O. states that “no building or conveyance shall have more than one DSA.”

“I think I really should consider quitting smoking,” she says.