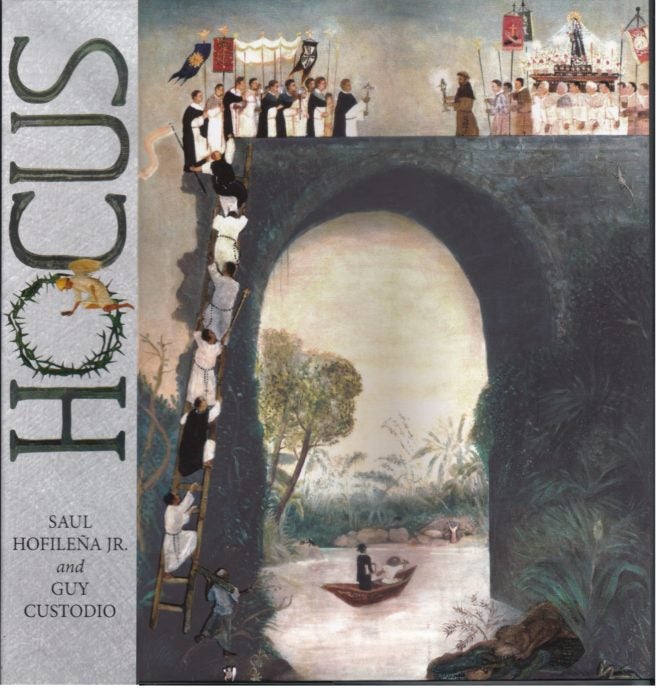 Saul Hofilena Jr. is a lawyer who specializes on international law and is, as well, a historian who has written the acclaimed “Under the Stocks,” a book with an unconventional approach to Philippine history.

Guy Custodio is a visual artist who lived for many years in Spain, restored religious Spanish art and later in Bohol restored heritage churches.

The two live near each other and for several years Hofileña visited Custodio’s atelier with a grand project in mind. “He explained what he wanted to do,” recalled the artist. “Often he would bring pictures from his vast collection of old books of the Spanish period and American era.”

Custodio added, “in other words he wanted the truth of the past to be shown graphically in our collaborative work.”

So the artist created new works based on the material, capturing the feel of the 300-year-old Spanish era and approximating the paintings and prints of the colonial past, but in a modern way. And the historian wrote the text, specifically the caption stories explaining each painting.

“The paints tell our story as a people, why we are who we are,” Hofileña says. “Some of the paintings are based on historical facts, a few ere dictated by fancy but still subject to the realities of history.”

The results are “Hocus” (Hofileña-Custodio), a landmark exhibit ongoing at the National Museum of the Philippines in Manila until Oct. 29 and a deluxe volume of the same title (Baybayin Publishing, 2017) which has just been published.

The title of many works are in Spanish but with English translation. Some examples are “La Pesadilla” (The Nightmare); “La Virgen en un Rincon de Cavite” (The Virgin in a Corner of Cavite); and “Dios esta esperando” (God is Waiting.)

Custodio is at home whether depicting of figures and images at close range, intimately, or on a grandiose scale, with massed humanity, pilgrims, soldiers with shields and lances, and avenging angels.

Hofileña declared: “The Sword and Cross—the formidable union of Church and State—conquered these islands. Through the centuries the sword weakened as the vestiges of the colonial State withered away, but not the Cross. To this day, throughout the archipelago, there are Roman Catholic churches. Though battered and worn, their spiritual power remains.”

This is the main point of the book, and may well be its theme

“Hocus” is a fascinating journey through our past—brief concise stories complemented by paintings real as well as surreal. It is a record of a passage—nonlinear, selective, episodic—through our religious heritage.–CONTRIBUTED