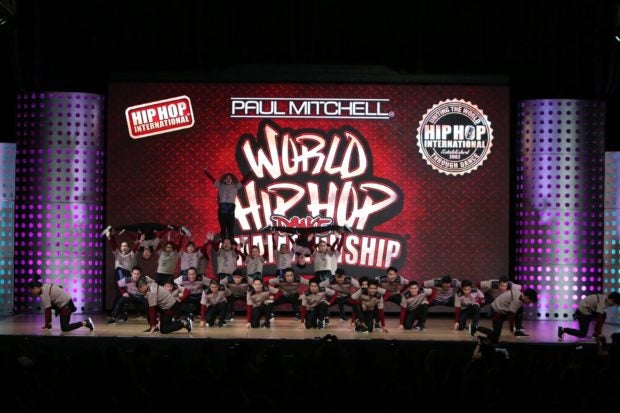 The teams ranked in the top five under the Megacrew Division, which requires 15 to 40 dancers onstage.

Defending champion UPeepz retained their crown, which appeared to be at risk when it placed second in the semi-finals.

The team served another sharp and seamless performance with daring stunts that have made it a crowd favorite worldwide.

IN FIRST PLACE IN THE MEGACREW DIVISION
UPeepz – Philippines pic.twitter.com/JMCQcWQlsb

All teams have had previous experiences in the competition: Legit Status won silver in the Varsity Team Division in 2015, while The Alliance’s Varsity team bagged a bronze in 2016.

Under the Varsity Division, which requires five to nine members, Pinoy teams Kingsmen and Legit Status made it to the finals. Lil’ Peepz, composed of UPeepz’s younger members, made it to the grand finals of the Junior Division, where dancers are between 7 to 12 years old.

The country sent its largest delegations of dancers yet this year. According to Hip Hop International Philippines, 230 dancers made their way to Phoenix, Arizona to compete in various divisions. JB