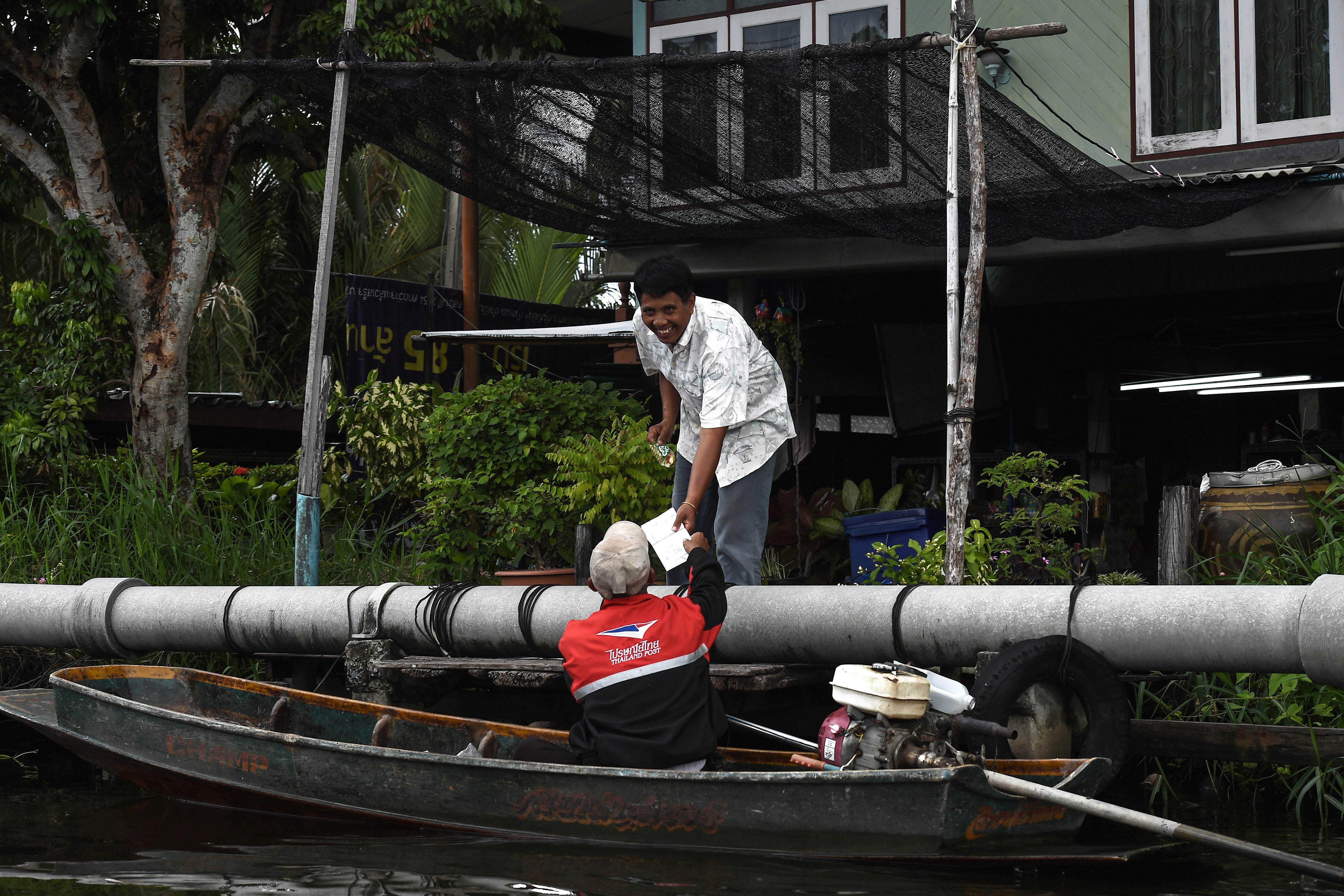 This photo taken on July 17, 2017 shows postman Nopadol Choihirun (bottom) delivering mail by boat in the Bang Khun Thian district on the outskirts of Bangkok. Nopadol Choihirun is one of Bangkok's last remaining postmen to deliver mail by boat to waterfront homes in low-lying parts of the capital. / AFP PHOTO / Lillian SUWANRUMPHA / TO GO WITH Thailand-lifestyle by Sippachai KUNNUWONG

Revving up his engine as the monsoon clouds begin to open, Nopadol Choihirun steers his weathered boat under a two-lane bridge to keep his pile of envelopes and parcels dry.

Dodging the downpour is a regular challenge for the 55-year-old, one of Bangkok’s last remaining postmen to deliver mail by boat to waterfront homes in low-lying parts of the capital.

“I have to be really careful to watch the clouds,” he said from beneath the shelter of the bridge, munching on a banana as the droplets began to fall.

The genial postman criss-crosses the swampy canal in Bang Khun Thian district twice a week. Residents know their mail has arrived by the sound of his rusty engine — and the barking it provokes from the suburb’s dogs.

Drift wood and trash that often get stuck in the boat propeller make the job a daily adventure.

But Nopadal says the work is about more than just handing out goods.

“This is better than sitting at the office or riding the bikes. I meet with the people and interact with them more,” he told AFP as he called out to waterfront residents while steering his boat.

A veteran mailman who switched to the boat service five years ago, Nopadol is taken with the languorous charm of Thailand’s canal life.

“Some villagers invite me in for lunch or try to offer me a glass or a bottle of water. This is the charm of my job and it makes me happy,” he said.

Yet the profession is increasingly threatened by booming development in Bangkok’s sprawling metropolis, with canals paved over and waterfront homes torn down.

Venice of the East

With an extensive network of moats and man-made canals, Bangkok is often dubbed the “Venice of the East”.

The riverine landscape that snakes through the city and connects to the mighty Chaophraya River was once home to thriving communities and trade hubs, where boats played a vital role for transport and commuting.

But rapid urbanisation has seen the capital’s population explode and move into ever-higher skyscrapers and condos.

“Former residents in Bang Khun Tian have either moved out of the canal side or left the elders at home” said Kijja Phaukmoungsri, assistant director of the local post office that runs the service.

The need for floating postmen has steadily diminished, with only seven post offices in Bangkok still carrying the service today.

Costly fuel is another downside of boat deliveries, which are 10 times more expensive than distributing mail by road.

But for those still living along the canals, the service is indispensable, even if most of the snail mail consists of little more than water and electricity bills.

“We live along the canal and there’s no road access. For sure, a mail service like this one is much needed,” said Pacharee Kladpipoon, a waterfront villager.