Kiddie fun and commitment in ‘The Glitter Trap’ 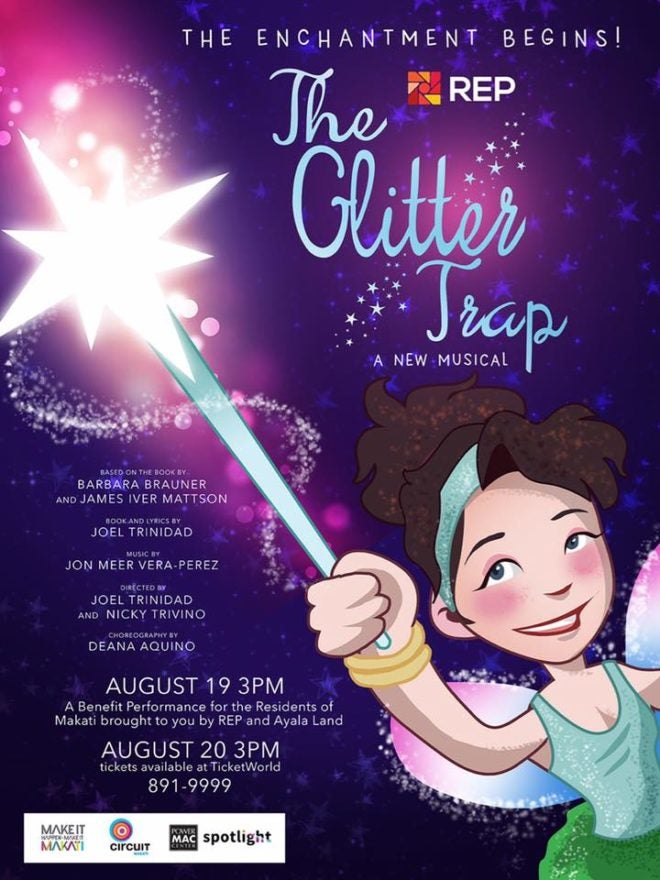 “The Glitter Trap” follows the misfortunately named Lacey Unger-Ware (Rayne Cortez), a middle school misfit whose only wish is to get an internship at the local zoo. One day, Lacey accidentally traps a fairy godmother known as Katarina Sycorax (Francesca Cuenca) in her hair, causing the magical creature to lose her powers—and making her unable to grant the wish of her goddaughter, popular girl Paige Harrington (Michelle Cornejo).

Katarina warns that, according to magical rules, if Paige doesn’t get her wish—to become the lead in the school play
—then Lacey doesn’t get her wish either. Lacey volunteers to assume fairy godmother-ing duties, but finds that juggling magical powers with middle school isn’t as easy as it seems.

In the first run of “The Glitter Trap” in June, there were many things about the show that betrayed its nature as the end product of Repertory Philippines’ Junior Masterclass summer workshop. Several aspects of the production still felt like a work in progress.

But at the same time, as one would expect from a production performed by actors aged 11 to 17, there was a refreshing lack of pretension—a sense that codirectors Joel Trinidad and Nicky Triviño weren’t necessarily out to impress, but to give their young performers a stage on which they could best display their talents and simply have fun.

When the show allowed them to do so, that fun was infectious.

Trinidad, who wrote the libretto based on the young adult novel by Barbara Brauner and James Iver Mattson, chose to keep the book’s Western sensibilities in his own adaptation. This isn’t a bad thing in itself, but there were times when the rest of the show couldn’t quite keep up.

For example, the bare production design didn’t do a lot to sell “The Glitter Trap’s” setting. Likewise, the show stumbled into several static moments, the direction and writing not always possessing the kind of vibrancy one would expect from every page of a young adult novel.

Thankfully, the cast—who really were the main attraction of “The Glitter Trap”—kept the musical’s flaws from leaving too much of a scar. Lead actress Cortez never showboated, and had an endearing awkwardness about her. Cornejo, as Paige, delivered on some unexpectedly emotional territory toward the end, while also being responsible for the show’s funniest gag.

But arguably the most entertaining person to watch was Stacy Tsai, who played Lacey’s best friend Sunny and, despite being the youngest in the cast, radiated enough charisma to light up the theater on her own.

Where “The Glitter Trap” was most surprising was in its original music, composed by Jon Meer Vera Perez, and directed by Adonis Tabanda. Many of the songs, while rousing and upbeat, occasionally entered disarmingly poignant territory. Through songs like “After Midnight” and “Me Without You,” the production transcended the stereotype that young adult fiction is weightless, and said something worthwhile on empathy and our ability to help one another.

This musical wasn’t going to change the world, but it did, at least, become a convincing argument for joining Repertory’s workshops. Despite its flaws, it remembered that the point of a workshop isn’t to create the greatest musical ever, but to celebrate the act of creating art. It’s something that Trinidad, Triviño and the young cast can proudly embrace as their own. —CONTRIBUTED