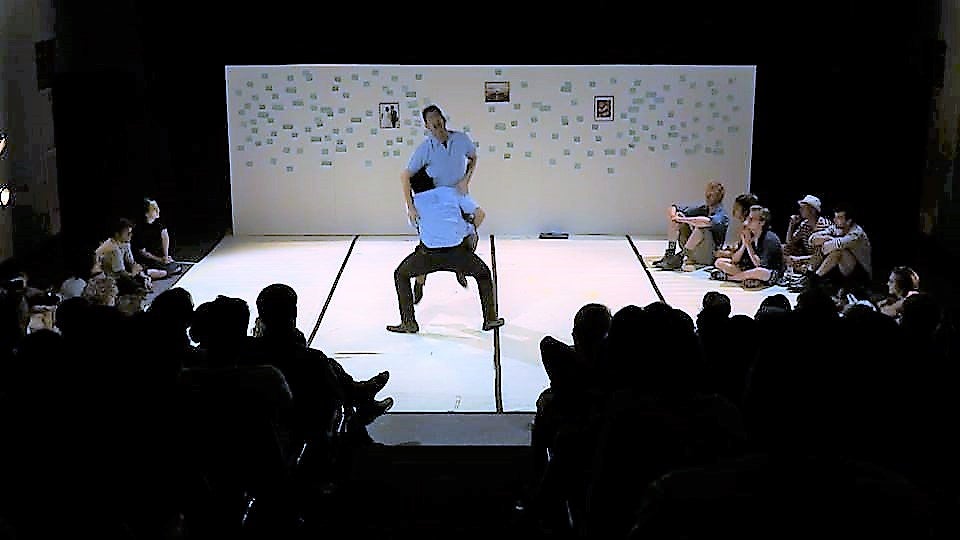 Beyond ‘The Wayside Café’: Young theater voices soar in Shanghai and Segovia festivals

The reactions were unanimous: “Wayside” touched hearts, provoked reflection and demonstrated theatrical mastery. And these words, expressed in diverse ways, poured out from delegates spanning some 70 countries—from Australia to South Africa, Japan to Turkey, Bangladesh to France to the United States, India to the United Kingdom and Uganda, Sri Lanka to Spain, Brazil and Mongolia.

Steven Fernandez, who saw the play in Shanghai, wrote in an earlier story in this paper that “Wayside” was a “poignant portrayal” that “slammed us with the reality of life-death transition.” The show got three curtain calls, the most number given to a festival production.

Other festival productions were just as astounding, and watching these gave me the opportunity to find out how students from different schools are trained to achieve high standards of theater-making. So, beyond dwelling on “Wayside,” I thought it useful to list six aspects of theater training that impressed me the most during these two festivals.

I sum these in six phrases: diversity of theater-making, energizing traditions, richness in training, student empowerment, audience engagement, and commitment to the social.

These impressions, in my mind, signal the shape of the theater to come.

Much of the kind of theater I encounter relies predominantly on talk, song or a combination of both. But other kinds of theater-making can supplement or replace this standard approach. Several of those I saw in the two festivals were performances that displayed mixed methods of theater-making: accompanying talk, song or both (and sometimes with not one of those) were object theater, puppetry, circus acts, gymnastics, intertextual work, and a variety of movement motifs—some based on traditions, others on contemporary expressions and, more frequently, contemporary renditions of traditional performance styles.

The Indonesian Institute of the Arts in Yogyakarta, for example, blazed the stage with “The Legend of Roro Jonggrang,” which fused two types of traditional dance, martial arts, wayang puppet, masks and shadow play. A production from Switzerland’s Academy of Arts Bern, “The Theater of Things,” merged object theater, puppetry and monologues to make audiences reflect on the rituals of everyday life.

Another Swiss production, “The Old Tenant,” this time from Accademia Teatro Dimitri, was a virtually wordless, Ionesco-inspired presentation of a man moving into a new house where people who brought in tons of household stuff then resorted to dance, song, circus acts, magical acts and finger-painting. Actors also played musical instruments, heard voices from a radio and carried fantastic props. Most sumptuous to watch!

Asian theater schools, more so than their European and American counterparts, are more attuned to their respective countries’ performance traditions. But these schools do not simply perform tradition; they play with it and give heritage a modern edge.

Under the baton of the Shanghai Theatre Academy and the National Academy of Chinese Theatre Arts in Beijing, the venerable forms of Chinese opera have undergone experimental treatments by adapting them to western texts. Shanghai’s playful production of Shakespeare’s “The Taming of the Shrew” and Beijing’s masterful rendition of Strindberg’s “Miss Julie” were examples.

India’s National School of Drama, in turn, mounted “Rustam and Sohrab,” a Lear-like play drawn from ancient Indian history, and presented in traditional Parsi style, one laden with heightened emotion and physical language, but experimentally aligned to modern acting techniques.

Our own Mindanao State University–Iligan Institute of Technology’s Iligan Performing Arts Guild began its devised production of the “Orpheus Trilogy” with traditional pangalay movements, but morphed these in contemporary ways to render a gritty, modern tale of lost love.

Other productions pulled out the contemporary relevance of folk beliefs and legends: one about ghosts, as in the tragicomic “No Man Lives There” from the Department of Dramatic Arts, Chulalongkorn University in Thailand; another about babies abducted by wolves in “Fate, Forsaken by God,” staged by the Mongolian State University of Arts and Culture; and still another about a grandmotherly god who wreaks havoc in people’s lives in “Angry Seoul Sam-Sin Grandmother,” a devised piece by students of Hoseo University, South Korea.

Not to be outdone in energizing traditions was Taipei’s National University of the Arts’ “Coming! Coming! Fall from the Mountain Heavily Coming!” an original dance drama based on folk myths and legends.

Indeed, Asia’s one major contribution to global theater lies in the recuperation and experimentation of local literature and indigenous performance styles—a track we in the Philippines can do more vigorously than ever. To do so is not an exercise in orientalism; it is, as I gather from intercontinental audiences, a way of showing alternative ways to tell a story.

To accomplish this range of theater-making, students need to learn more skills beyond acting, movement and vocal work.

As well, most schools immerse students in devising their own work that also includes making their own interpretation of standard texts. Directors, playwrights and designers are part of the process from day one.

The University of Wollongong in Australia, for instance, devised “A Bare Stage,” an abstract piece for five actors seeking to explore ways to express an authentic self. Another Australian company, this time from the Victoria College of the Arts, displayed the students’ acting mettle by taking scenes from Chekhov’s “The Cherry Orchard” and rendering them in time periods (and acting styles) away from the original time.

Singapore’s La Salle College of the Arts wove a collection of show tunes and cabaret performances in a devised revue called “Raise the Roof!” And in Segovia, a South African production, “Judas,” got the structure of Strindberg’s “Miss Julie,” merged it with a South African novel, and had students configure the relationships among the characters, write their own dialogue and plot their own movements. Engrossing to watch!

Granted, many of these schools are conservatories rather than liberal arts degree programs, and thus can afford to give more units for theater training. If so, then ways have to be found for students or young theater professionals to learn these other skills. By owning a more diverse set of skills, young actors are able to bring more to rehearsals and offer a potentially richer source of presentational tools to create, with directors and designers, innovative and stimulating performances.

And by devising their own works, students, directors, playwrights, designers and even stage managers learn to privilege the collective enterprise rather than to dwell on the needs of the ego. —CONTRIBUTED