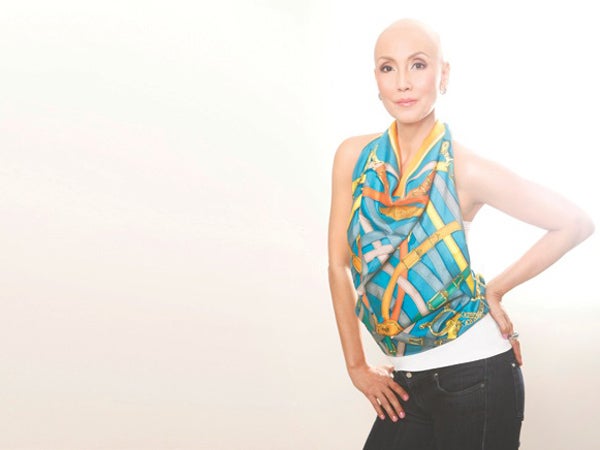 A model of survival: With an optimistic attitude, Tetta Ortiz Matera is beating breast cancer beautifully

Save for the fact that she has absolutely no hair on her head, Tetta Ortiz Matera shows no signs of battling stage 3 breast cancer. Cracking bald jokes and shifting effortlessly from one high fashion pose to another in Hermès scarves and jewelry from Rustan’s Silver Vault during this photo shoot, the former model is clearly winning the war against the dreaded disease. “After my diagnosis, I really told myself that I was going to face this in a different way,” she declares. “I didn’t want to be depressed, bedridden, or angry, or have self-pity.  Negativity wasn’t going to cure me of cancer, and it was just going to affect the people around me anyway.”

Indeed, there was much to be thankful for even when she started losing her hair, a consequence of the chemotherapy. She counts her husband Giorgio, 16-year-old daughter Riana, 12-year-old son Sebastiano  (who has taken to kissing his mother’s smooth pate often), and their stable restaurant business Piadina among her many blessings. “I know I have a great relationship with God,” she adds with certainty, “because even with the cancer, I can laugh and I sleep well at night.”

It was Mother’s Day when the 46-year-old Tetta felt a lump on her right breast, a suspicious growth that wasn’t there the day before she performed a self-breast examination and nowhere in the results of her mammogram two months before. A biopsy revealed it was stage 1 breast cancer, while a lumpectomy in June showed that the lump had grown to stage 2 proportions. But the results of a pathology test dealt her the cruelest blow of all: the presence of five malignant lymph nodes confirmed she had stage 3A breast cancer.

Yes, she was scared and yes, she cried with her kids when she told them. But she also refused to give in to the disease that has defeated many. This, after all, is a woman who weathered numerous health scares before—among them, a miscarriage, a delicate pregnancy with her son, and life-threatening pneumonia. Years of staying fit have also toughened her physically and mentally.  “I don’t spend every minute thinking I have cancer, I really don’t,” insists Tetta, who recently enrolled in Barre 3 classes and started running easy again on a treadmill. “I just want to focus on the positive. Life’s not perfect, but I have so many good things going on, and new opportunities and beginnings to look forward to.”

Women who remain vigilant about their health can expect the same thing. Advocating regular mammograms and self-breast examinations, Tetta says, “For whatever kind of change you notice in your body, go see a doctor. Oftentimes, breast cancer has no symptoms; or in my case, the symptoms could be attributed to perimenopause. But no matter how small it is, just go see your doctor. The difference between life and death is enormous.”  Joy Rojas

Look Magazine is a bi-monthly magazine available in your favorite bookstores and newsstands nationwide. For inquiries, please call (02) 897-8808 local 604.