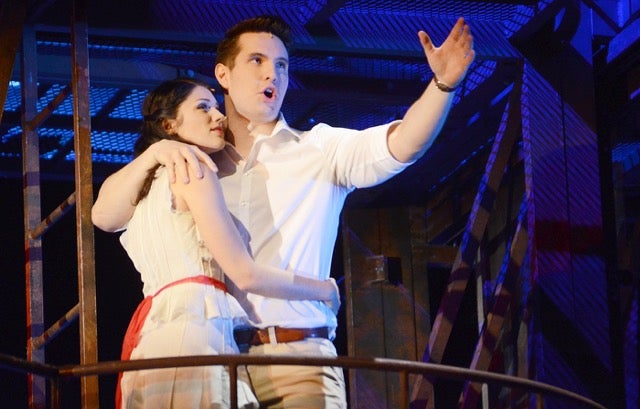 The international touring production “West Side Story,” Broadway’s greatest dance musical, is having a three-week run this month at The Theatre at Solaire until Aug. 27. The production has earlier toured London, Paris, Sydney and Berlin.

The production by Australia-based Lunchbox Theatrical Productions and Concertus Manila has an all-American cast, many  from Broadway.

Conceived as a modernization of the famous Shakespearean tragedy, its audience had—much like the Jets and the Sharks—differences in opinions when “West Side Story” staged its first few shows in 1957; while it was praised in Washington, it was considered a flop in Philadelphia.

Critics however, agreed that the realistic topic, the new vocabulary designed for universal appeal, and the lack of a happy ending made it quite unusual, especially for one that’s designed for commercial entertainment.

It found its audience in London a year later when it premiered at Her Majesty’s Theatre in the West End where it received rave reviews from audiences and critics alike. Somehow, the story of two rival street gangs comprised of immigrants in 1950s New York reverberated strongly across the pond.

“‘West Side Story,’ I think, is one of the greatest musicals and it’s pretty crazy that the problems and challenges the characters face remain relevant today and are pretty universal and everyone can connect to it,” says Keely Beirne, who plays Anita, one of the new arrivals from Puerto Rico and is part of the Sharks.

“And that’s despite the language barrier,” adds Kayla Moniz, one of the Shark girls Francisca. “People see the show and they might know the story on a personal level and feel what the characters go through.”

Thus is the genius of Leonard Bernstein, Jerome Robbins, Arthur Laurents and Stephen Sondheim, whose collective desire to capture the vibe of that era’s teenage gang war in a New York slum district gave birth to an American musical that is both groundbreaking and timeless.

Bernstein’s score combines American jazz with Latin American music and was considered ahead of its time, while Robbins’ iconic dance choreography brings to life the youthful brashness in Laurents’ script.

And then there are the classic songs penned by Sondheim including “Maria,” “Tonight,” “Somewhere,” “America” and “I Feel Pretty,” all of which are well-loved by theater aficionados all over the globe.

“Globe LIVE continues its mission of bringing world-class live entertainment and our partnership with Lunchbox Theatrical Productions and Concertus for ‘West Side Story’ allows us to do just that,” shares Joe Caliro, Globe senior advisor for creative marketing and multimedia business. “Theater fans are in for more top quality productions this year and we are proud to be able to give Filipinos access to more of these kinds of shows. Along with this partnership, we are also giving our customers an exclusive offer for “West Side Story” tickets as the show certainly can not be missed.”

“West Side Story” has been produced three times on Broadway, twice in London’s West End and enjoyed numerous US, UK and international tours over the last 60 years.  The movie version, released in 1961, won 10 Oscars (including Best Picture) and further cemented the reputation of this undisputed masterpiece. —CONTRIBUTED