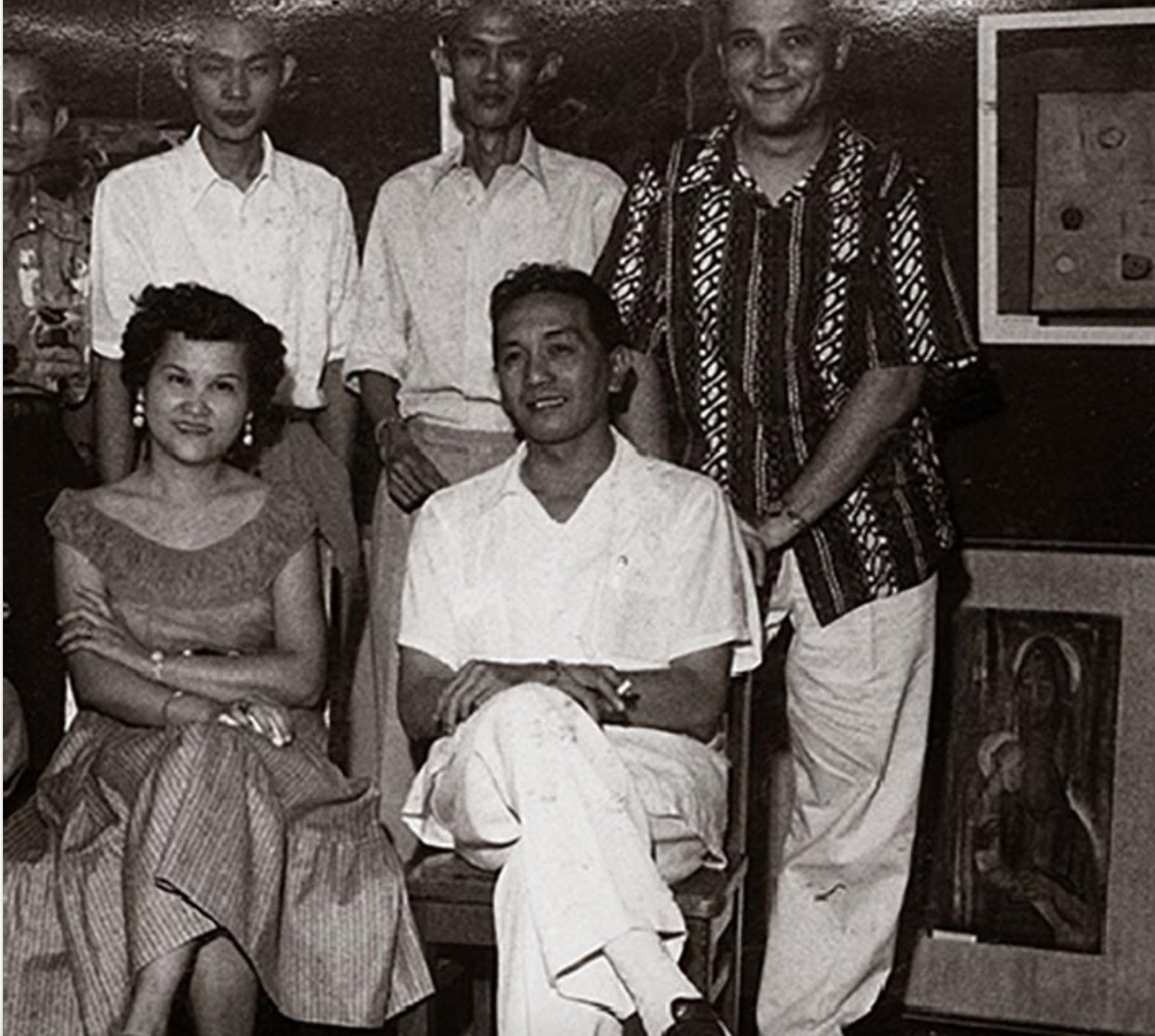 Exhibition will pay tribute to the Philippine Art Gallery (PAG), which was officially founded in 1951 by Lydia Arguilla. It was the first gallery in the country to exclusively offer modern art year-round.

Twenty-four art works from the Anthony Stoner Collection, all of them acquired from PAG, such as early works by  Fernando Zobel, Ang Kiukok and José Joya, will be on exhibit.

Ponce de León and Villegas, as well as Lisa Nakpil, had conceived of the exhibit to pay tribute to PAG and Arguilla.

But while organizing the exhibit, Villegas suddenly passed away on Aug. 6 after a heart attack.

“Lisa, Ramon and I conceptualized the Philippine Art Gallery show when the Anthony Stoner Collection was consigned to the gallery,” Ponde de León said. “All pieces had PAG labels and acquired from the best period of the PAG.  During our usual afternoon tête-á-tête, we decided to have this show and this was in July.”

“Lisa was left to do all the research upon Ramon’s passing a few days ago.” added the León owner.  “It was then that Lisa and I decided to dedicate this show to Ramon, who was an irreplaceable loss for the Philippine art and antiques world.

“Ramon was all-encompassing.  He knew much on anything, from gold to tribal art, old masters to modern art, social history and hierarchy, chismis and  history.

“Now, without him, a big void is left, and many things will be left to conjecture, especially on matters that he had first-hand knowledge of.

“Ramon was frank to a fault, which made him much easier to deal with,” said Ponce de León.  “You can’t have an onion skin with Ramon as he would tell you straight what he thought. Although he might make mistakes, you begun to appreciate him when he unveiled his knowledge generously on the rationale and justification of his thoughts.  I, personally, in such a short span of time, have learned so much from him.  It is sad to lose him this early.”

“Not too many collectors of art know that the Philippine Art Gallery was the first gallery entirely devoted to modern art,” said Ponce de León.

“(PAG) artists were the ‘revolutionaries’ who strayed from the conservatives led by Fernando Amorsolo,” the León owner explained. “It was difficult to be a modernist in the 1950s as it was unpopular to collect modern art in a Philippine context.  [This changed] thanks to Lyd Arguilla, the founder of PAG, who wrestled her way to found the gallery, that today is the benchmark of the best of Philippine modern art.”

In her exhibit essay, Nakpil writes that perhaps the most important facet in the development of Filipino modern art was the establishment of  PAG.

Nakpil explains that when  Arguilla came home from the United States, she and other writer-friends opened an advertising and promotions agency called Promotions, Inc. They hung modern paintings on the walls of their office. This office on Azcarraga Street in Manila came to be known as Philippine Art Gallery.

PAG hosted monthly solo exhibits of new paintings in the gallery. Among the artists who first exhibited at PAG were Romeo V. Tabuena, H.R. Ocampo, Nena Saguil and Arguilla herself.

PAG moved to Petrona Apartments on Taft Avenue, which was a suitable location for the modernist enterprise: It was one of the first Manila buildings in the Bauhaus tradition.

In June 1952, PAG began with 50 charter members. The first list would read like a who’s who of Philippine modernist art and letters. It was envisioned as a sort of artists’ collaborative or cooperative.

Purita Kalaw-Ledesma would call Arguilla “art’s nursemaid and housekeeper,” as she was known to coax artists into producing more works and to turn them in on time. Arguilla set up PAG Framers to provide adequate services for the artists.

Arguilla sought to be inventive. She would come up with raffles and special sales. There would be French lessons,  a section on cartoonists (with on-the-spot caricature-drawing), painting classes by Arturo Luz, Virgie Ty-Navarro and Florencio Concepcion, even classes on flower-arrangement. There would also be photography exhibitions and poetry readings.

Inevitably, PAG turned its eyes overseas. Arguilla set about hatching a plan to bring 102 works of some 28 modernists. It was such  a success that she stayed away for over a year, leaving PAG in the hands of her half-brother, Pepe Reyes, and a good friend, Cora Valencia.

Without her charismatic and obsessive presence, however, PAG began to falter. While PAG ran for 18 years, its artists would dominate the Filipino art scene for more than half a century.

Also an important piece is Arturo Luz’s 1957 untitled work of a gray chair.

Another significant piece  is Joya’s 1959 oil-on-wood, “Blue Horizon.” At 20 that time, Joya is described in the catalogue as “probably the youngest artist in the PAG group.” He was also selected as one of the featured artists in PAG’s first international exhibit in New York City and Washington DC.

In 1957, Zóbel devised a unique abstract idiom—the “Saeta (Arrow)”—and PAG was where he first exhibited it. Zobel’s 1958 oil-on-canvas, “Saeta” 44, will be showcased in the upcoming exhibit.

Saguil’s 1953 oil-on-wood “The Family,” will also be on display. It features a traditional thatched hut and tail of a rooster, a thoroughly Filipino scene.

Ponce de León said the fabulous modernist works are from the collection of Anthony “Tony” Stoner (1920-2014), an architect working for Adrian Wilson Associates, who was assigned to the company’s Philippine branch.

“Tony and his wife Marjorie (also known as ‘Fifi’) arrived in Manila in 1957, living and working there for many years,” said the León owner.  “In 1973 he was promoted to vice president of the company.

“Tony and Fifi were avid collectors of art and artifacts from many cultures in Asia and South Asia, purchasing several paintings from PAG shortly after their arrival. They acquired numerous Philippine ethnographic, religious and historical objects as well.

“Mid-Century Moderns: Important Modernist Painting from the Philippine Art Gallery” will run on Aug. 29 to Sept. 9 at León Gallery.