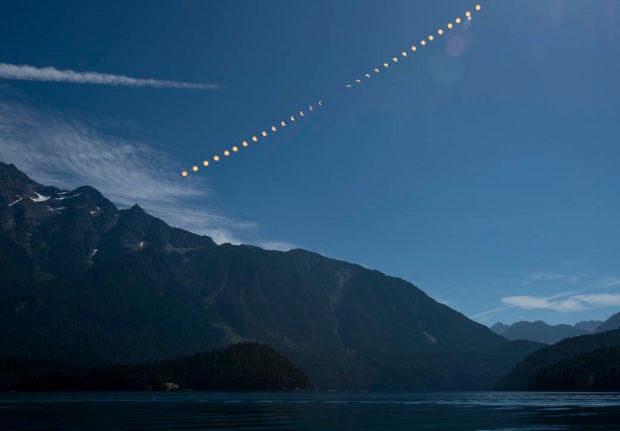 This composite image shows the progression of a partial solar eclipse over Ross Lake, in Northern Cascades National Park, Washington on Monday, Aug. 21, 2017. A total solar eclipse swept across a narrow portion of the contiguous United States from Lincoln Beach, Oregon to Charleston, South Carolina. A partial solar eclipse was visible across the entire North American continent along with parts of South America, Africa, and Europe. Photo Credit: (NASA/Bill Ingalls)

An infant born on the day of the so-called Great American Solar Eclipse received a unique name to mark the occasion, reports ABC News.

She and husband, Michael, were considering “Violet” but changed their minds at the last minute, recognizing the significance of the historical day.

Eubanks, who went into labor at midnight, had initially planned to watch the eclipse with their two-year-old daughter.

The mother of two believes that her second daughter’s birth on eclipse day was “meant to be.”

Her nickname? “We’re probably going to call her Clipsey.”

South Carolina was one of the 14 states treated to a total eclipse where the moon completely covered the sun. A partial eclipse was seen in the rest of North America and parts of Africa and Europe.  Niña V. Guno /ra

IN THE KNOW: Solar eclipses