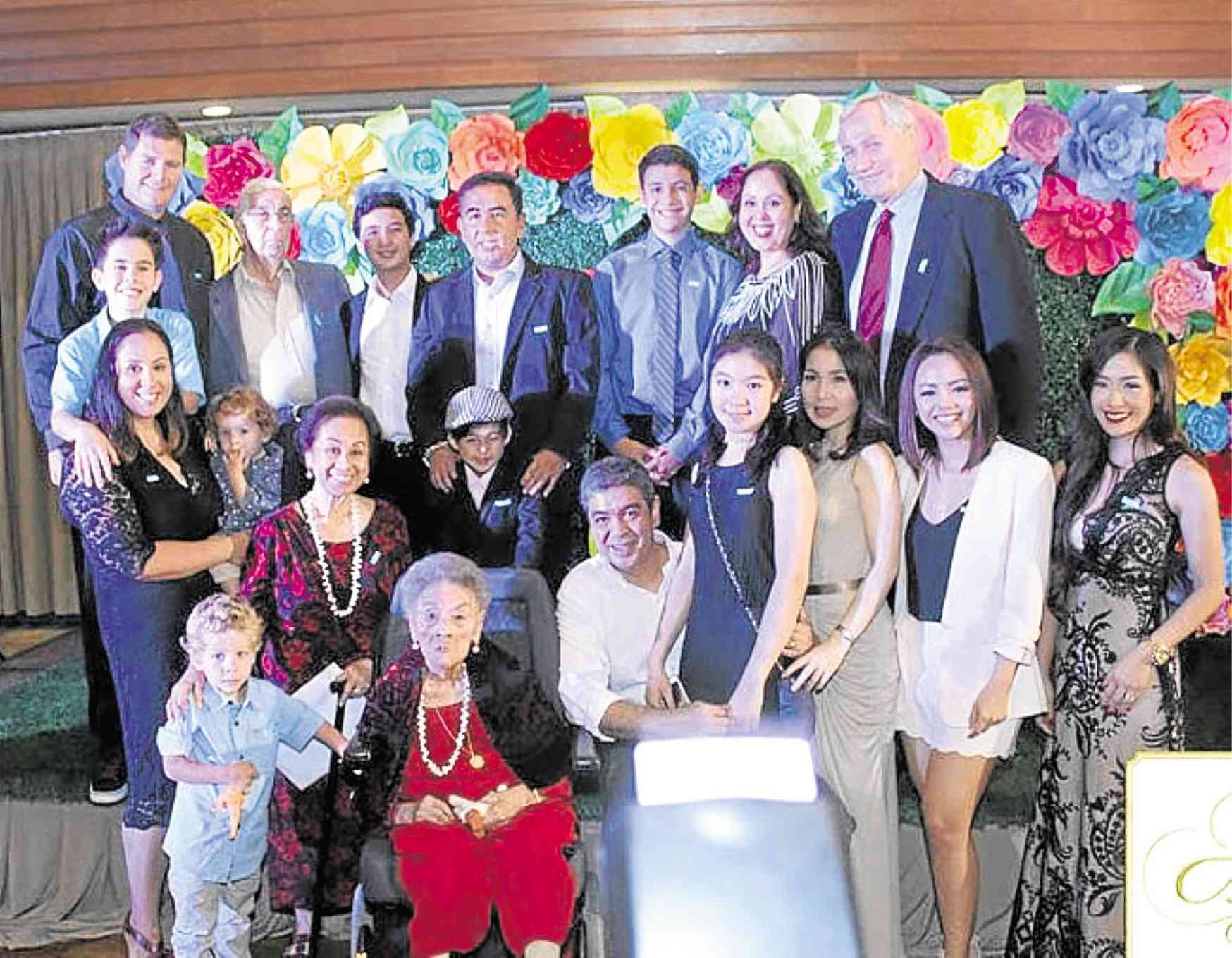 The Anton “famille” from Baguio, Manila and Hawaii

The grand ballroom of the Manila Polo Club was the venue for the birth centenary of Africa Valdes Reynoso, the grand matriarch of the Valdes-Reynoso clan, palangga!

The youngest of 10 children of Emiliano and Eusebia Valdes of Angeles, Pampanga, Lola Afric married the late Jose L. Reynoso of Pasig, the first architecture board topnotcher of the University of Santo Tomas. They’ve had nine children, 18 grandchildren and two great grandchildren.
Half of the big family traveled from abroad to make it to Manila—from Los Angeles, San Francisco, New York and Hawaii.

Aside from Pampanga, relatives came from Baguio and Nueva Ecija, and even from Cebu, Palawan, Davao.

Emcee was eldest grandson Jay Jay Araullo, who called on the nine children and their respective families for souvenir photos with the matriarch. Guests were served finger food, lechon and soup before being asked to proceed to the sumptuous buffet.

Menu was meticulously chosen by youngest daughter Lorrie R., who had studied at the Cordon Bleu in Paris and who became the first Filipino to teach at the Institute of Culinary Education.

The big surprise, palangga, was when daughter Edna Anton introduced Lola Afric’s “10th child,” none other than mogul Hans Sy, with his wife, my palangga Carol Tancuan Sy. According to Edna, Hans, who was a classmate of Lola Afric’s  youngest son, Benedict, used to spend his summer vacations in the Reynoso home in Baguio. Sy was only 18 when he asked Lola A if she wanted to be a partner in his first business venture, putting up an outlet of Sizzling Plate at the SM Food Court in Makati. He had apparently been impressed by the success of the Sizzling Plate restaurant opened by Reynoso daughter Mia on Pasay Road, Makati, with the expert guidance of her mom.

Reynoso’s oldest daughter Leni Araullo delivered a thank-you speech after explaining the significance of the doves and hearts in the awesome cake, “a labor of love I created for our beloved mother.”

The Reynoso grandchildren, Martin, David and Katrina, organized the memorable evening, from the famille tree photos at the entrance to the video presentation, photographers, sound system, the band, invitations and giveaways. Table and seating arrangements were done by Lia Manalac del Castillo of Events by Lia, dahlings.

Louis Vuitton Philippines celebrated the opening of its second store at The Shoppes, Solaire Resort & Casino.

Guests were invited to take a look at the exotic crocodile leather Petite Malle, designed by artistic director Nicolas Ghesquiere.

In celebration of the store opening, a uniquely Filipino icon, the jeepney, was especially designed and hand-painted onto a Louis Vuitton hard-sided Alzer trunk. Wow!

The seven-foot motion-activated interactive wall of the Manila skyline was a prelude to the after-bash at a transformed gallery space where guests grooved to the beats of DJ Katrina Razon and Australian DJ duo Flight Facilities.