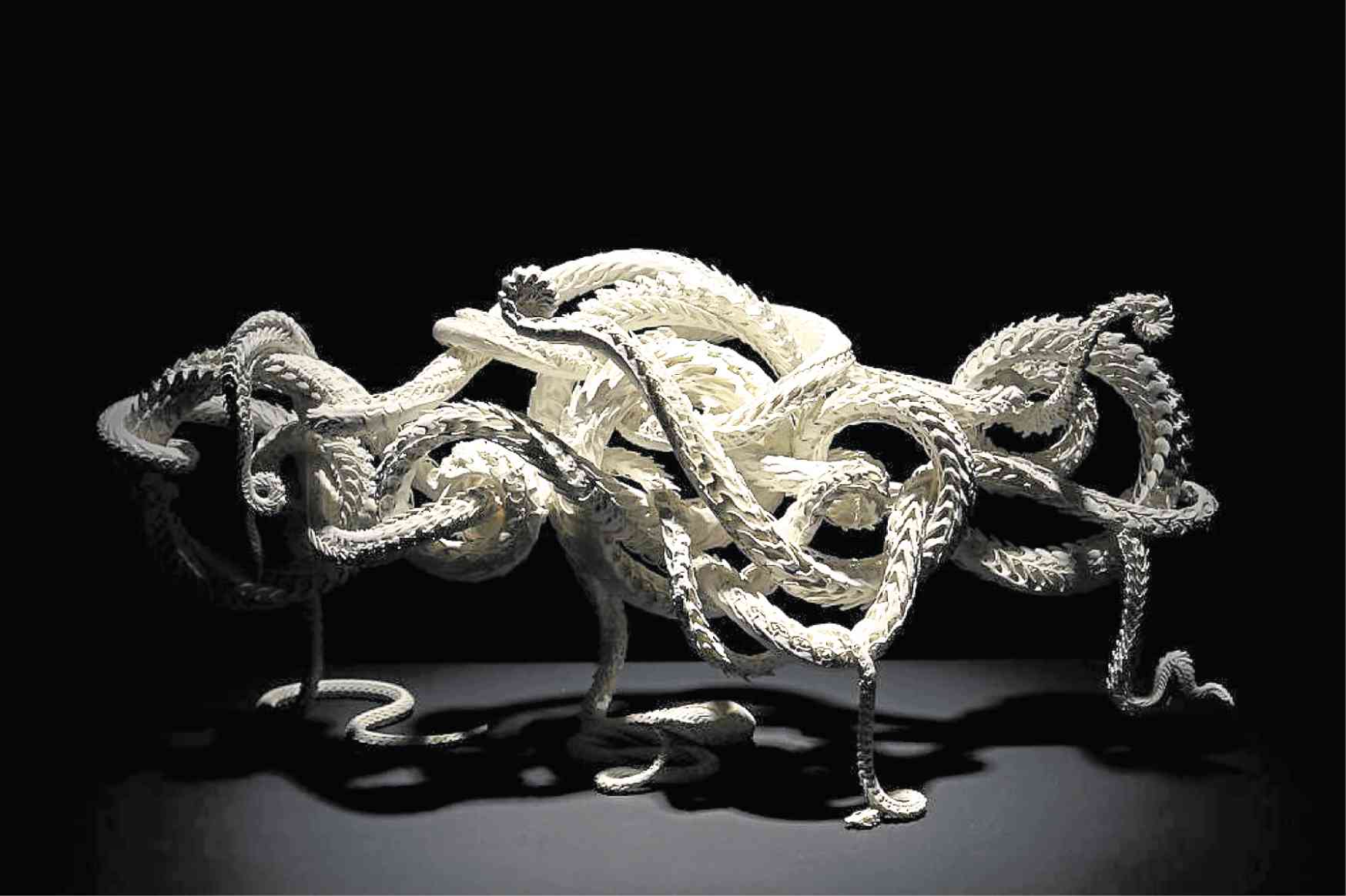 SINGAPORE—Like a serpent that molts and sheds its skin to renew itself, Bulgari’s Serpenti Form art, design and jewelry exhibition in Singapore is not exactly like its first installment in Rome in 2016.

“Such as the snake changes its skin, this exhibit will also be evolving all the time,” Lucia Boscaini, Bulgari brand and heritage curator, told Lifestyle at the exhibit’s preopening last week at the ArtScience Museum in Marina Bay Sands.

For starters, the show in the Lion City is nearly three times larger than the first edition in Rome, and boasts over 150 pieces of antiquities, contemporary art, photography, costumes, and jewelry all inspired by the snake.

Serpenti is one of the Italian jeweler’s most iconic brand symbols, interpreted in watches and jewelry since the 1940s, and now also appears in leathergoods, accessories and eyewear.

Bulgari’s connection with contemporary art is deeply rooted. While putting together a coffee-table book called “Serpenti in Art” two years ago, Boscaini and her team were faced with so many fascinating materials that couldn’t go into the tome, that they decided to stage an exhibit.

“A book can be beautiful but static,” Boscaini said. “An exhibition is a very immersive and emotional experience. In Rome, we didn’t expect the immediate positive feedback from both the press and the audience; we even had it extended. When we saw the interest, that’s when we conceived the Singapore exhibit.”

With the limited space they had in Rome, Boscaini had to exclude the works by Asian artists. She finally got to show them in Singapore.

While the snake is a universal symbol, Boscaini found most interesting in her research the different, sometimes conflicting values linked to it by different cultures.

“In my personal background, it’s a negative symbol, [it stands for] temptation,” she said. “On the contrary, there are many positive interpretations—a talisman, protector, symbol of fertility, healing, medicine, eternity, circle of life. Frankly I didn’t imagine [to find out all of] that at all, it was enriching.”

The exhibit, which runs until Oct. 15, features antiquities from the East and the West, like a statue of an Eastern Han dynasty tomb-guardian deity holding snakes and a statue of a young Hercules strangling snakes, both from the 2nd century AD. There are also snake jewels from ancient Rome.

There are various works by eminent artists, from Joan Miro to Marc Chagall to Keith Haring, as well as photography by Robert Mapplethorpe and Helmut Newton.

“Snakes have so many interpretations, not only in terms of value—rebirth, healing, evolution—but the aesthetic interpretations are also so different,” Boscaini said.
“That’s the main criteria we followed in the selection of artworks here. There had to be different perspectives, and the provenance of the artists was very important—East, West, and by country as well, because the Japanese interpretations are so different from the Chinese. There’s also a variety of materials—wood, bronze, marble, paper cuts, textile, photography, ceramics. We also considered the techniques.”

A couple of her favorites are those by Chinese artist Wu Jian’an, “The White Snake hid immediately,” that appears like a textured oil painting from afar, but is actually of the traditional Chinese art of paper cut, with intricate images of three-headed serpents, dragons, skulls; and contemporary artist Niki de Saint Phalle’s playful snake figures of painted fiberglass or polyester.

Boscaini also included various costumes from cinema and theater—from Jaye Davidson’s Ra costume from the 1994 movie “Stargate” and a robe from Bernardo Bertolucci’s “The Last Emperor,” to an elaborate opera costume for “Turandot” from 1926 and a snake mask made for Lady Gaga.

“It was so fun. Majority of them were borrowed from private collectors and museums, so it was a mix of everything. We wanted some irony, some lightness to the darkness.”

In Bulgari, the Serpenti evolved from the minimalist Tubogas watch with a very tiny head to the more realistic contemporary interpretations featuring the scales of the reptile and, most recently, the focus on its head and eyes in designing jewelry. Now there are also leather bracelets that feature the viper’s head.

At the exhibit opening, guest star and Academy award-winning actress Alicia Vikander wore a Serpenti necklace with a large snake’s head pendant. It complemented her earrings—a snake’s head on each lobe.

“It’s a versatile kind of icon,” Boscaini said. “The snake is very daring, but this ring [featuring a viper’s head] is very delicate, very feminine, and wearable. Our Tubogas watch is daring and cool as well but it’s very now. It’s discreet. I also like that the attention now is all in the head and eyes. It’s completely different from the past, but is an example of how Bulgari is able to go farther. The icon is the same, but it’s a revolutionary design.”

At the Serpenti Form exhibit, one room is devoted to pieces from the brand’s heritage collection showing the evolution of the Serpenti. Included also are a couple of one-off high jewelry pieces, a necklace of uniquely cut chalcedony with diamonds and rubies, and a two-headed Serpenti watch of pink gold and diamonds.

Boscaini dispels any ideas that the exhibit is only for jewelry and art connoisseurs and collectors.

“We’re not an art foundation or museum, so we don’t want to offer a didactic experience,” she said. “We want an emotional experience, a form of entertainment but with content. It’s not at all addressed toward intellectuals or art historians and art experts, but for anybody interested in beauty.”

Those who will see it in Singapore shouldn’t expect the same when Serpenti Form moves to Tokyo in November, said its curator.

“The exhibit is evolving. We don’t intend to replicate it. In Bulgari that’s our normal attitude. We will keep adding. While we maintain the theme, the content will evolve with new artworks, research, digital displays.”