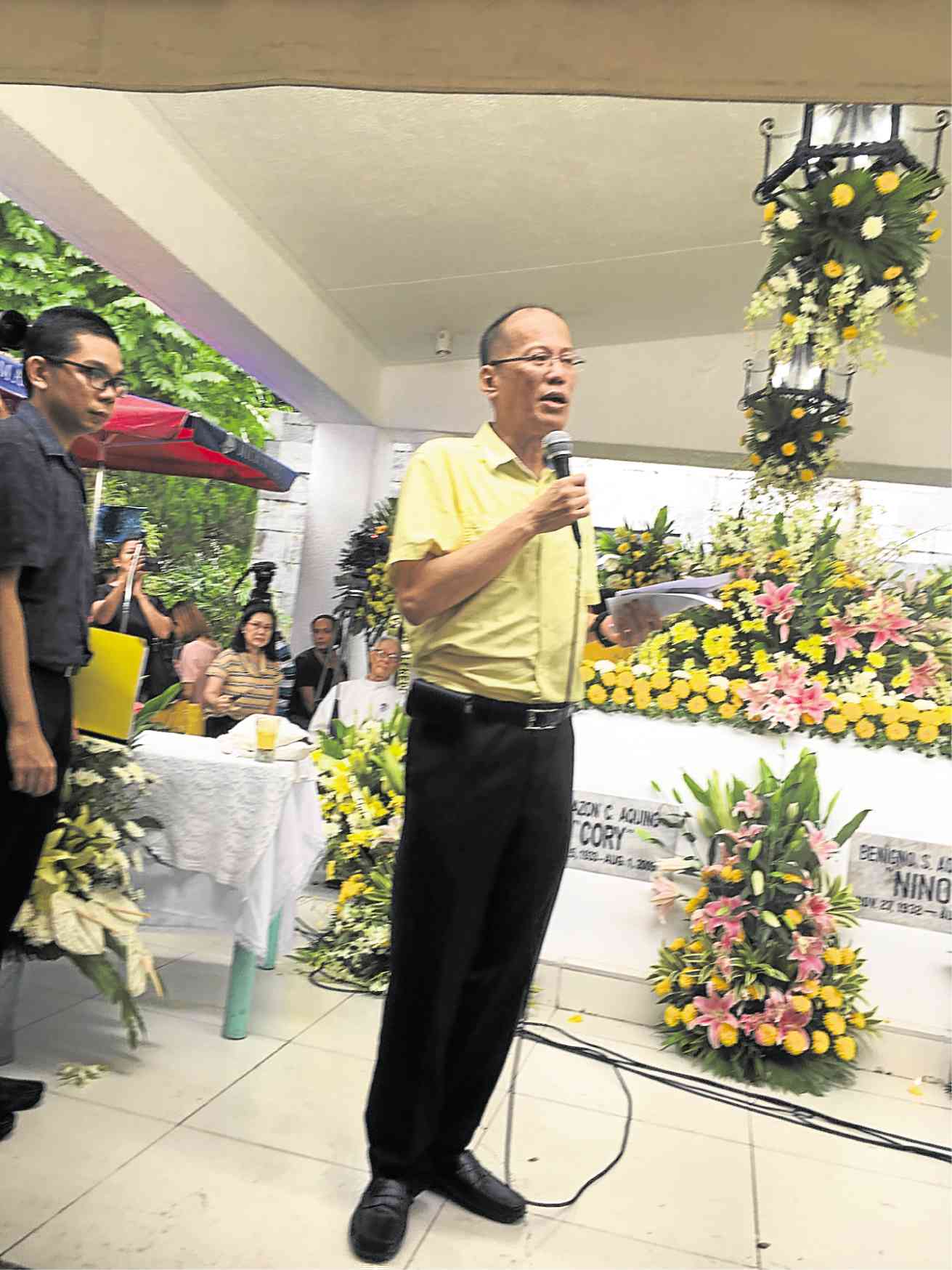 Yellow ribbons were tied around trees leading to Ninoy and Cory’s final resting place. There seemed something different and yet familiar in the air. More people came for the occasion this time despite the bad weather. Last year there were more seats than people, according to someone who has never missed it.

Vergel and I ourselves, for the first time, somehow felt compelled to go—and go against a long-standing personal understanding that cemetery time is private family time. Anyway, the occasion this year seemed charged with a new, yet familiar, energy, and we wonder if it had to do with the times—the sort of times in which people are driven to seek refuge so desperately they turn to the memory of the greatest champions of their time.

We may have felt that way ourselves, our own hearts filled with great dread from the past week, when policemen began prosecuting Duterte’s war on drugs with a new intensity following discoveries of huge amounts of drugs smuggled in from China and scored kills at a higher rate than ever—32 in one 24-hour campaign alone.

One case stood out for its brazenness and indiscriminate brutality: a 17-year-old 11th-grader, Kian Loyd de los Santos, who, witnesses said, had simply happened at the scene, had been killed, shot three times in the back.

The war on drugs has turned out to be the great monster of Duterte’s presidency, one that has taken a notorious life of its own. Apparently, it recalls for many Ferdinand Marcos’ own monsters, the ones Ninoy and Cory had to battle themselves, and that’s why they trooped to their graves.

There they came to pay their respects as well as vent their outrage and say their prayers and sing their old songs of protest. They came for soothing company and for mutual reassurance that life, liberty and truth are what they are about. They came to work up, together, the courage against the horrors of the time, and what more inspiring place to do that than by the grave of the martyred one.

Ninoy and Cory’s inspiration was, meanwhile, made palpable and more intense by their living heirs, mainly by their son, whose own presidency is only naturally missed.

He arrived amid cheering and unabashed display of affection and refused not only to sit in the front row, as only fitting for family, but to sit at all. He said his parents would not look kindly on him if he sat while many women were standing. The comment sent not a few men already seated up on their feet.

Throughout the Mass, he stood outside the tent under an umbrella that did not completely stop the dense shower drenching him. How consistent: Among his first presidential acts was to outlaw wang-wang, the car siren that had become a symbol of power and privilege; it has begun to come back.

For sure he wasn’t perfect. He had a tendency to lean too heavily on democratic consensus and thus default on his authority. But he had good economic numbers, and people felt safer during his watch than at any other. He brought decency to his office, something especially missed today.

After Mass, Noynoy stood in front of the sizeable crowd, talking extemporaneously in his folksy vernacular, a style I loved until, as president, he started reading speeches too fast, as though he wanted to get it over with.

He spoke of the killing of Kian, likening the boy’s mother’s grief to his paternal grandmother’s, Doña Aurora’s, when she first laid eyes on her son’s bloodied corpse. He showed us a newspaper clipping of her, her head hanging limp in shock and agony. The only sign of life was a hand clutching the shoulder beside her—Sen. Lorenzo Tañada’s. Later she would say, “Nothing, not even the death of a husband, comes close to the pain of a mother who has to bury her own child.”

No matter how many times I hear Ninoy’s story, I weep.

Noynoy didn’t in any way present himself as a superhero. He preferred to do his boss’—the people’s—bidding at whatever cost to him, and yet the crowd seemed to have come not only for his mother and father but for him, too, as if he had yet to fulfill a family destiny.

He felt disappointed himself. It’s all right to have problems, he said, but after 34 years these should have eased. Instead, he continued, they seemed back with a vengeance. Noynoy recalled an atypical message sent him by Duterte on the occasion, which he hoped the President would read and reread from time to time:

“Even at a time when hope was lost, he remained steadfast in his struggle to restore democracy through nonviolent means. His deeds have taught us that we should always aspire for the common good—even when one must go against the grain—and do what is necessary.

“May this year’s commemoration continue to strengthen his legacy of promoting solidarity and patriotism among our people especially in these troubling times. Through his words of wisdom, let us reflect on his life and realize that, indeed, the Filipino is worth dying for.”